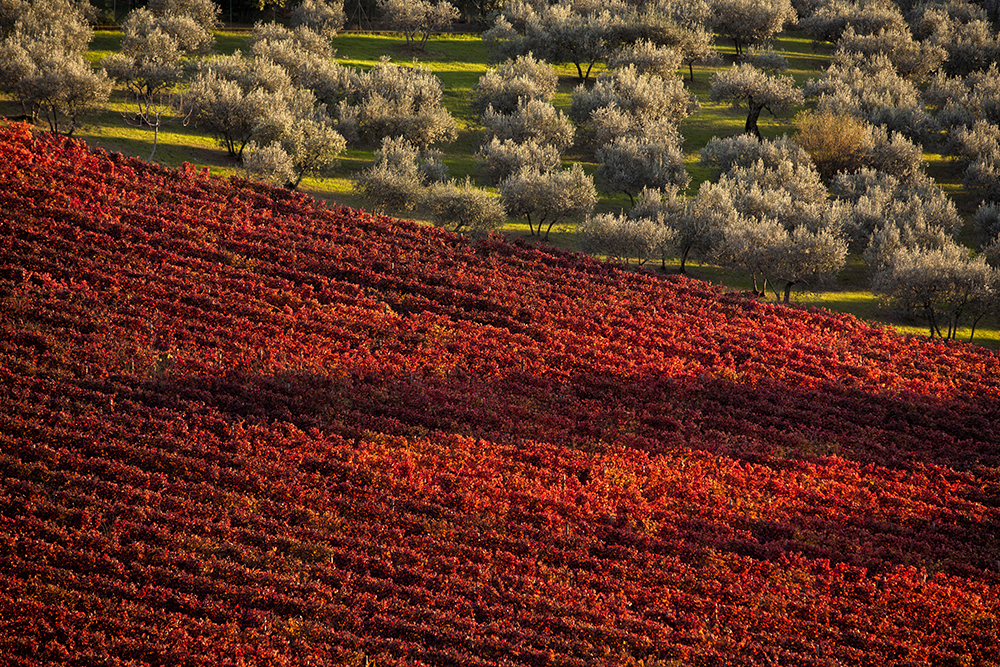 Montefalco is one of the most beautiful villages in Italy, a treasure chest of just over five thousand souls, known throughout the world for the production of the fine wine from Sagrantino grapes. 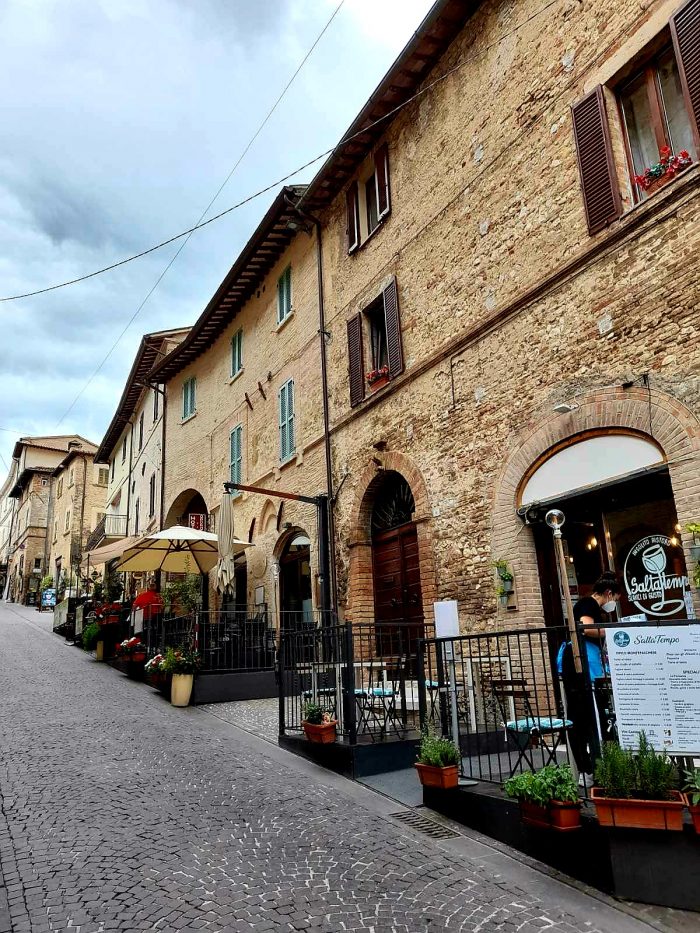 The hills of the village are planted with vineyards and olive trees in a unique play of colors. Inside the ancient walls, churches and artistic works of inestimable value make Montefalco a place to visit, not only for its rich history of wine.

At one time, in medieval times and, probably even earlier, in the village, called the “railing of Umbria”, enclosed by fourteenth-century walls, the cultivation of grapes was practiced within the city walls. A very ancient production,  which can be found in the work of Pliny the Elder, Naturalis Historia. Pliny pointed out that the Itriola grape was grown in the areas of Mevania (today’s city of Bevagna, included in the production area of ​​Sagrantino di Montefalco) and in the Piceno area. Despite these testimonies, it is difficult to establish the exact origin of the Sagrantino grape. The most accredited hypothesis indicates the introduction of the vine around the 14th-15th centuries by the Franciscan friars, returning from their prayer trips to Asia Minor. 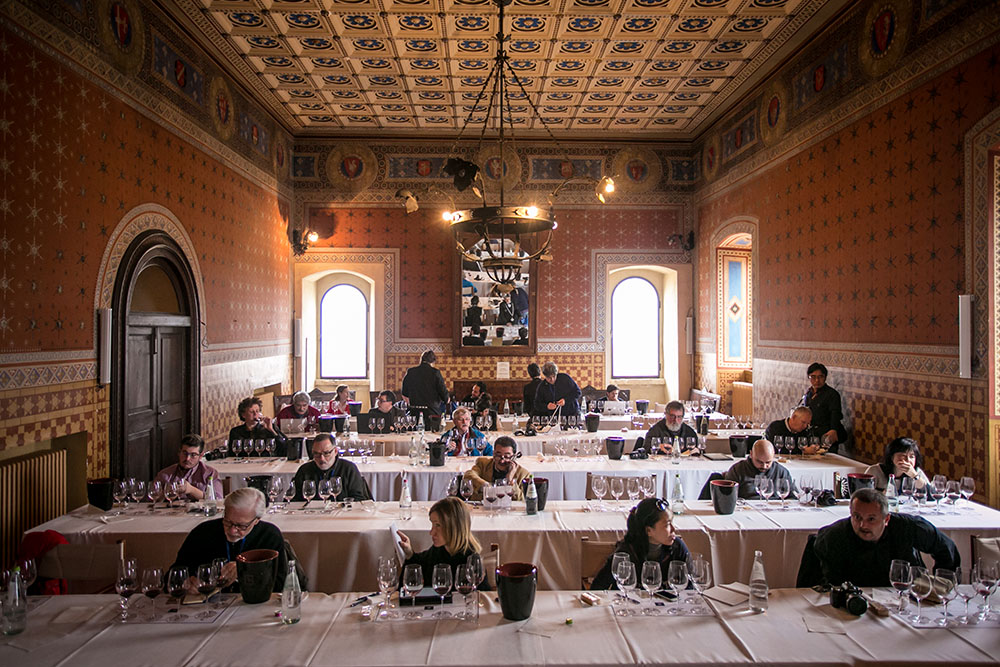 From the moment in which the cultivation of grapes began in Montefalco, it became the fulcrum of the local economy. For this reason, specific laws were instituted for the protection of wine production, as evidenced by the documents preserved in the Municipal Historical Archives of Montefalco. Unauthorized grubbing up, for example, was prohibited.
The vineyards and the grapes were also protected by special laws that prohibited unauthorized grubbing up and established the start of the harvest. 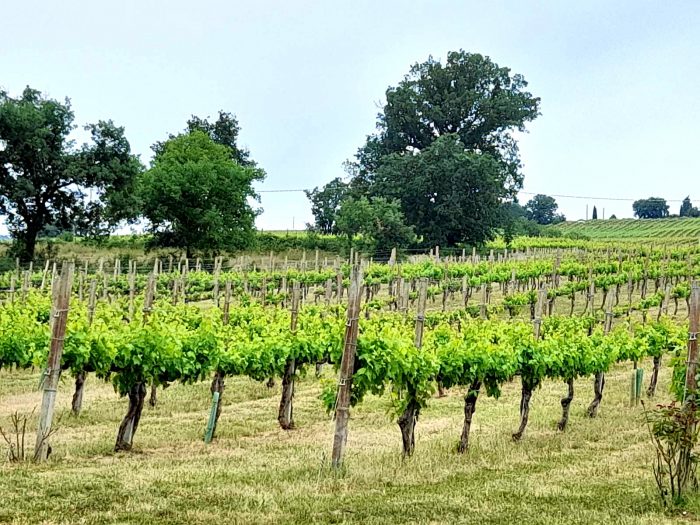 During the Umbrian Exposition of 1899, Sagrantino obtained official recognition as a “dessert or superior meal” wine.
The etymology of the name seems to be traced back to the Sacraments (from the Latin “Sacer” – Sacred). Many historians believe, in fact, that the name is linked to the sacred use, as the Wine of the Holy Mass. History confirms that the Sagrantino vine has been handed down for centuries as a sweet and fragrant wine also thanks to the Benedictine monks who kept it within the convent walls. 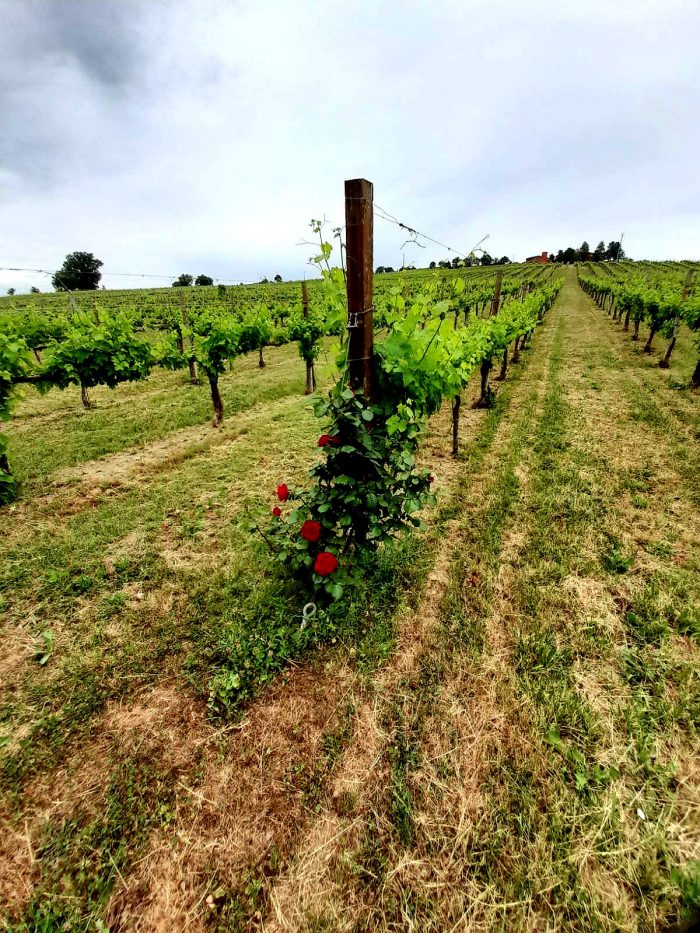 The most ancient history of Sagrantino is linked to the production of sweet wines but it is the more recent “dry” version that has consecrated this wine in the panorama of the great Italian reds. The first dry experiments began only in the 1970s. An expensive and difficult operation which, however, gives a very high quality nectar. It was this turning point that contributed to the recognition of the D.O.C. and the D.O.C.G.
In 1992, Montefalco Sagrantino obtained the recognition of the Italian quality system as DOCG wine (Controlled and Guaranteed Designation of Origin). The production disciplinary establishes that the wine can be produced exclusively with Sagrantino grapes in the municipality of Montefalco and part of the territory in the municipalities of Bevagna, Gualdo Cattaneo, Castel Ritaldi and Giano dell’Umbria, in the province of Perugia. 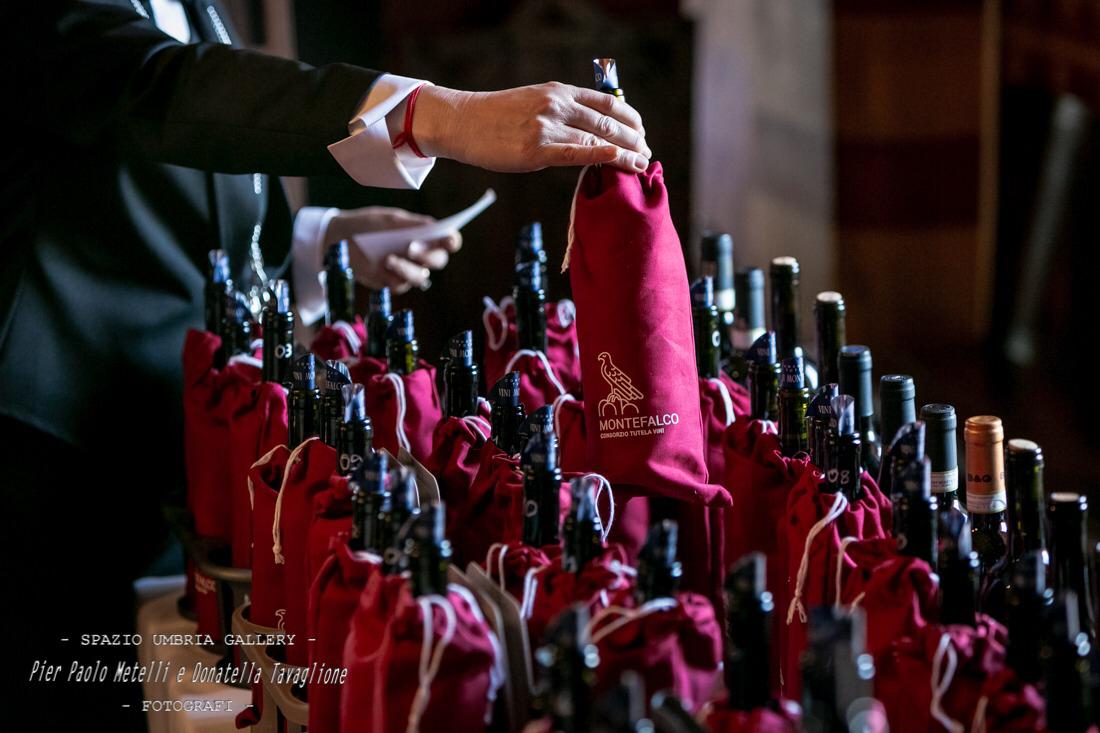 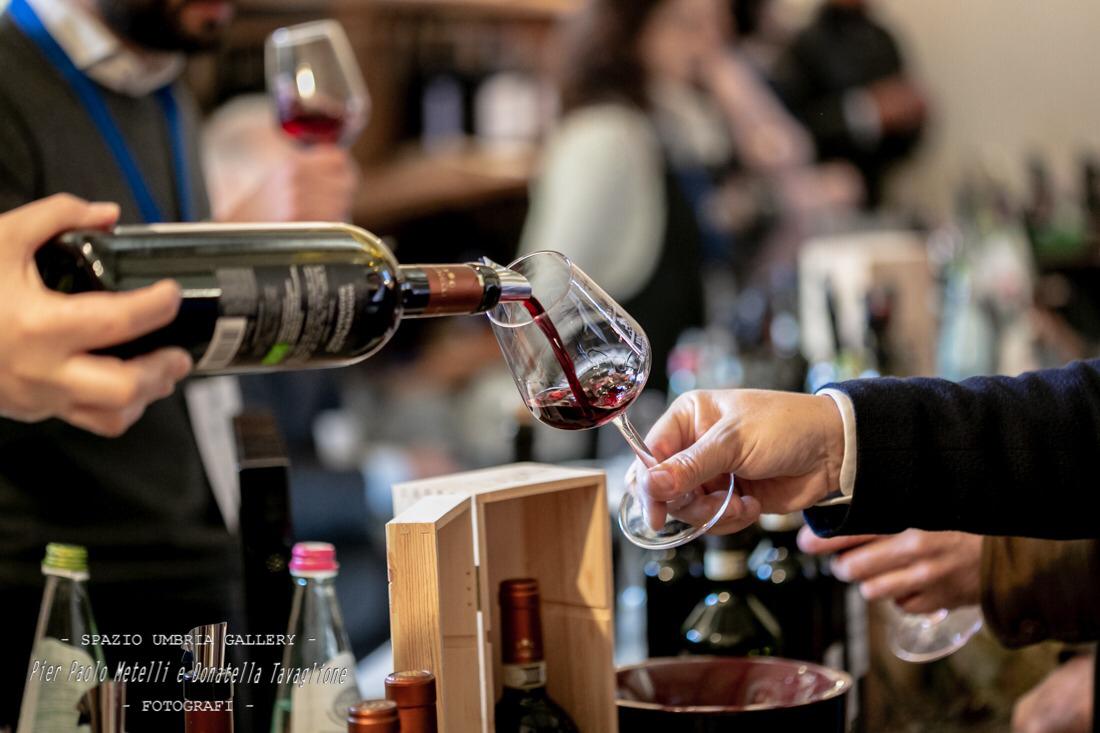 In the same DOCG production area, the production of Montefalco Rosso and Montefalco Bianco wines is also defined, both recognized as DOC (Denomination of Controlled Origin).
Both Montefalco Sagrantino Passito and Secco (“Secco” tr. “dry”), before being put on the market, must have undergone a further period of refinement in the bottle of at least 4 months. 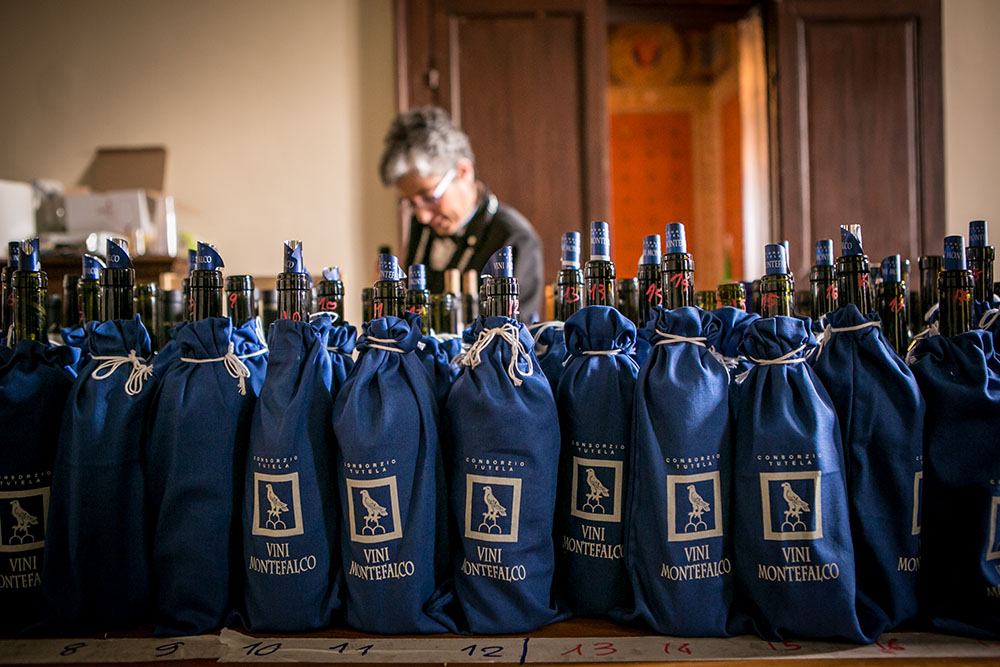 Sagrantino is one of the wines with the highest concentration of polyphenols, thanks to the thick skin, rich in tannins that protects the grapes from attacks by bacteria and parasites and has beneficial effects in the context of cardiovascular diseases and senescence.
A glass of Sagrantino isn’t just wine, it’s not just fine wine either. A glass of Sagrantino is the story of a territory and its people. People so talented to create, over the centuries, a wine capable of leaving an indelible mark on wine history.

PhD.
Her scientific papers have been published in some of the most renowned international literary academic journals.
Italian based writer and magazine contributor.
Author of six books, some of her works have appeared in the most popular International Food magazines.
Food Connoisseur.
EVOO Communicator. Founder of the EVOO Column at "The Wolf Post".
Writer| Translator| Communication Manager at "The Wolf Post", since the birth of the platform.

She has always lived in the countryside. She has learned to "get her hands dirty", working and reaping the benefits of the fields, since she was a child. She participated in grape harvests, olive picking and assisted in the subsequent stages of production.
Food & Wine tourism were the family holidays that educated her on the subject.