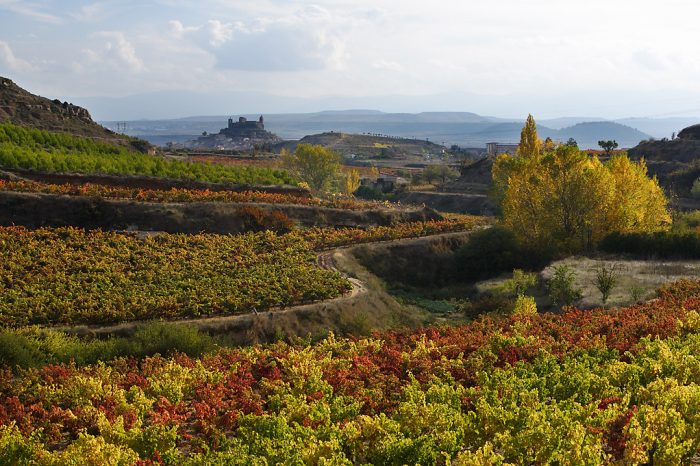 The Rioja Alta Wine Route is an Association created precisely to guarantee tourists a varied and high-level wine tourism experience, as well as to make the wonders of one of the most evocative and interesting areas of Spain even better known.

The visitor has many options to choose from among guided tours, tastings, but also the discovery of the territory and its traditions.

Let’s find out more about the Association and its activities from the words of Begoña Jiménez Díaz, President of the Route. 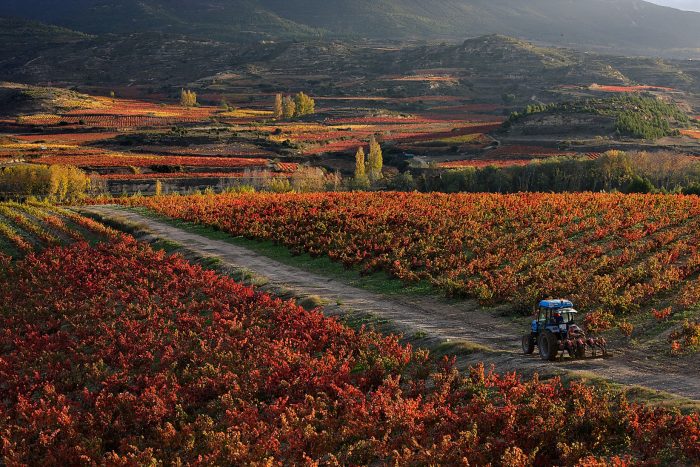 Since your Association was born to date, what goals have you achieved and what remains to be achieved?

The Rioja Alta Wine Route was certified in 2013, after many years of work to improve the tourist destination to meet the requirements of the product manual of the Spanish Wine Routes.

All these structures have a guaranteed quality level that is periodically verified both by the Road itself as well as by the Wine Roads of Spain, for its internal improvement and the competitiveness of the companies. Today, the Rioja Alta Wine Route is now one of the most visited in Spain and the Rioja destination is a leader in wine tourism.

The goal is to continue working together with companies to achieve quality and sustainable tourism, promoting marketing and improving the positioning of the destination through promotional actions. The objectives pursued are the strengthening and dissemination of the brand image as a destination of tourist interest, developing the offer of the destination in a differentiated and specialized way relevant to the interested public, improving and increasing the presence, dissemination and marketing of the product, increase the number of travelers and overnight stays. 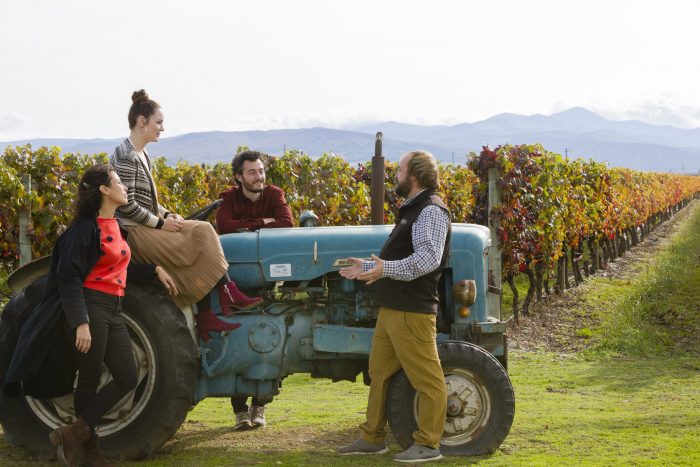 Through which services/activities do you promote the dissemination of the Rioja Alta Wine Route?
Through all digital media: web, social networks, blogs…
The Rioja Alta Wine Route spreads its activity and that generated by its associated companies on a daily basis. Currently, we have profiles on Facebook, Twitter and Instagram, as well as a web page where our partners can publish their events on the agenda and a blog where we inform them about the activity of the Path and the most important events and achievements of our activities.
Membership in the Spanish Association of Wine Cities (ACEVIN) – Roads of Wine of Spain means a guarantee of tourism excellence, which provides us with a constant showcase in national and international magazines and digital media specialized in tourism. Of course, we also actively participate in all the initiatives promoted by ACEVIN, which are many, being the reference point for wine tourism in our country.
Also through local institutions, such as Turismo de La Rioja, we are present at all events of tourist and wine tourism interest, both inside and outside Spain. The most recent, for example, the last FITUR 2021 fair, in which our culture, our gastronomy and our peoples have had their place. 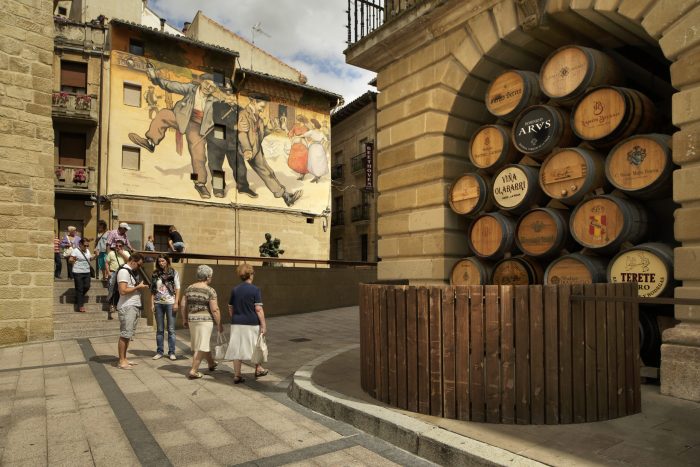 What are the peculiarities of the territory and its wines?
The Rioja Alta Wine Route is located in the wine area par excellence of La Rioja. It is in it that the wine culture of the region has basically developed and from which some of the most prestigious wines of La Rioja come. But, in addition, two other elements complete an unrepeatable scenario. On the one hand, the richness and diversity of the Historic-Artistic Heritage, a reflection of the “crossroads” and borderland that was La Rioja.
It should also be noted that the Camino de Santiago passes through several towns located on the Rioja Alta Wine Route, such as Logroño, Navarrete, Fuenmayor and Nájera. Like the Ignatian Way, with all the spiritual and cultural imprints that both leave on our land.
On the other hand, it is an environment and a landscape characterized by the vineyard but overlooking the mountains of Toloño, Cantabria and La Demanda, without forgetting the Ebro river, and all this with the hospitality of the Rioja villages and their people.
As for its wines, in very general terms it can be said that they are elegant, balanced and very suitable for aging. For many, talking about Rioja Alta means remembering some of the best wines of a land recognized all over the world for its enological qualities. 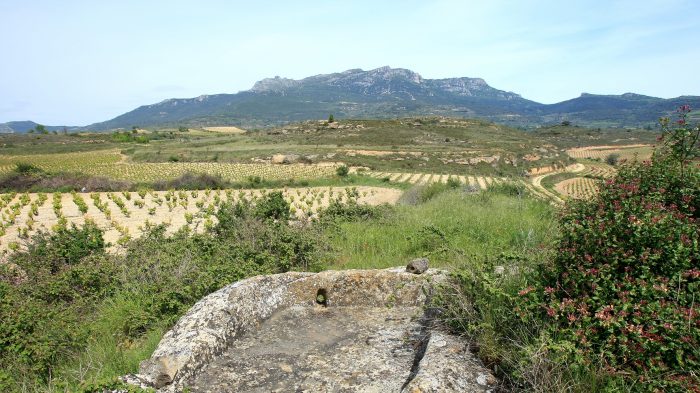 Can you briefly describe the route and the territories of cultural and enotourist interest it crosses?
There are numerous and extensive traces of the wine-growing activity on the heritage of the area. Throughout the territory there are numerous examples of Riojane family cellars grouped in the so-called “Barrios de Bodegas’. These are cellars dug deep into the ground or into rock to obtain ideal conditions of temperature, between 13 and 15º, and humidity to the wines. The ventilation pipes of the cellar give the landscape a very characteristic profile.
One of the most emblematic wine districts of La Rioja is San Asensio, also known as Barrio de las Cuevas. It has 300 cellars located on a hill called Cerrillo Verballe, being a unique complex in the region as they form a sort of country where the drafts carved into the rock intersect, giving rise to passages between the cellars that lead us to others. weather. 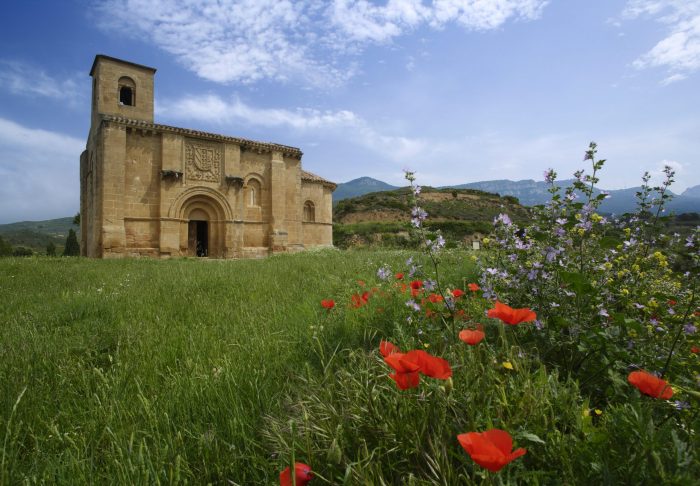 We also find examples of wine districts of great tourist attraction in Cenicero, Casalarreina, Briones, San Vicente de la Sonsierra, Ábalos, Tirgo and Cuzcurrita de Río Tirón.
In addition to these underground cellars, we have almost a hundred cave presses dug into the rock where the grapes were pressed; and guardaviñas, which are one-story buildings located near crops, which since the 19th century were used to watch over the vineyards and as a refuge for farmers.
Finally, we cannot fail to point out the relationship between the cellars and castles in the area. Thus, both Cuzcurrita and Sajazarra keep their old cellars inside along with new buildings where wine is produced with modern methods.
But if there is an emblematic neighborhood in the area, this is the Barrio de las Bodegas or Barrio de la Estación, in Haro, which has the largest concentration of centenary wineries in the world.
The history of this district begins in the 19th century, a century in which many French winemakers decided to move to Haro, fleeing vine diseases such as downy mildew and phylloxera, which were devastating the vineyards to settle first in the Cuevas area. , in this district, due to the proximity of the railway stations, which allowed them to maintain trade with the rest of the northern areas of the country. 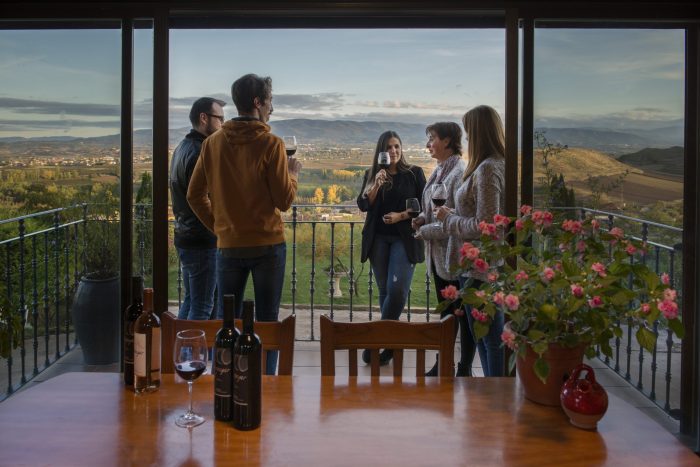 Knowing the secrets of winemaking while tasting a good Rioja wine is undoubtedly one of the best pleasures that La Rioja Alta offers us.
The Rioja Alta Wine Route and its partners offer a wide range of experiences for all audiences: families, couples, friends, companies and incentives.
Here, everyone is welcome and thanks to the friendly and welcoming character of the people of Rioja, all visitors will feel at home. It is not a cliché, it is a reality that our tourists live and feel. The history, richness and diversity of the heritage of our territory guarantee entertainment and culture. Our wine culture encompasses everything from wineries, old cellars, centenary cellars and winemakers to the most innovative recently created projects. And all, very close to you.