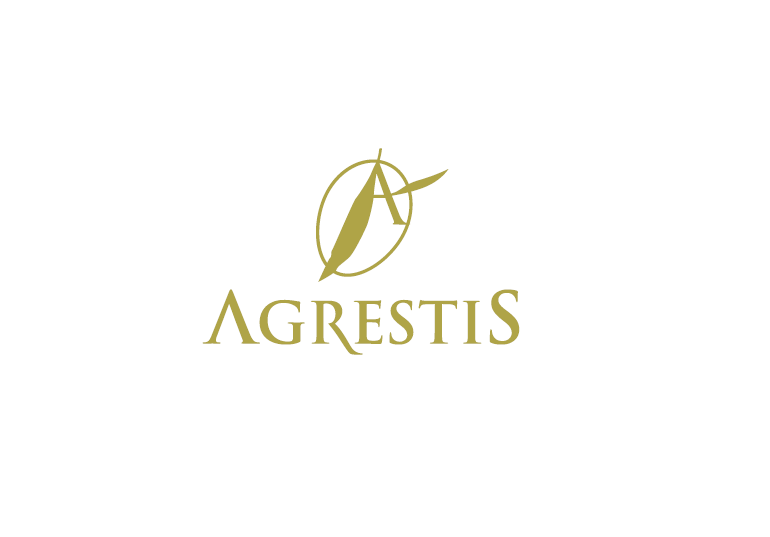 And there
In
The dry
Olive groves
Where
So alone
The sky, blue with cicadas
And the hard earth
Exist,
There
The prodigy
The perfect
Capsules
Of the olives
Filling
With their constellations, the foliage:
Then later,
The bowls,
The miracle,
The olive oil.

Always a symbol par excellence of Sicilian culture, the olive tree is one of the keys on which the island’s economy is based. Among the varieties of olive trees grown on the largest island in the Mediterranean, the oldest and most well-known are: Biancolilla, Cerasuola, Moresca, Nocellara del Belice, Nocellara Etnea, Ogliarola Messinese, Santagatese, Tonda Iblea. To these are added other less known varieties, such as: Brandofino, Crastu, Giarraffa, Minuta, Pidicuddara, Verdello, Zaituna.

Introduced to Sicily by the Phoenicians, according to historical evidence, the olive tree was then considered a precious plant also by the various populations, who settled over the centuries. 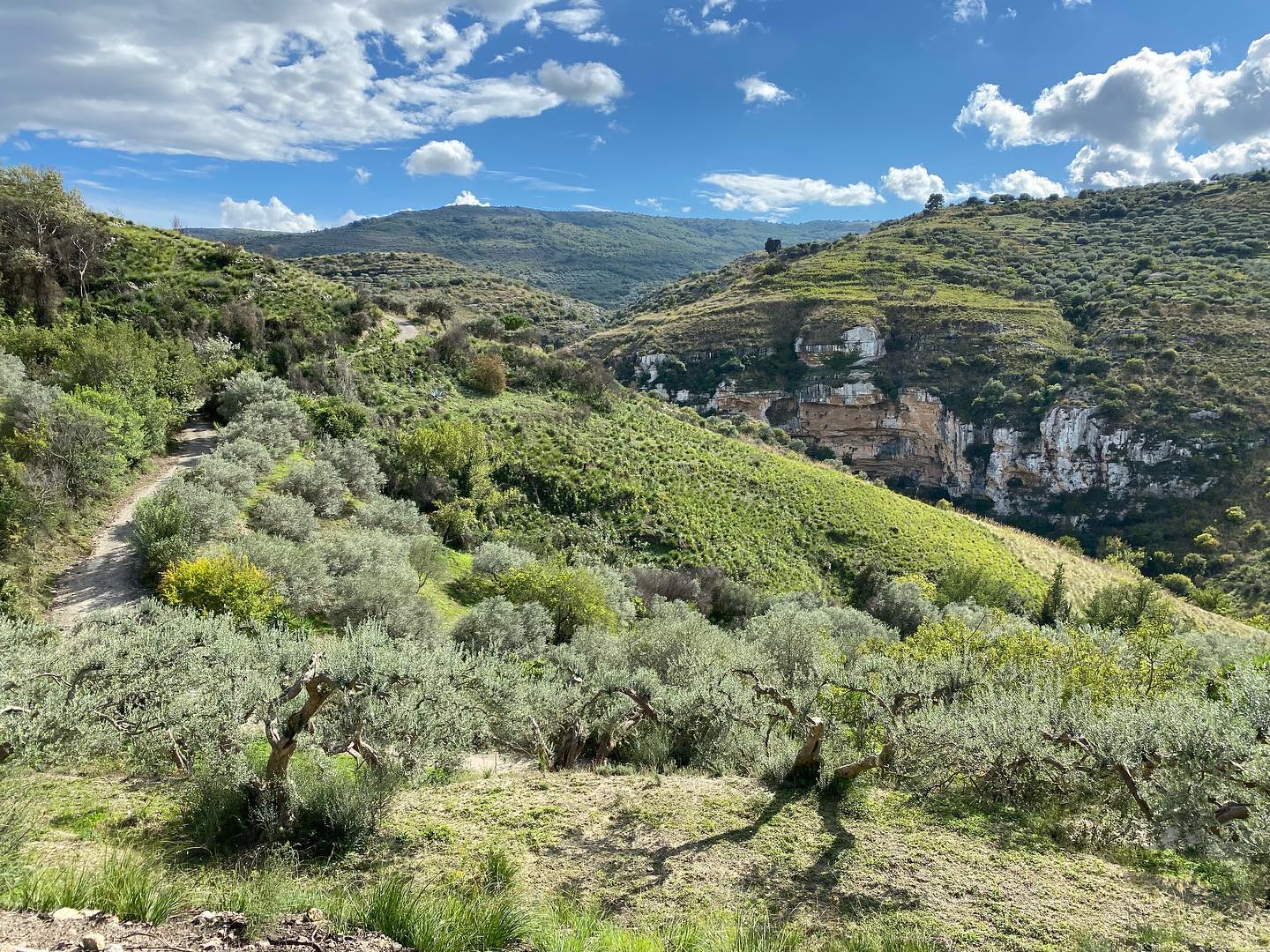 Each corner of the island has a high level of olive production. The strength of the Sicilian olive sector lies in the fact that the majority of companies are family-run, so the attention paid to cultivation and production is naturally higher than in industrial realities. 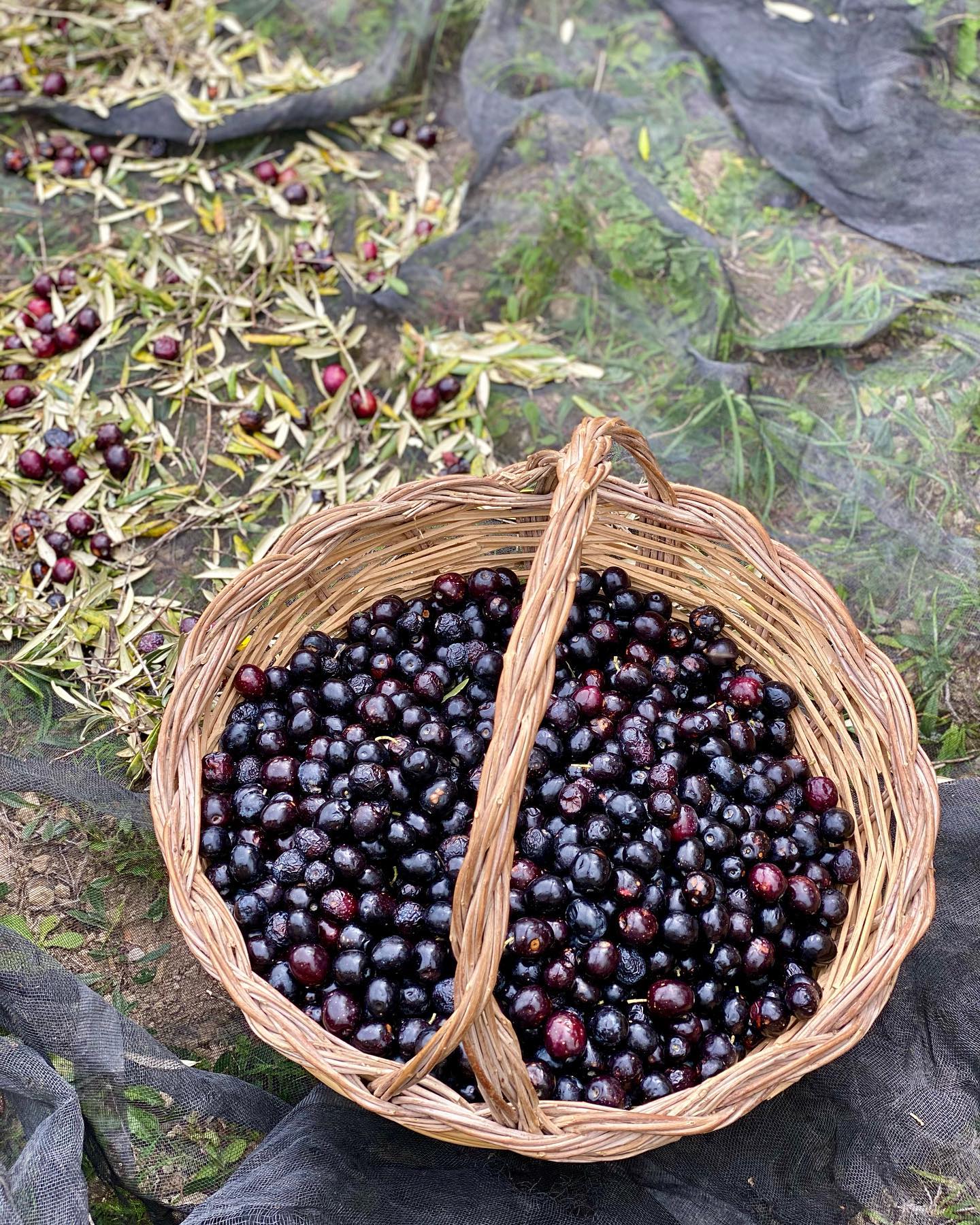 Agrestis is a farm that has made its philosophy of family management. From father to son, generations follow one another with the same values and the desire to emerge beyond the island’s borders. An award-winning company with an excellent production of Extra virgin olive oil, Agrestis is the example of a Sicily skilled in creating healthy and quality products for those who love tradition and gastronomic culture. 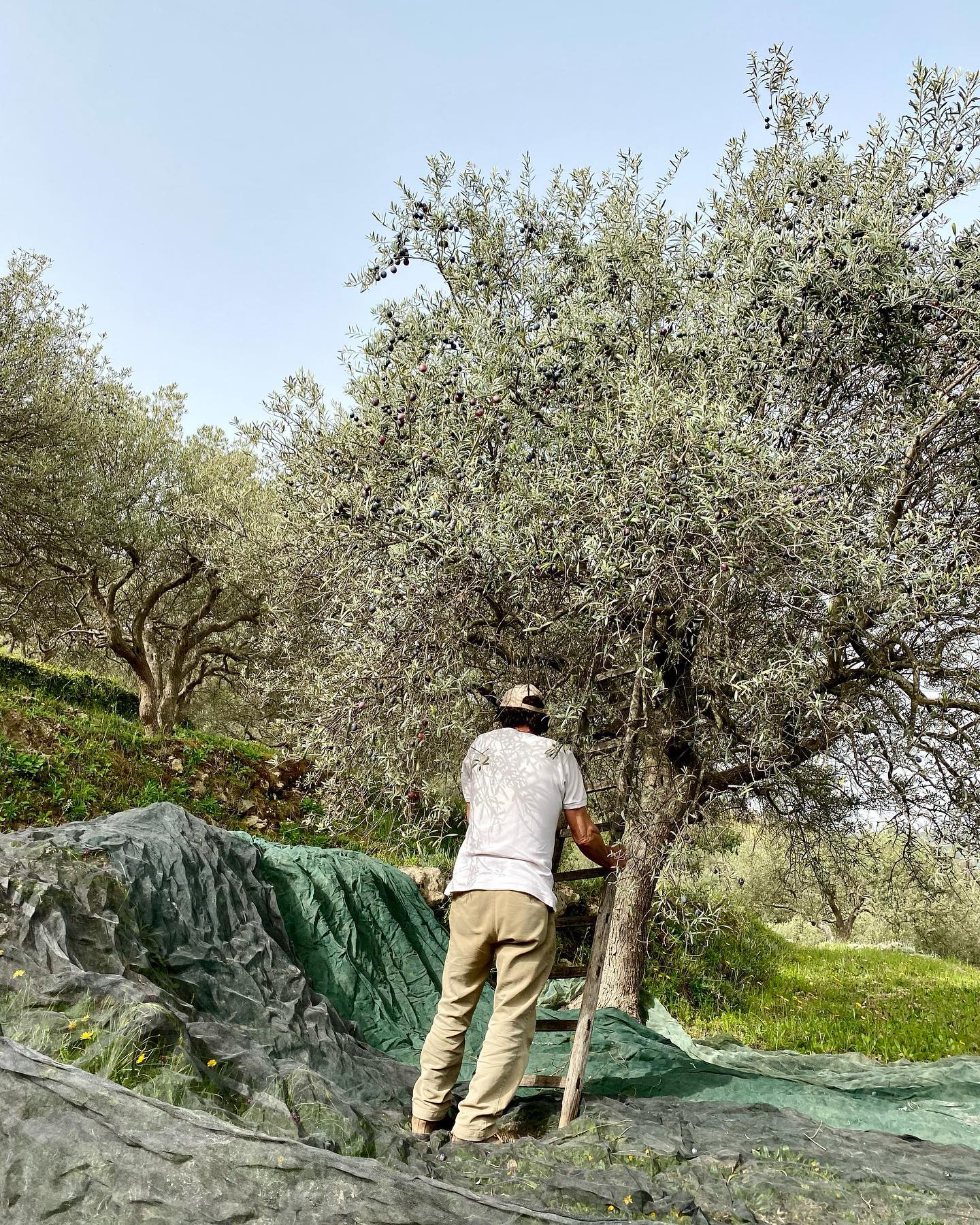 The company is located in Buccheri, whose history is closely linked to a generous territory, with highly picturesque landscapes and unspoiled nature.

The charming village, in the province of Syracuse, is located at about 820 m above sea level, on the slopes of Monte Lauro. Inserted in the circuit of the most beautiful villages in Italy, its strategic position, between the provinces of Syracuse, Ragusa and Catania, has allowed Buccheri to develop over time as an important road and commercial hub. Sicilians, Greeks, Romans and Byzantines were the first peoples to settle but it is with the arrival of the Arabs that the town is fortified with a wall and it is still with the Normans that the city is defined with the construction of a castle (of which still remains), around which the town will develop. Buccheri is also famous for its still numerous and visible neviere (a sort of “ice-house”) on the plateau of Mount Lauro, which overlooks the town. The neviere constituted an important trade with the other cities of Sicily but also with Malta. The snow was sold to hospitals but also to make slushies and ice creams. Today, Buccheri is known for its tourism, for its Medieval Festival (MedFest) and for an interesting olive production. 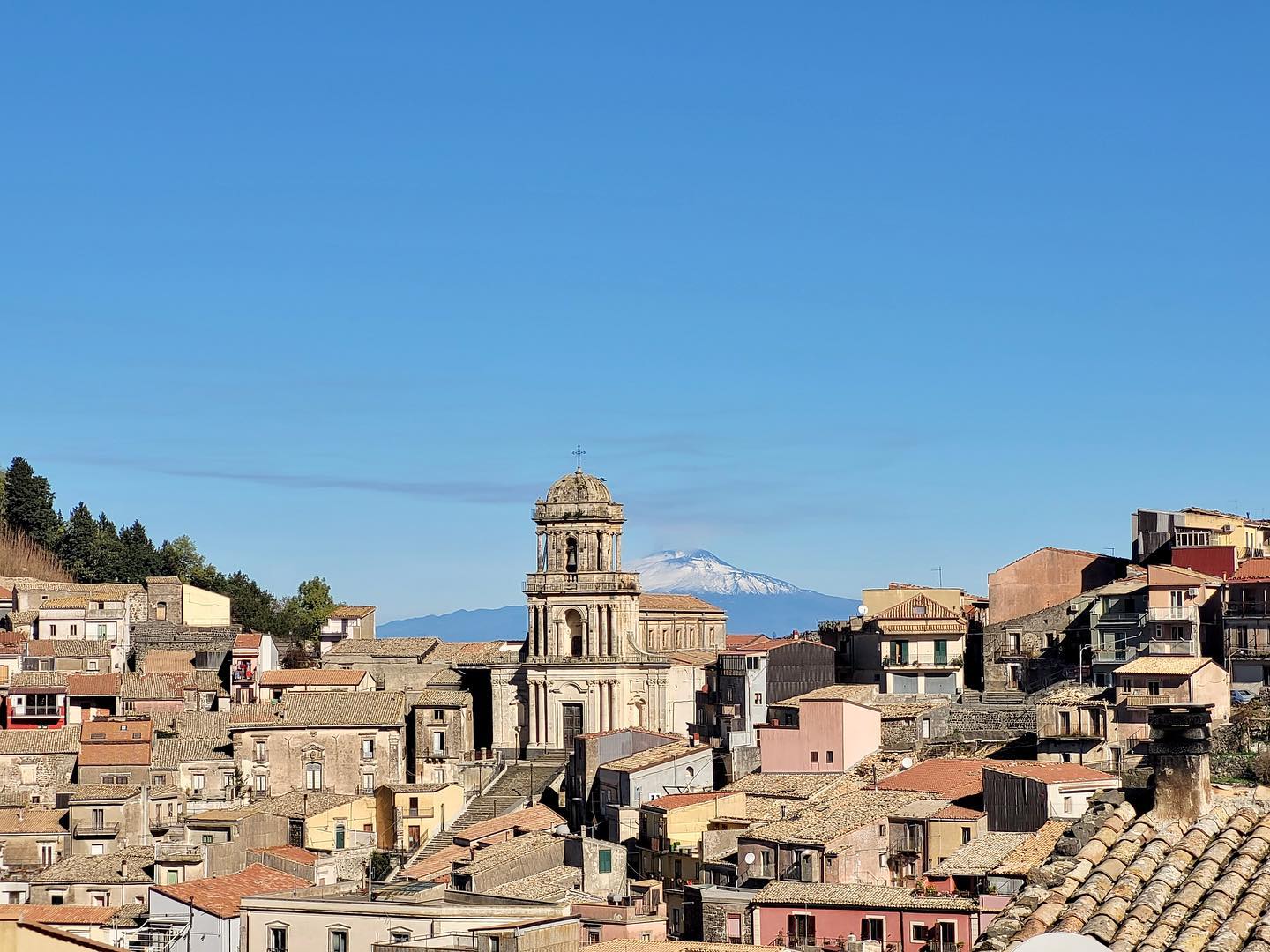 Agrestis is located at 820 meters of altitude, in an area characterized by arid hills, and suggestive forests.

The Company was founded in 2003 by Giuseppe Paparone and Lorenzo Nicotra, to protect the numerous centuries-old olive trees that grew in the nearby abandoned countryside. The domestic production of Extra virgin olive oil thus became a real activity. Over time, the sons, Pietro and Salvatore, joined the project, with the acquisition of about 8 hectares of olive groves, part of which converted to organic.

Today, there are 20,000 olive trees and make Agrestis one of the leading companies in the island’s olive production.

The company, always in step with the times, receives important awards both nationally and internationally that reward the quality of the Extra virgin olive oil produced from the prestigious Tonda iblea olive. 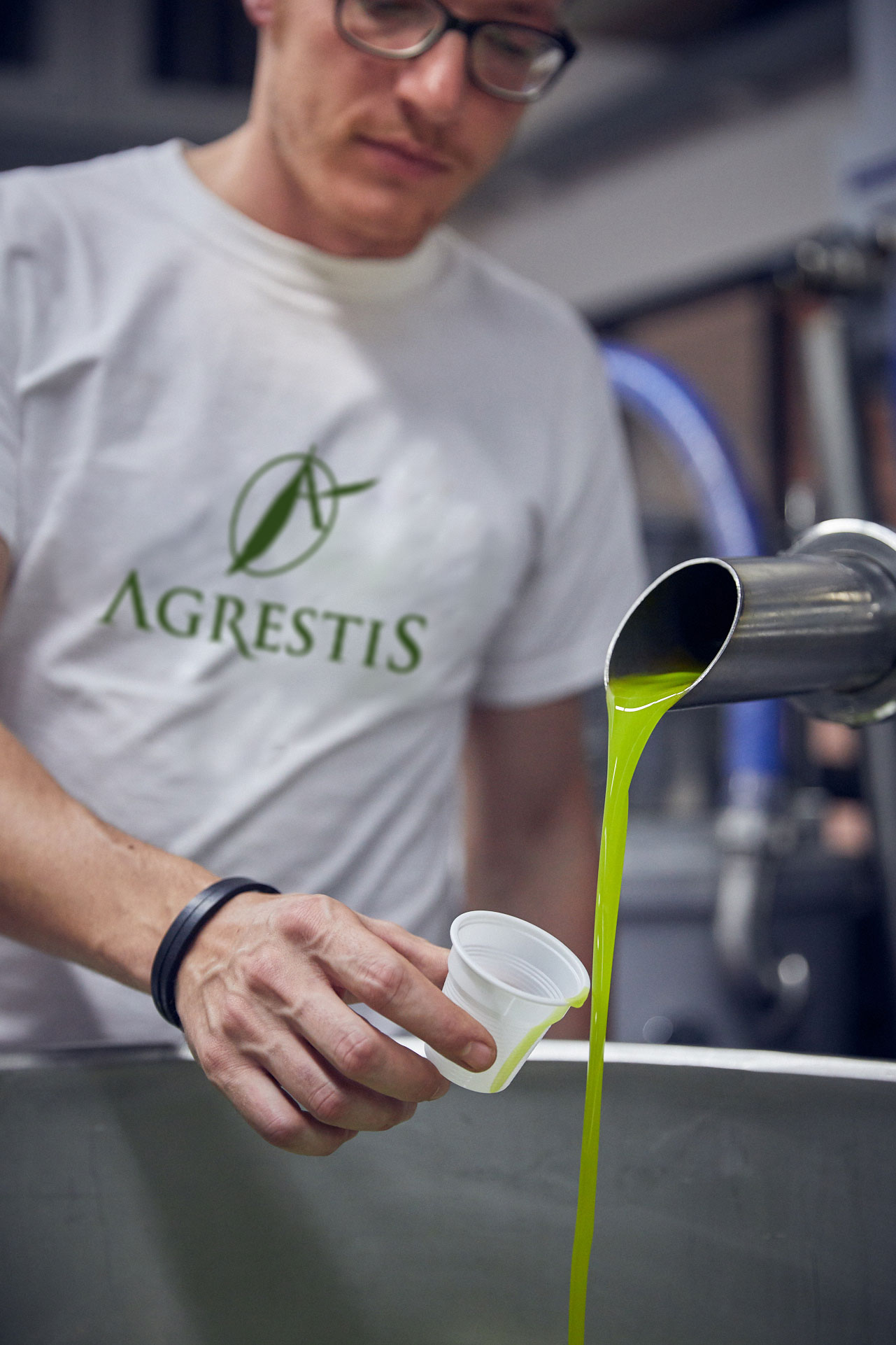 The rich olive production of Agrestis differs in terms of product types, born from different cultivars that express the personality of the territory.

Until about ten years ago, the harvest was late, in December and January, because, in that period, the olive was ripe and guaranteed a high percentage of oil inside.

Today, more knowledge indicates that the acidity of the oil also increases with the maturation of the olive and the polyphenols, precious antioxidants for the body, decrease drastically. This means more quantity but less product quality. For this, Agrestis, faithful to his philosophy, aimed at favoring quality, opted for early harvest.

Agrestis collects the olives manually, with traditional techniques from 1st October to the end of November. In order to best preserve all the properties of the olives and ensure the highest quality of the product, the olives are pressed on the same day as the harvest.

The crusher is characterized by an innovative cold pressing mechanism with a continuous two-phase cycle. The system is made up of a set of continuously connected machinery which allows for uninterrupted processing to avoid oxidation. The two-phase technology does not involve the use of water and the centrifuge separates the oil from the wet pasta. Another advantage of this system is that it operates at low temperatures (<27 °), thus preserving the most valuable aromatic parts, perfumes and polyphenols in the best possible way. 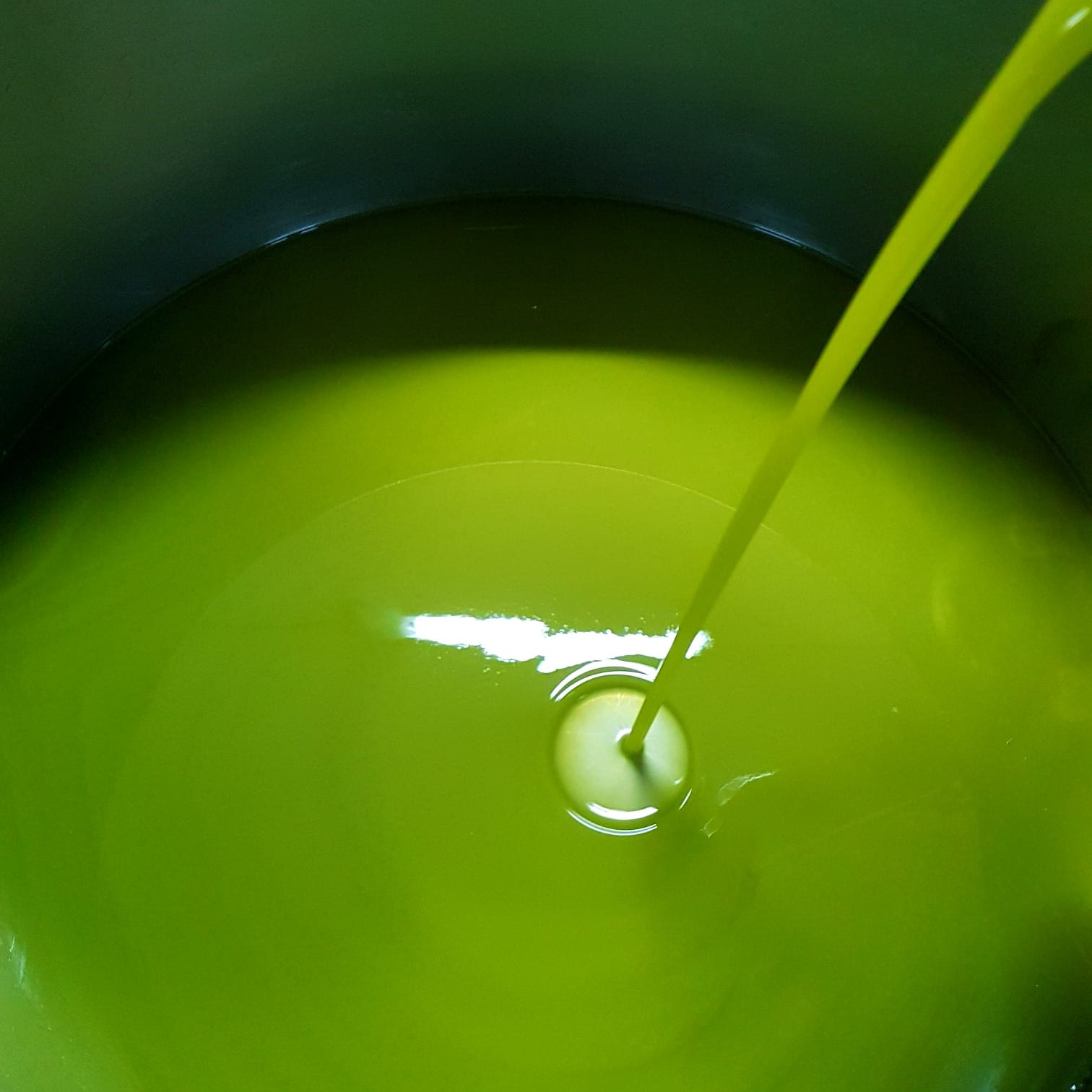 Bottling takes place on site by means of a filling machine that creates a depression in the bottle and the oil flows without passing from pumps to impellers, avoiding contact with the outside air. The bottle and cans are then capped, sealed, and labeled with the company labeller. 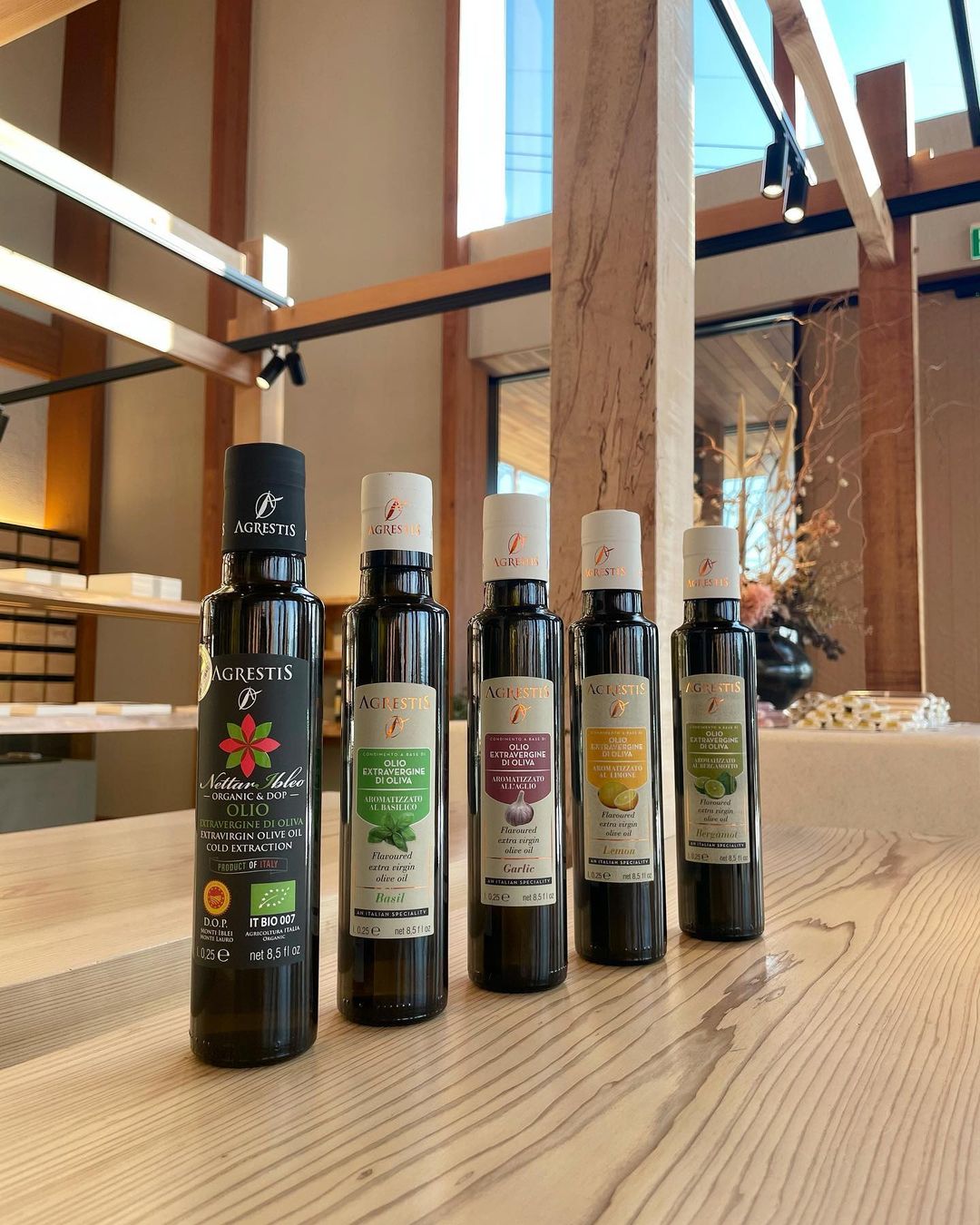 The centuries-old olive groves are located at an average altitude of 600/700 meters. above sea level, in a predominantly calcareous and very permeable soil. Harvesting (hand stripping) takes place in October. The oil belongs to the category of intense fruity, green color, with golden reflections. The nose reveals an exceptional combination of green apple, tomato, freshly mown grass and fresh hints of wild herbs. On the palate it shows harmonious bitter and spicy hints with notes of artichoke and tomato. 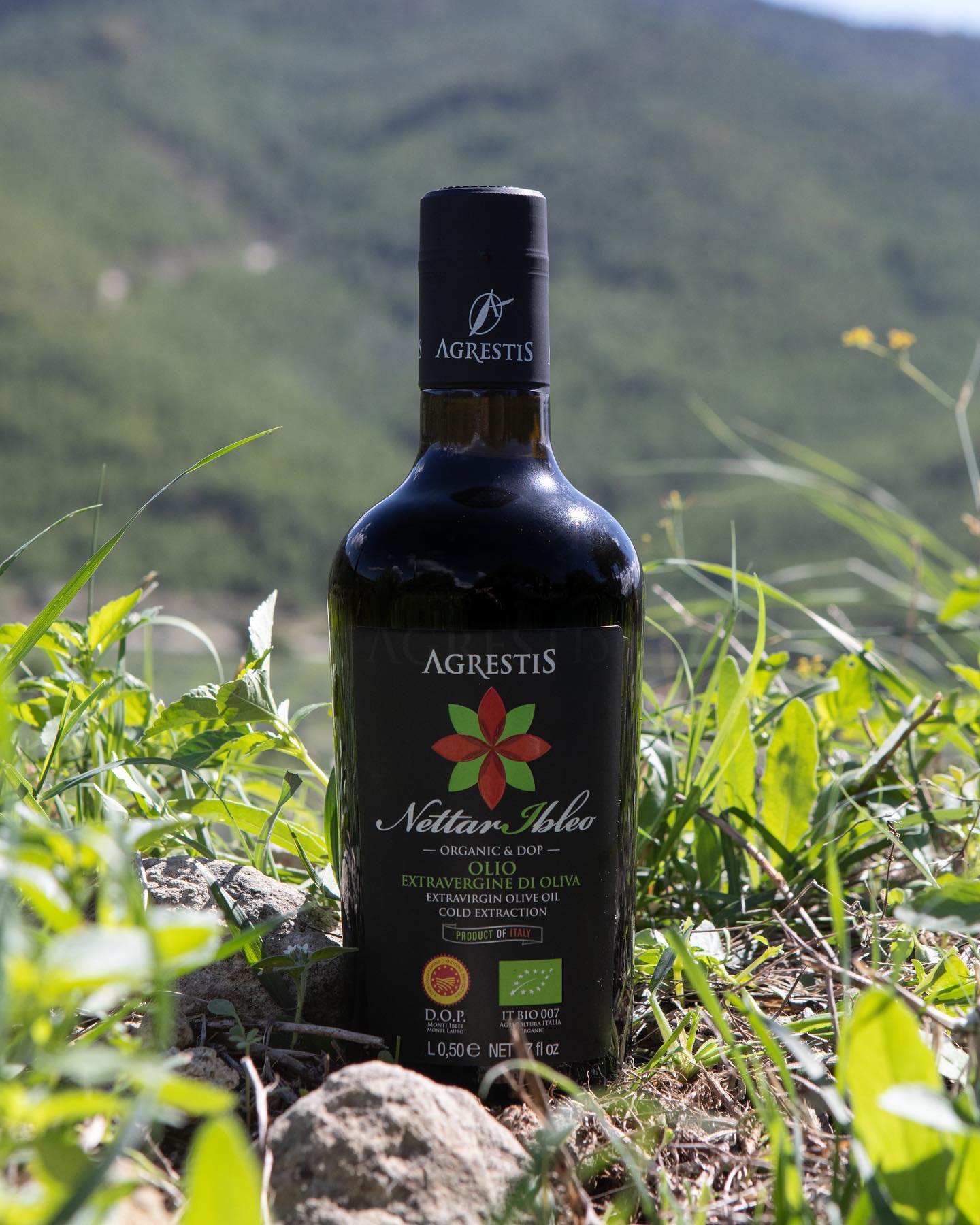 The nose is decisive with fruity hints of medium ripe tomato, artichoke, basil and aromatic herbs. Balanced in taste sensations, with strong bitter and spicy notes. 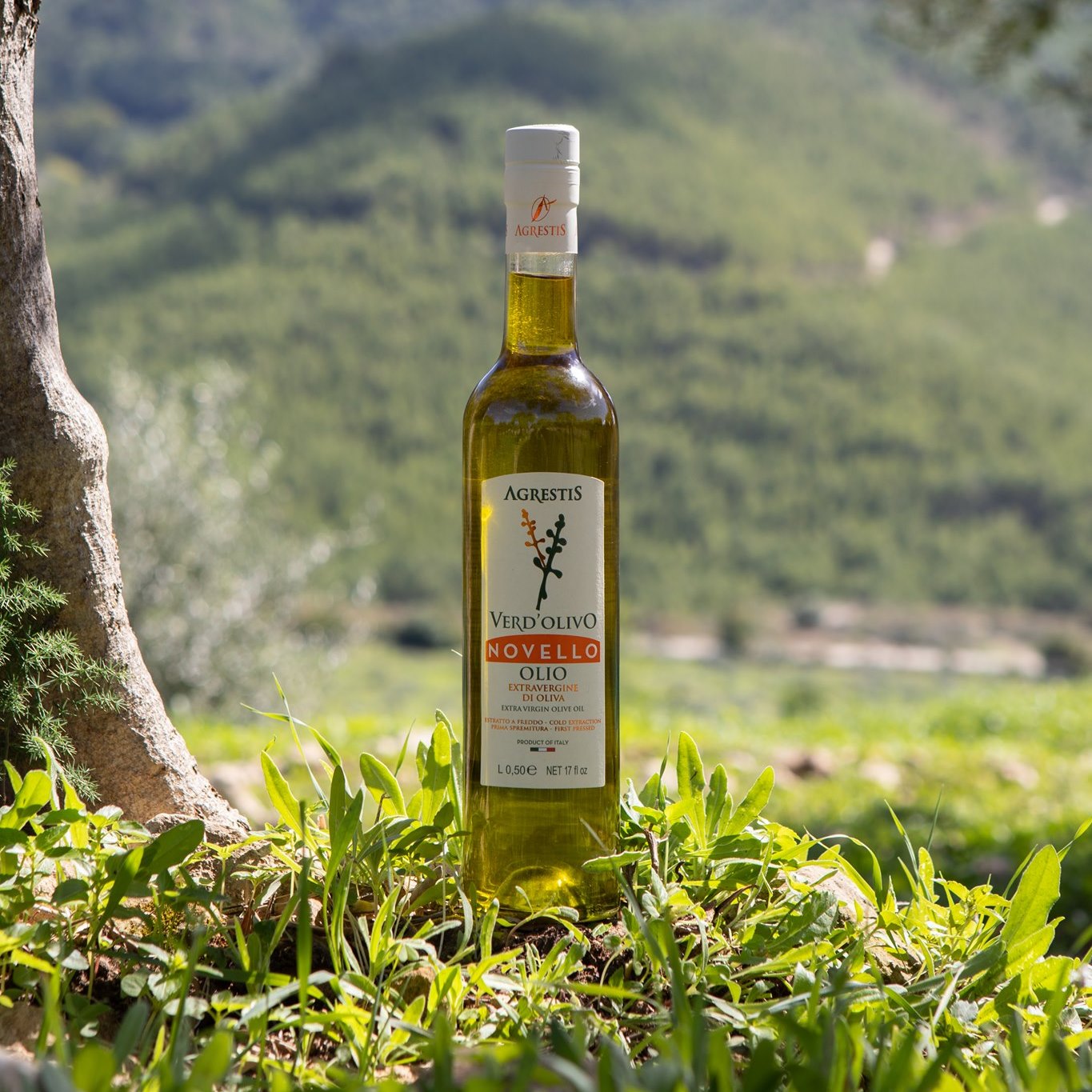 IGP Sicilia is a medium fruity oil with Protected Geographical Indication certification produced from the selection of the best Sicilian cultivars. The environmental and cultivation conditions of the olive groves intended for the production of the PGI are the traditional ones, natural to obtain a production of Extra virgin olive oil with the chemical-physical and organoleptic characteristics peculiar to the area.

Produced with the best cultivars of the Sicilian territory, from centuries-old olive groves located at an altitude of about 600/700 meters. above sea level. Organic fertilization, the harvest period is from 1 to 30 October. On the nose there is an exceptional combination of tomato and wild herbs. On the palate it shows notes of artichoke and tomato. Spicy and bitter are balanced. 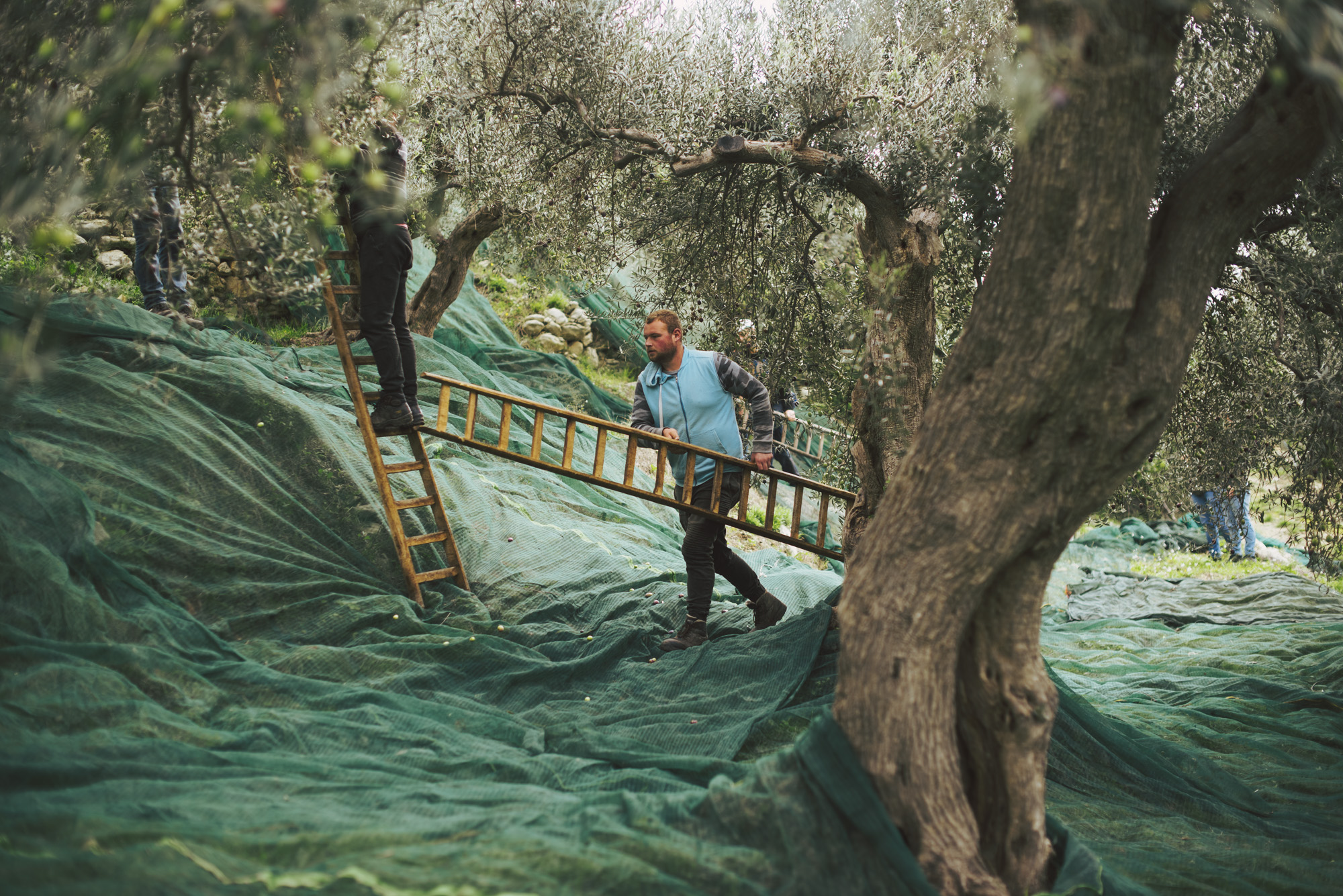 The location of the centuries-old olive groves (Monti Iblei – sub-area Monte Lauro) is at an average altitude of 600/700 meters. above sea level, in predominantly calcareous and very permeable soil. Organic fertilization, hand-picked, harvesting takes place from the 1st of October to the 10th of November. Cold extraction method.

On the nose, fruity hints of green tomato, apple and ample balsamic notes of mint, basil and celery. On the palate a balance of bitter and spicy and vegetable flavors such as lettuce, fresh broad beans and asparagus. 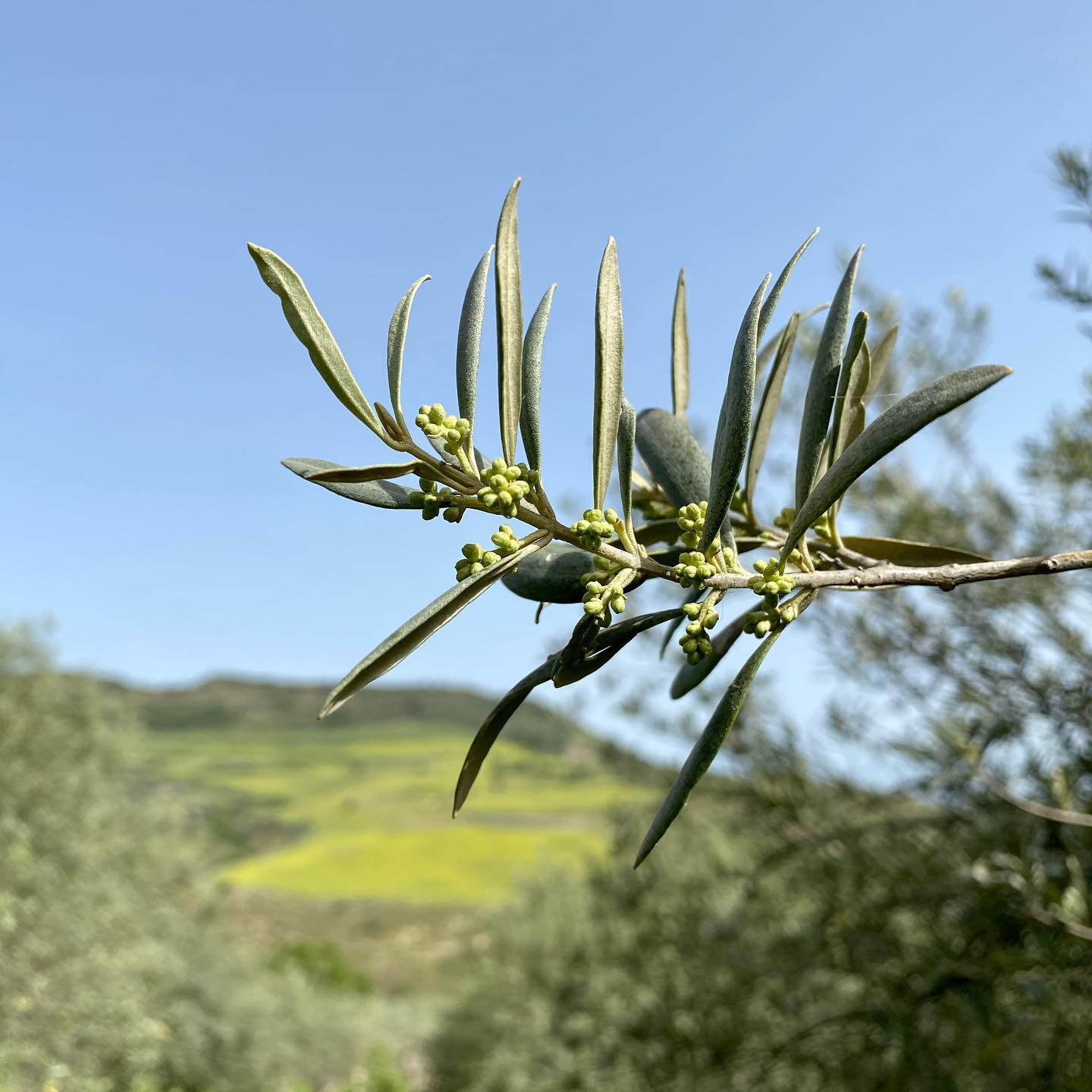 The “Agrestis Bell’Omio” Organic Extra Virgin Olive Oil is produced exclusively from Buccheri’s “Tonda Iblea” which makes it a unique and prestigious product. The olive harvest period (from centuries-old olive groves located at an average altitude of 600/700 meters above sea level) runs from 15 October to 15 November.

Medium fruity, intense green color with golden reflections. The nose smells of green tomato, freshly cut grass and light notes of basil, apple and artichoke. It has an intense but very clean and balanced flavor, leaving a pleasant fresh vegetable aftertaste in the mouth. 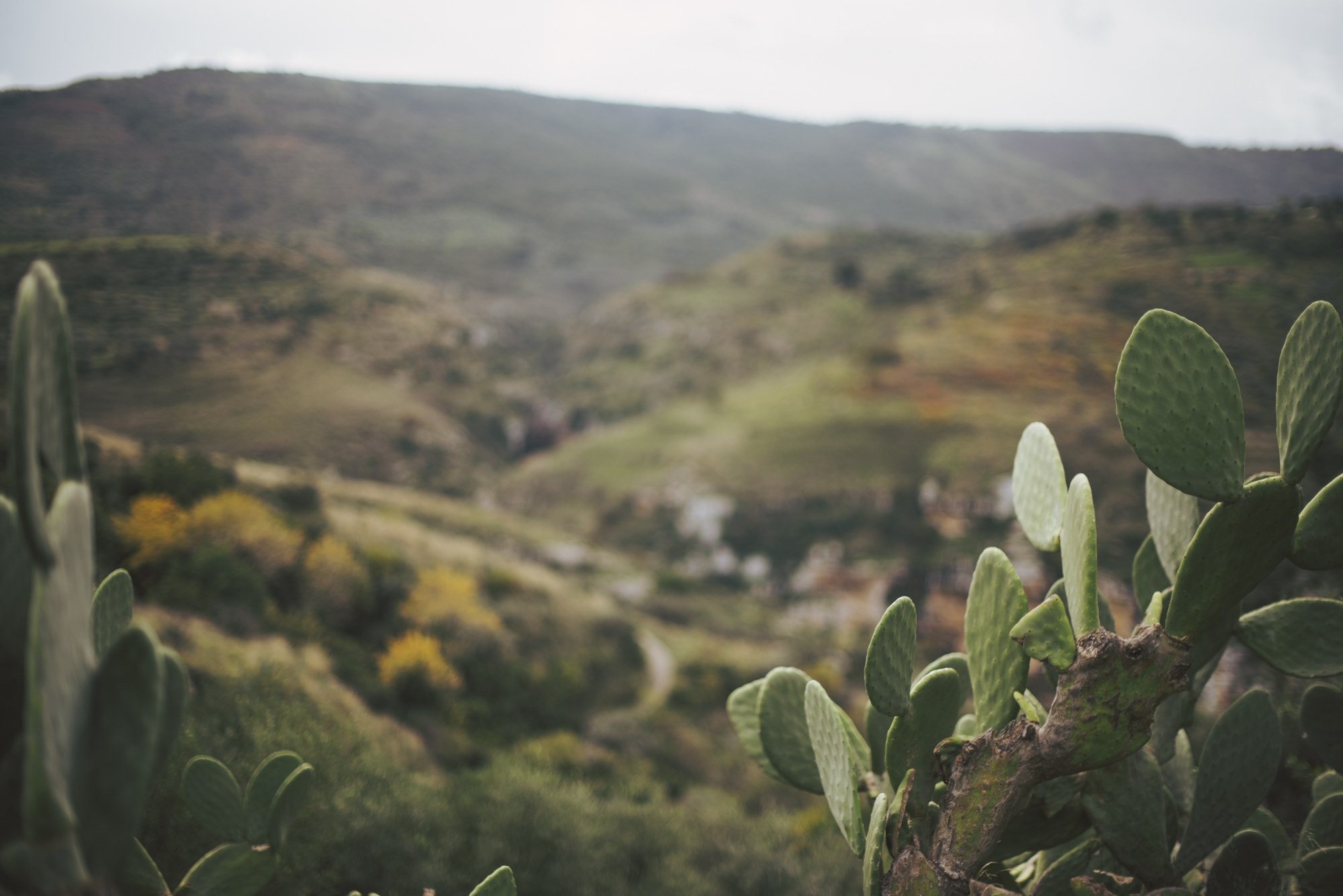