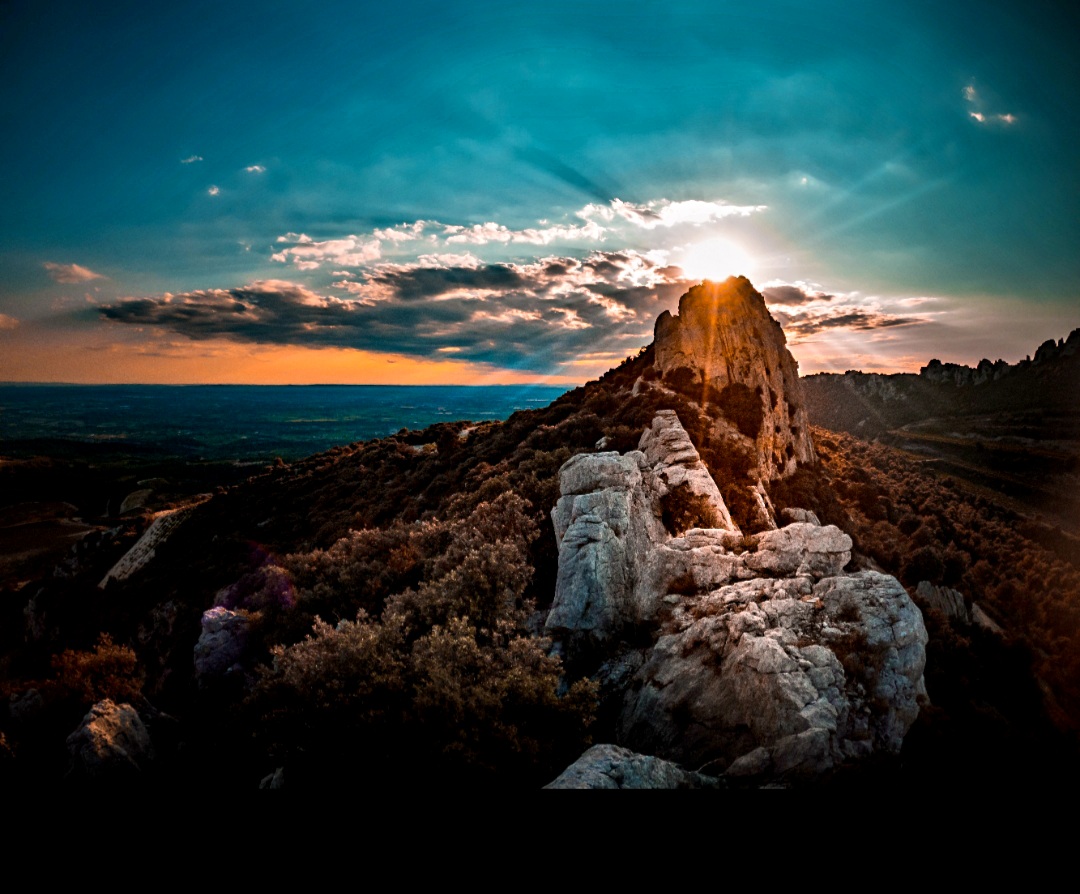 Written by Veronica Lavenia
The AOC Muscat de Beaumes de Venise was born in 1945 and is a wine appellation of the Rhone Valley. This appellation mainly produces red wines but also rosé and white wines.
Obtained exclusively from the Muscat à petits grains (black and white) grape, it is grown in the municipalities of Beaumes de Venise and Aubignan. Each year, on average, between 6,000 and 11,000 hl are produced on an area not exceeding 450 hectares. The geological peculiarities, typical of the Rhone Valley region is due to its diversity: three types of rock make up the terroir. The soil is sandy-clayey-calcareous, thanks to the soils of the Triassic, the White Earths of the Cretaceous and the Gray Lands of the Jurassic.
The vineyard covers 660 hectares for the red and 400 hectares for the white.
“Beaumes” means “caves. The local caves give the wine its name. Venice refers to the region’s papal past.

Let’s find out more about the area in this interview. 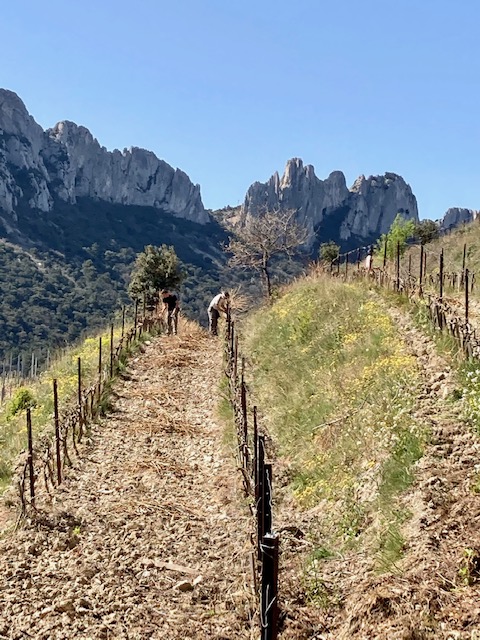 Since the birth of the AOC Beaumes de Venise, what objectives have been achieved and which remain to be achieved?
Broad demand. We prefer to question ourselves very regularly rather than dwell on what has been done. We think of future generations to try to pass on this centuries-old heritage to them by adapting it to the various climatic, economic and social constraints, preserving our landscapes and our lands which are the pillars of our identity. With the hope that our Beaumes de Venise wines can still be appreciated in the distant future. 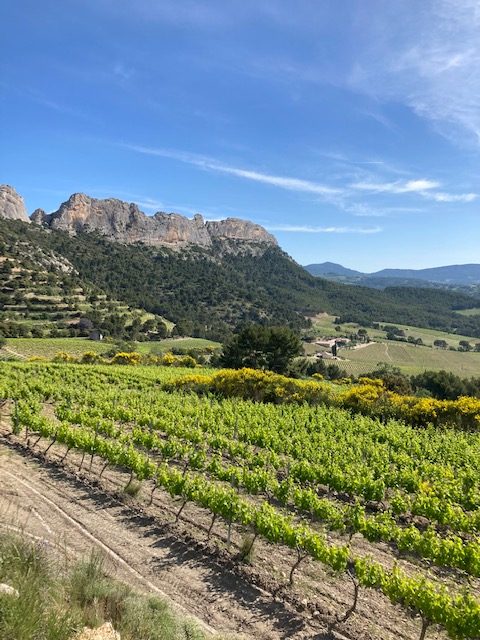 What are the particularities of the territory and its wines?
Since 1945, only wines from the “muscat à petits grains” grape black and white, harvested by hand in an area delimited by the municipalities of Beaumes de Venise and Aubignan, are entitled to the AOC Muscat de Beaumes de Venise.

Saffron, a soft Miocene rock (15 million years old), is the favorite terroir of Muscatos to which everyone gives its finesse. Compliance with strict production conditions (pruning method, yield, natural sugar richness, etc.) guarantees Muscat its exceptional qualities.
Vin Doux Naturel, Muscat by Beaumes de Venise begins its life like any other wine, but we stop the fermentation and transformation of sugars into alcohol, adding about 10% pure alcohol (mutage). This helps to preserve some of the sweetness contained in the berries. The white Muscat de Beaumes de Venise offers a palette of colors ranging from pale yellow to golden.
Very fragrant, the flowers, citrus and exotic fruits let their aromas explode. Rare and precious, Moscati rosé and reds complete the range.
The Beaumes de Venise vineyards became part of the AOC Côtes du Rhône in 1956. The incessant work of the Balmean winemakers allowed them to access the AOC Côtes du Rhône villages in 1978 and then obtain the consecration to Côtes du Rhône Cru in 2005.
Beaumesde Venise red wines are produced in the municipalities of Beaumes de Venise, Lafare, La-Roque-Alric and Suzette. They are villages perched high up, typically Provencal, with their cobbled and sloping streets, their stone houses built around small squares on which there is often a throne fountain to refresh the atmosphere and the many hikers and cyclists who discover and travel through these breathtaking landscapes. 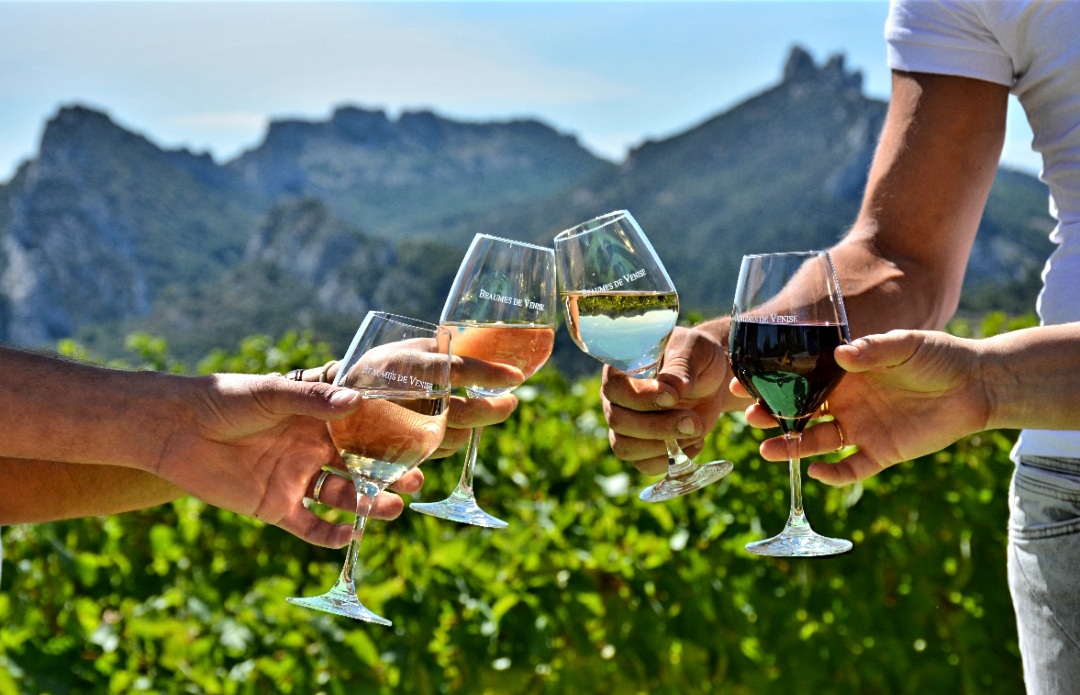 The main grape varieties are grenache noir, syrah, mourvèdre, as well as all the grape varieties authorized in the Rhone Valley. The typicality of the red wines of Beaumes de Venise derives from three well-defined terroirs: Il Trias. This is the name given to the oldest period of the secondary era (220 million years). The soils of the Triasse are found on the surface in the heart of the Dentelles de Montmirail massif, following a compression phenomenon, the oldest geological layers are brought to the surface. This will induce a straightening of the Jurassic limestone plates which will become the Dentelles de Montmirail and which will lead to an original geological configuration unique in the Rhone Valley and called “Diapir de Suzette”. 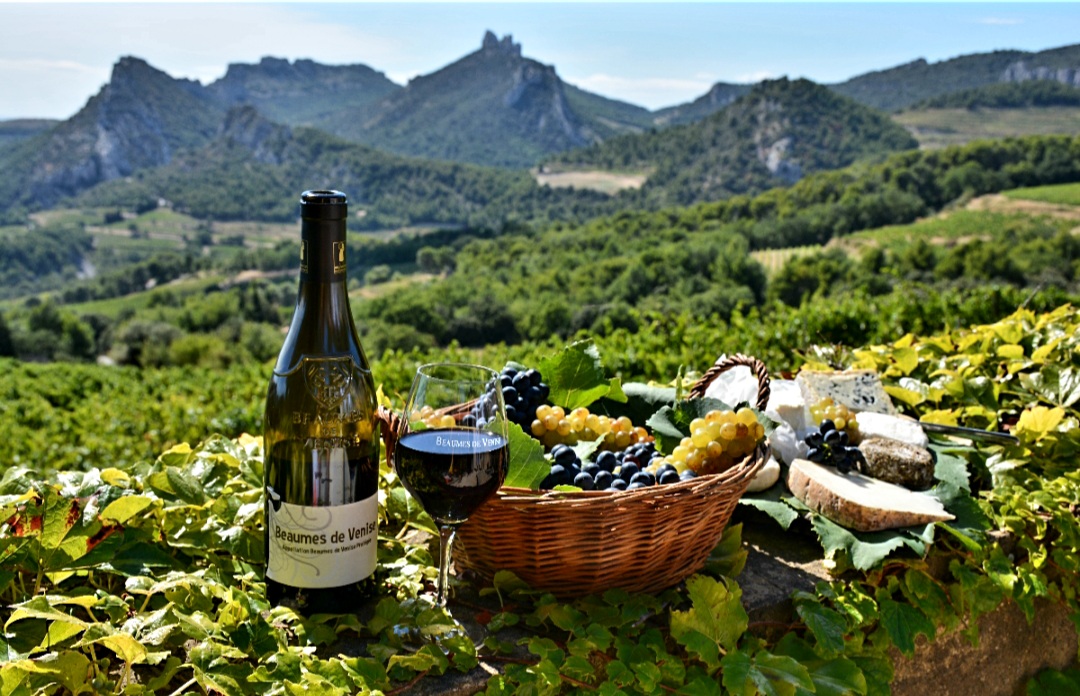 These ocher-colored soils, which reveal the presence of iron, maintain sufficient porosity and allow the vines not to undergo water stress Gray soils: this soil located north of the village of Lafare is mainly made up of Oxford black marl (160 million years) . It is made up of clayey silt and sand Le Terre Bianche: located mainly in the municipality of La Roque Alric, this terroir dates back to the Cretaceous period (90 million years). The soils are marly clayey-calcareous. Here, the vineyard is cultivated in terraces and enjoys maximum sunshine. The red wines of these terroirs are elegant and airy with a nice freshness (also thanks to the altitude of the vineyard). The notes of small red fruits give them a particularly greedy touch. The 150 winegrowers of the appellation, in love with their terroir and their landscapes, have been committed for many years to preserve this generous nature. Here, the yield is moderate, chemical weeding between the rows and the promontory is prohibited and the wooded areas have been preserved. 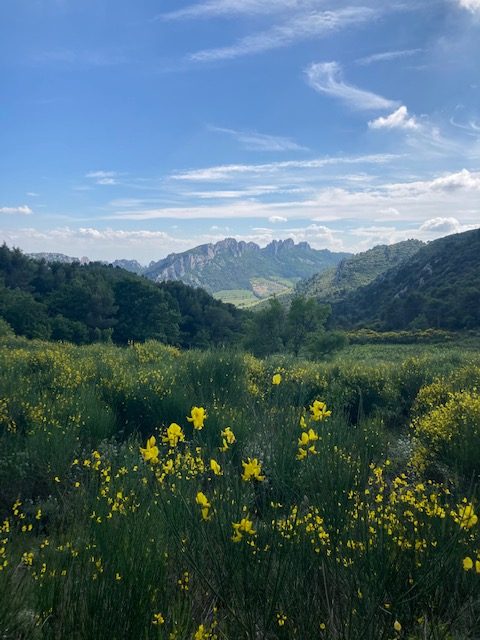 Can you briefly describe the AOC’s areas of cultural and wine tourism interest?
Beaumes de Venise, here is a name that combines mystery and an invitation to travel. Inhabited first by Greek colonists and then by Celtic-Ligurian tribes, the Romans settled there in the 2nd century BC. Since then, its land, favorable to many crops, has allowed the population to thrive in this little corner of paradise where life is very good, protected from the mistral by the majestic Dentelles de Montmirail. The numerous caves, “Baumo” in Provençal dug into the hill have given the town its name. “Venice” is a linguistic evolution of the word “Venaissin”, Beaumes de Venise belonging to the Comtat Venaissin, property of the Popes until the revolution. The latter, great lovers of good wine, also owned muscadières in Beaumes de Venise and offered this delicious drink to their illustrious guests. 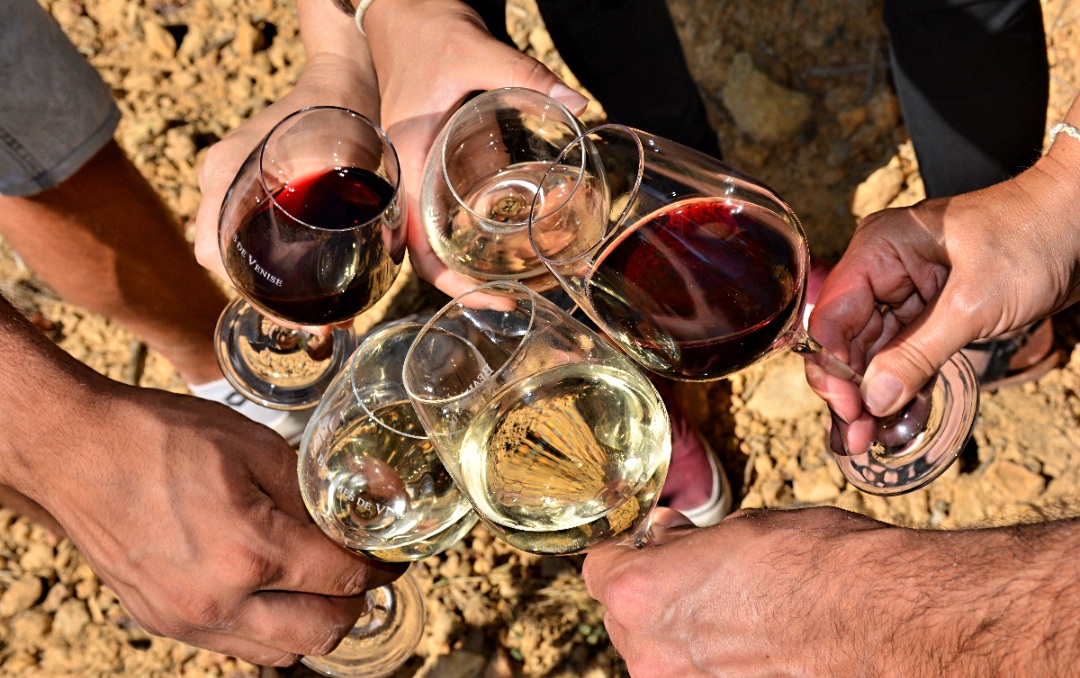 But other visitors are at the origin of the Aubune legend. Notre Dame d’Aubune is a 12th century Romanesque chapel with an incredible view that allows you to imagine the Rhone, the Alpilles, the Luberon and the Monts de Vaucluse. According to legend, this incredible panorama would have pleased Charlemagne, who, on the eve of a battle against the Saracens, stopped at the current location of the chapel at nightfall. He will spend the night praying with his soldiers. At dawn they find the lifeless bodies of the Saracens, thus saving them from fighting. Charlemagne attributes his victory to his prayers and to the Virgin and orders, in situ, the construction of a chapel which bears the name of Aubune in reference to the dawn. This Romanesque chapel will be built in the 12th century and its bell tower is now classified as a historic monument.
You can also stroll in the medieval garden created from scratch in 2015 by the Academy of Beaumes in Venice, inspired by the rules issued in 795 by Charlemagne in his “Capitular De villis”. This garden, which includes medicinal, aromatic and culinary plants, is cared for by a team of volunteers from the association.
For the curious: go down a few steps from the chapel square. They will guide you to the Aubune spring which once supplied the village of Beaumes de Venise and which will soon be used to irrigate the winter garden orchard.
For lovers of romance, we recommend a sunset picnic in the shelter of the majestic and admirable Dentelles de Montmirail while tasting the wines of Beaumes de Venise. 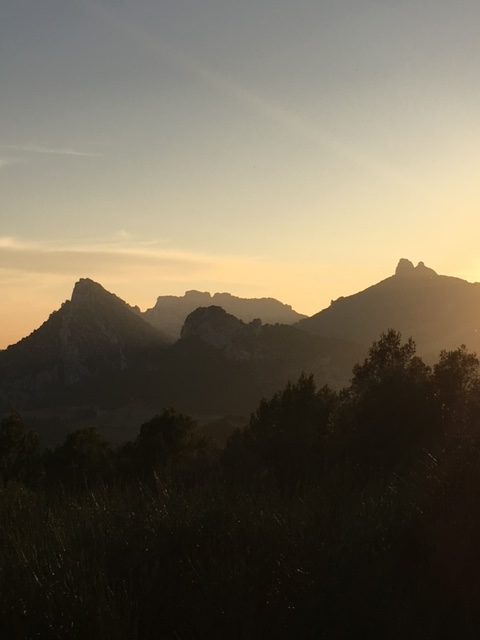 Through which services do you promote the wine region?

The AOC Beaumes de Venise and Vin Doux Naturel Muscat de Beaumes de Venise develop and contribute to the implementation of the product specification, the production area, production, processing and possibly packaging and labeling standards. It appoints a body, approved by INAO, in charge of carrying out the inspection of the specifications and issues an opinion on the control or inspection plan drawn up with the control body. It participates in actions for the defense and protection of the name, the product and the terroir, in actions to promote and enhance the product as well as in the economic knowledge of the sector.
The inter-professional section Beaumes de Venise, under the aegis of two co-presidents, Claude Chabran for production and Xavier Vignon for trade, identify the aspirations of producers and traders, entrust their communication to the press services of Inter Rhône to work on the construction of the image and the growing notoriety of Beaumes de Venise wines.

Why are Beaumes de Venise AOC wines so special?
It is in these typically Mediterranean landscapes that the cultivation of muscat and olive trees appeared in the 5th century BC with the establishment, by the Greeks, of a trading post in Beaumes de Venise.
At the time, the Muscat natural sweet wine of Beaumes de Venise had many followers such as Pliny the Elder up to the Popes of Avignon, owners of their own muscadière to Henry IV and Queen Elizabeth of England.
Not only history but also the characteristics of the monovarietal from Muscat petits grains make this AOC special. It is a monovarietal. It is therefore obtained from a particular winemaking process.
It is a terroir with two faces: a passito wine with moscato and a dry wine with red. A rather flat vineyard for Vin Doux Naturel and an altitude vineyard for the elderly Beaumes de Venise participate in its particular identity. The Beaumes de Venise reds are elegant and airy with a nice freshness (also thanks to the altitude of the vineyard). The notes of small red fruits give them a particularly gourmet touch.