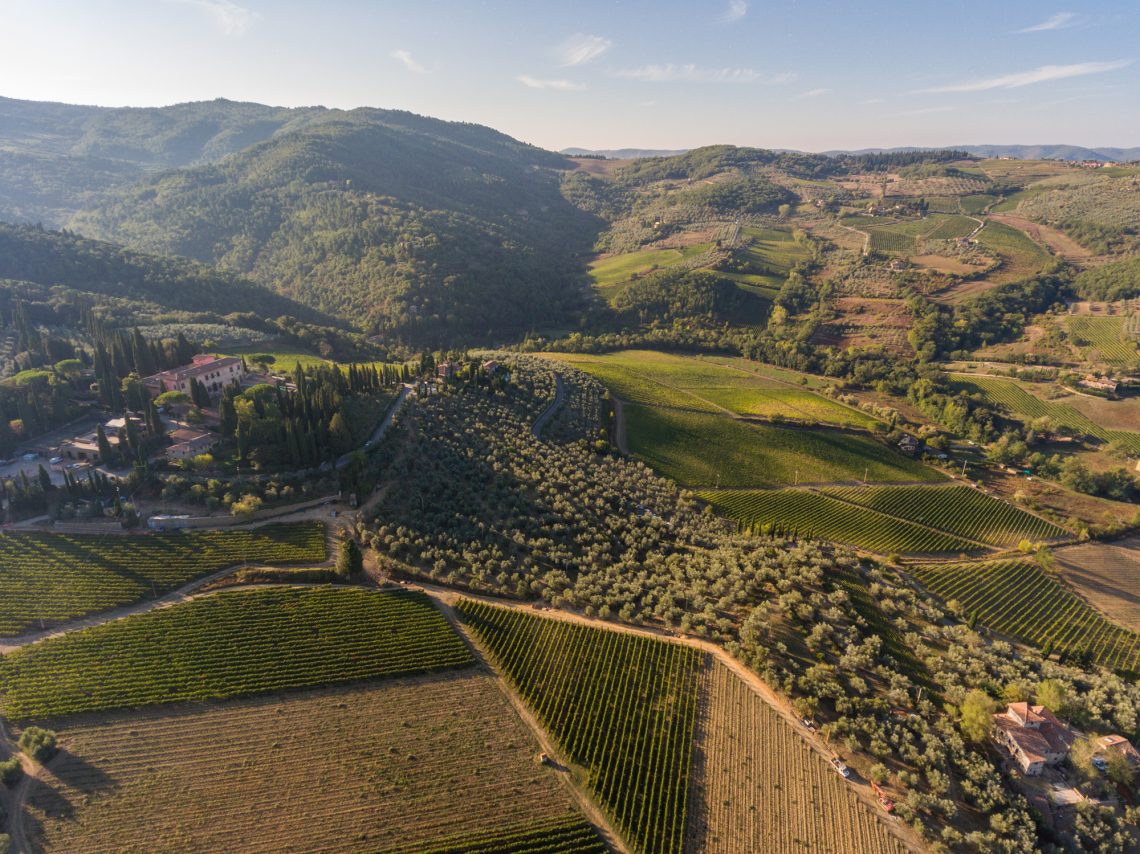 There was a time when Guelphs and Ghibellines fought over Tuscany.

There was a time when some families sought refuge just outside Florence to escape the devastating fights between the two factions. Among these, the Gherardini family who, expelled from Florence in 1280, found their Buen retiro in the castle of Montagliari. The Gherardinis wrote a part of the history of Florence, participating, among other things, actively in the struggle, organizing violent assaults to prevent the transport of food to Florence. It was for this reason that, in 1302, the city of Florence, tired of the continuous sabotage, razed the Gherardini Castle to the ground, and the family was forced to move to the opposite side of the valley, to Vignamaggio. 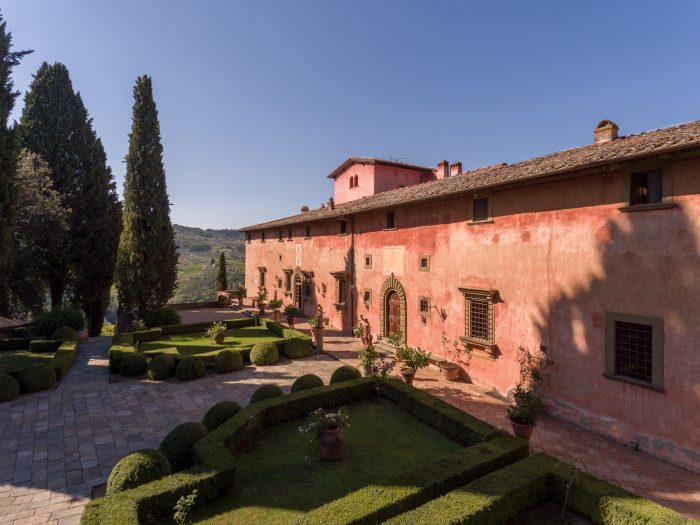 Vignamaggio has an ancient and fascinating history like the family that lived there for centuries. The same family that, in a lush estate, started the cultivation of vineyards and olive groves as evidenced by a document from 1404. That parchment, in fact, symbolically marks the beginning of Vignamaggio wine. 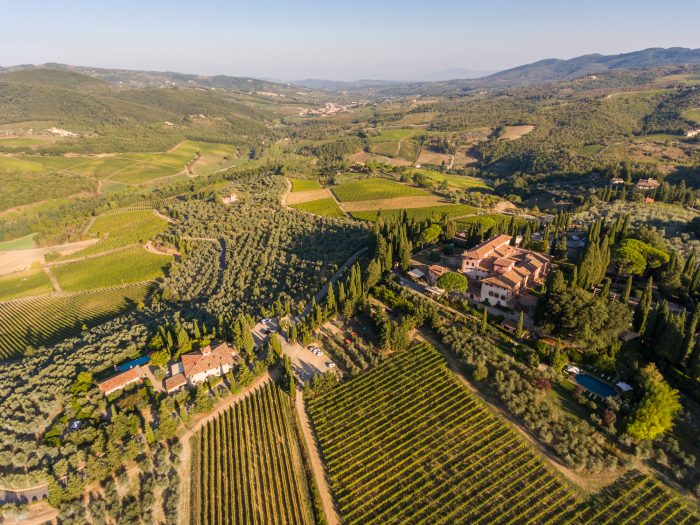 Vignamaggio is also an expanse of olive groves which, in the territory of the famous Chianti Classico, produces quality Extra virgin olive oil.

From past centuries to today Vignamaggio has been a well-established company at an international level. An estate with an organic vocation that has been able to enhance its rich history, also with the help of technologies made available by the contemporary era. 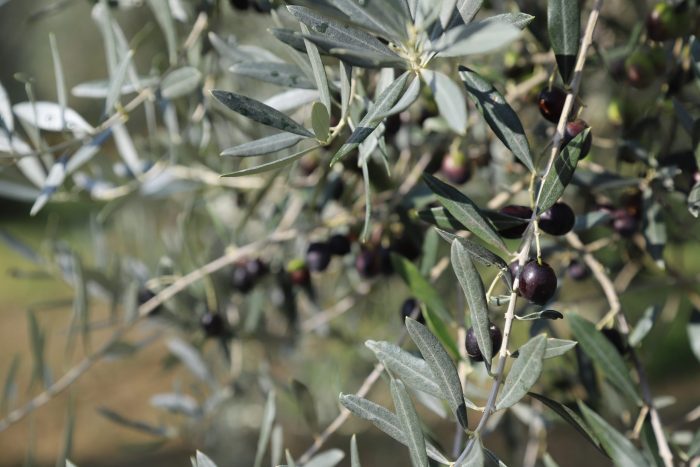 Vignamaggio organic Extra virgin olive oil is the result of the perfect symbiosis between territory and company philosophy. A Tuscan excellence that offers a sensory experience of great personality while fully respecting the environment.

The richness of the Chianti area, already valued by the Etruscans and Romans, with traces of their settlements preserved up to the present day, acquires the landscape structure known until today only from the Middle Ages. At the time, castles and villas were built around the area, between Florence and Siena. These farms, with their lands, subsequently, in peacetime, with the agrarian rebirth, are used as vineyards. A fertile territory with quality wine since 1400, when the term “Chianti” appears in the documents of the period to indicate the wine produced.

In 1716, the Grand Duke of Tuscany Cosimo III, wishing to protect the name of the territory, which had already become known, established the boundaries of the production area, which still correspond approximately to the current 70,000 hectares. Since that announcement, the first legal document in history, which marks the delimitation of a wine-growing area of production, the fame of Chianti is known to all, to the point that its 33 producers, in 1924, founded the first Italian Consortium to protect the production of Chianti. Starting from 1300, the Black Rooster, symbol of the peace reached between the two Tuscan republics, became the insignia of the Military League of Chianti, as well as a symbol of the Consortium. 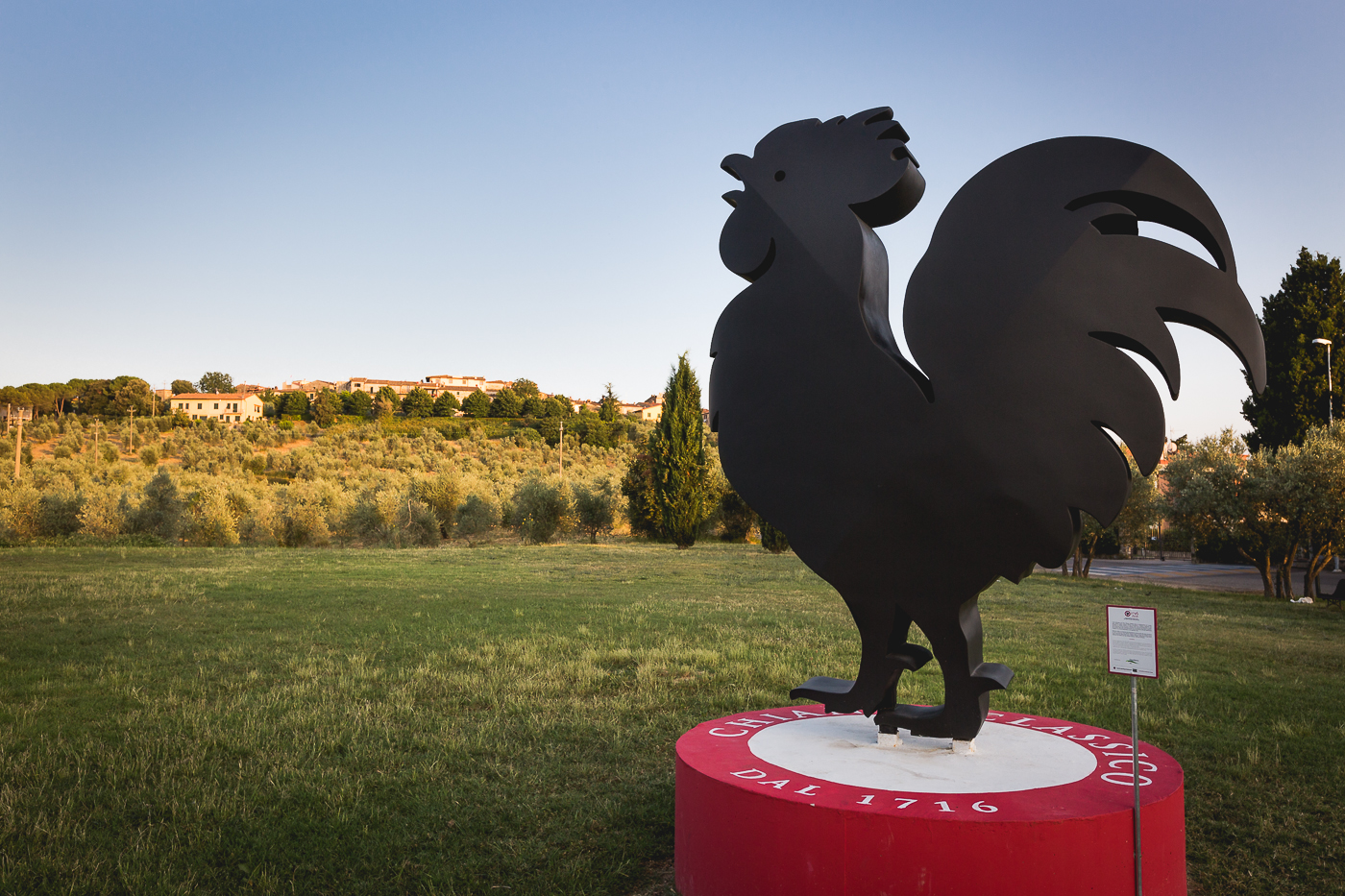 The reputation acquired by Chianti allows its production also in other Tuscan territories, with the same practices of the territory of origin. For this reason, in the ministerial decree of 1932, the Chianti area is defined as the “area of ​​oldest origin” and the wine produced in its territory is given the name of “Classico”, to distinguish the original from the other “Chianti” products. outside the historical production area.

In 1984, the entire Chianti denomination obtained the Controlled and Guaranteed Designation of Origin, the highest recognition for quality Italian wines.

In 2005, the Black Rooster logo was compulsorily applied to all bottles of Chianti Classico wine and oil, to reinforce the identification of a territory and its products.

The characteristics of the climate (continental but without particular temperature variations) of the land and of the altitude (between 200 and 800 meters) make Chianti an ideal area for the production of quality wines and Extra virgin olive oil. 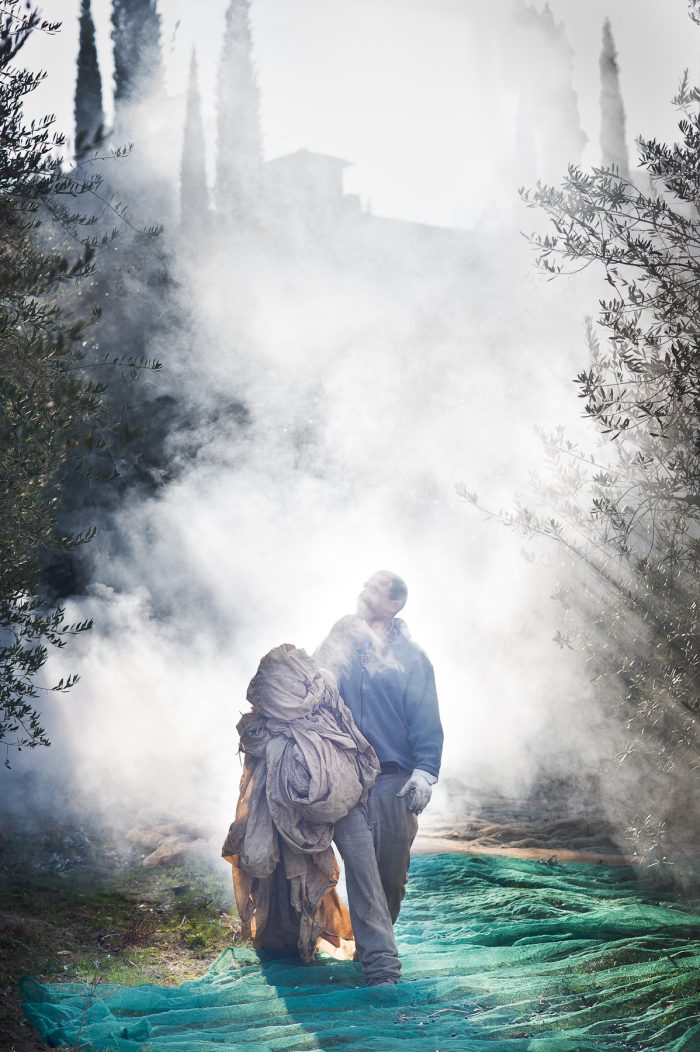 For six hundred years, Vignamaggio has been a Tuscan excellence producer of classic Chianti wine and EVOO,  internationally renowned. Organic farm and vineyard, the result of a perfect synergy between tradition and innovation.

Over 400 hectares, in the heart of the Chianti Classico, distributed in vineyards, olive groves, vegetable gardens, orchards and a semi-wild breeding of Cinta Senese. 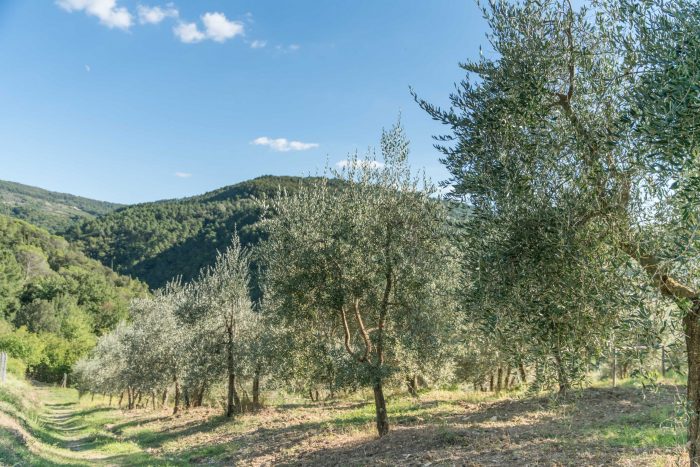 Each product is the result of love and passion for the land. For this reason, Vignamaggio production adopts very high quality levels, from the field to the bottling, ensuring taste and health “To make the day beautiful” to quote the company mantra.

Tuscany is one of the Italian regions with a long oil tradition and peculiarities that vary from area to area. One of the oldest Tuscan EVOOs is Chianti Classico, produced since 1300 and which, in 2000, obtained the protected designation of origin (PDO). 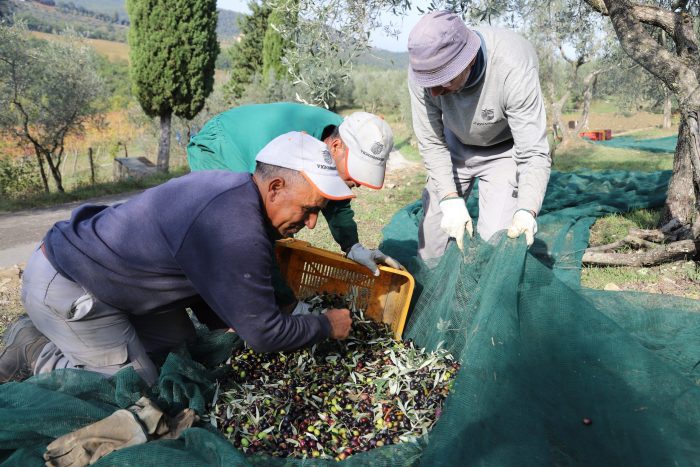 The specification of the Chianti Classico PDO provides that the olive harvest is carried out from the plant by mechanical means, with consequent washing and grinding of the olives. The process can take place either with the traditional cold pressing system, with stone millstones, or with the so-called “continuous cycle”. Both are based on the use of machinery that work at temperatures no higher than 28° C. For storage, only stainless steel materials must be used. The oil, protected by the Consortium PDO Chianti Classico Extra virgin olive oil, has a maximum acidity of 0.5%, a color ranging from deep green to green, with golden hues and a typical fruity aroma with hints of artichoke and fresh grass.

Over seven thousand centuries-old olive trees cover the sunny slopes of Vignamaggio. The olives are harvested by hand and pressed within a few hours, to keep their freshness intact. Tingling, intense flavor and fruity aroma, high content of vitamins E and polyphenols, are the characteristics that make Vignamaggio Extra virgin olive oil special. The cultivars grown by the company are the traditional Chianti varieties: Frantoio, Moraiolo, Leccino and Pendolino. 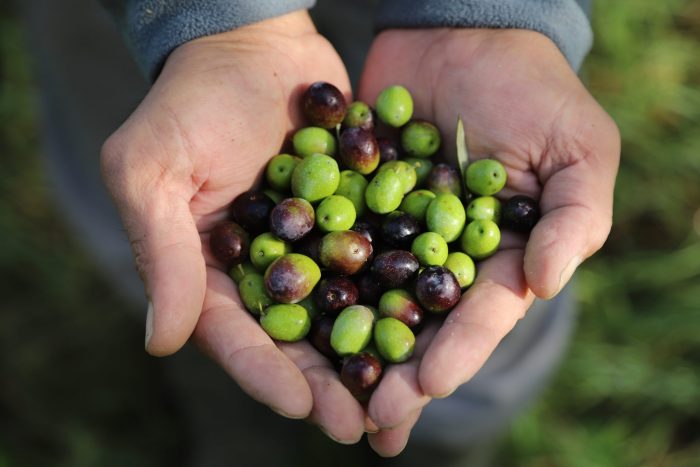 an EVOO with an important personality, produced from the four varieties of typical Chianti cultivars, which gives light spicy notes, an intense and light taste. The pungent notes of the Frantoio cultivar are mitigated by the balanced fresh and slightly fruity flavor of the Leccino, as well as by the delicate flavor, with a significant presence of unsaturated fatty acids, of the Pendolino variety. The talent of the oil masters gives life to a decidedly exclusive blend. Ideal to enhance all the dishes of the Mediterranean tradition and beyond. 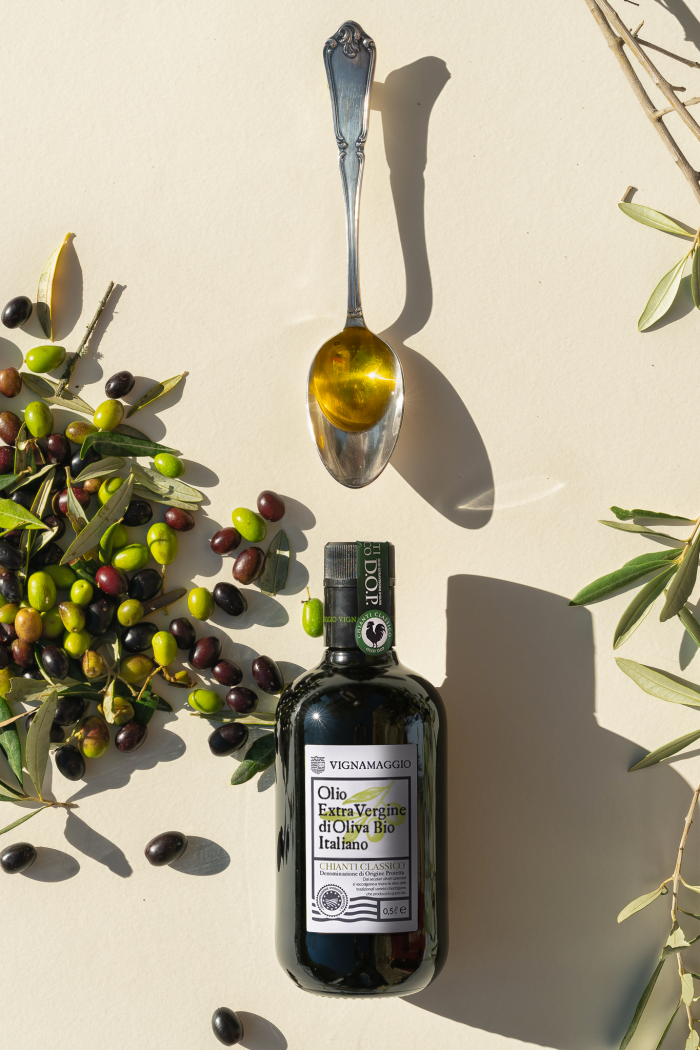 a small jewel with an intense fruity herbaceous flavor, golden yellow in color, with a high content of oleic and polyphenols derived from the prized Toscana Frantoio cultivar. Ideal for enriching salads and first courses with personality, paired with vegetables. 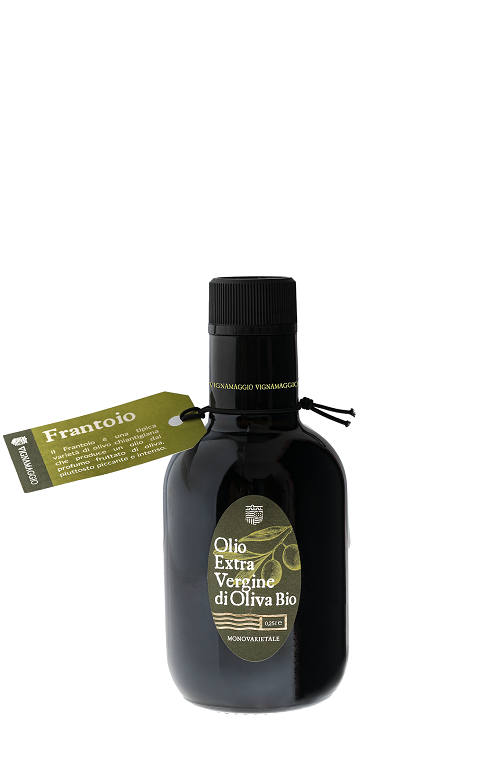 ORGANIC EXTRA VIRGIN OLIVE OIL ITALIAN CHIANTI CLASSICO: also born from the wisdom of Vignamaggio oil masters, skilled in creating the perfect blend between the Frantoio, Leccino and Pendolino cultivars, the Chianti Classico EVOO refers to some of the following characteristics (already set out):

Total CMP (phenolic antioxidants) (method of the Experimental Station for the oil and fat industries): greater than 150 ppm;

color: from deep green to green with golden hues; 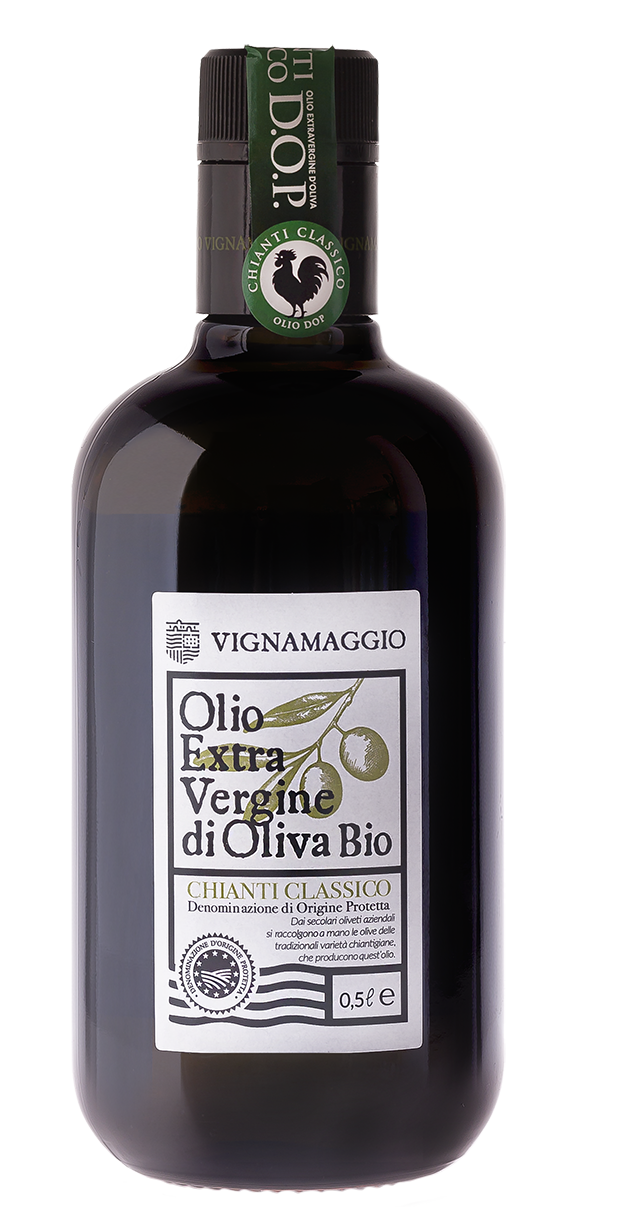