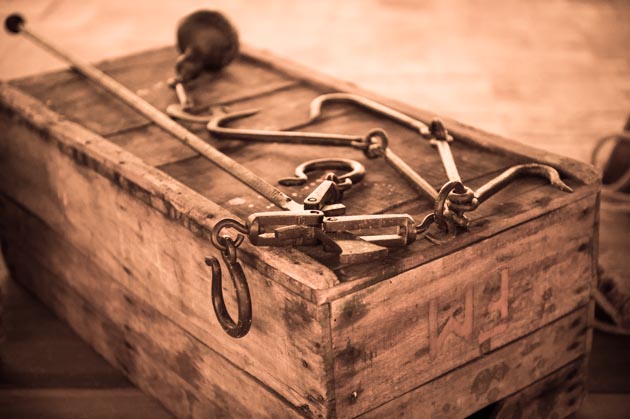 The Parma Wine Museum, located inside the Parma Food Museums, tells the story of the vine and wine in the Parma area. A centuries-long history that Giancarlo Gonizzi, curator of the Museums, tells in this interview. A heritage that museum experiences like these safeguard and promote to the fullest. 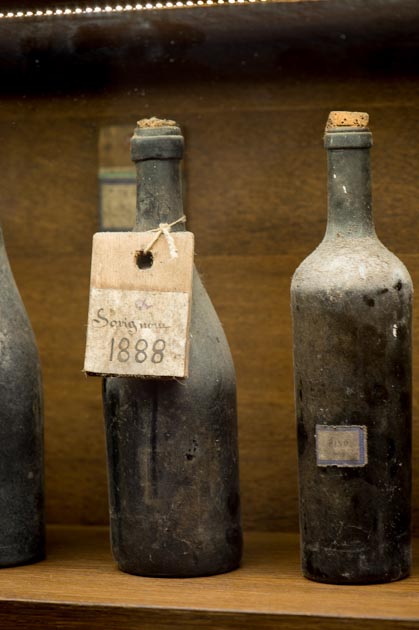 What story does the Parma Wine Museum tell its visitors?

Extremely developed in Roman times, viticulture has left important cultural testimonies in the Parma area. The museum layout testifies to this through six different sections.

The first room, set up in collaboration with the National Archeological Museum, is dedicated to the archeology of wine in the Parma area, with objects and images from the excavations in the area, which document how the way was born in this area, introduced by the Celtic populations, “Modern” to drink wine, frank and in glasses, abandoning the Greek and Latin use of watered and spiced wines.

The second room explores the aspects related to the characteristics of the vine plant and viticulture, retracing the traces of this cultivation in the Parma area, also presenting tools and objects of use from the last century and a film on the technique of the vine “married” to trees in rows, typical of the area. 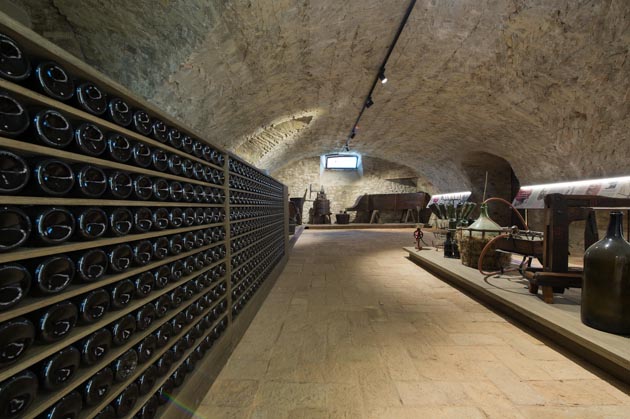 Inside the third room, tools and ancient objects tell the harvest and the preparation of wine, while images and documents tell the stories of the local wine: from medieval arts to French techniques introduced by the Bourbons, to Garibaldi’s love for Malvasia, to Giuseppe Verdi’s passion for viticulture.

The descent into the fascinating Renaissance icebox turns into an enveloping experience: 360° images tell, in the heart of the museum, the role of the vine and wine in myth, history and art, immersed in a millenary culture rich in traditions.

After crossing the moat of the Rocca, we arrive at the barrel room. Here, you can discover the history of wine containers and the trades related to them: the glassmaker and the cooper. But there is also space to deepen the fascinating history of the corkscrew and to know the “key words” related to wine. 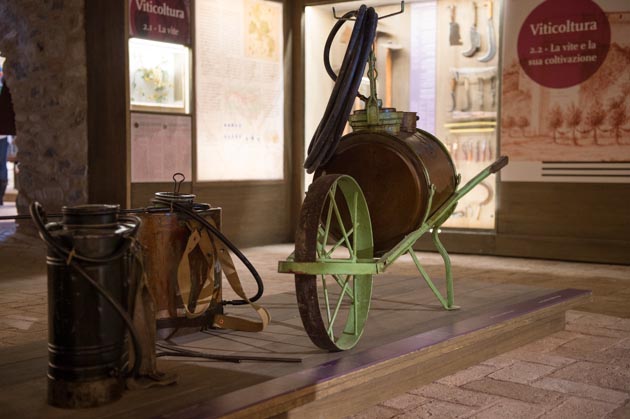 The sixth room presents the fruits of Parma viticulture: the pioneers of the sector, the history of the labels, the cultivated varieties, the wines produced, perfect to be paired with the excellent cheese and cured meats of the area, the wineries to visit in the area, the role of the Consorzio dei Vini dei Colli di Parma in safeguarding the quality of a constantly growing product.

The itinerary ends, dutifully, with the tasting in the wine cellar in the basement of the Rocca, which is also able to always tell new stories that it knows how to listen to. 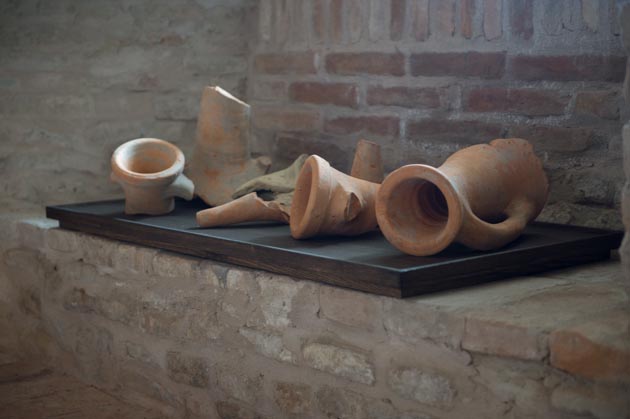 The choice of the venue, Sala Baganza and its Rocca, is not accidental, as it is also rich in history…

The archeological excavations of Sala Baganza confirm the existence of kilns dedicated to a large production of wine amphorae in this inhabited center and in that of Felino, on the opposite bank of the Baganza stream. Literary evidence from the Roman era describes the hills of Val Parma and Val Baganza shaded by vine pergolas. The choice, then, to set up the Wine Museum in the cellars of the Rocca Sanvitale allows the immersive experience of descending into the Farnese-era icebox. And the building itself – the Rocca – which houses the Museum bears witness to a rich and varied history: fief of the Sanvitale family, who transformed the original fortress into a residential villa frescoed by the greatest artists of the time, confiscated by the Farnese and chosen as their residence summer of the Dukes of Parma, the Rocca dominates the inhabited area of ​​Sala and constitutes its urban fulcrum. But it is the vineyards of Maiatico, on the hills to the south-west of the town, where Garibaldi stayed in 1861, falling in love – as well as the marquise who hosted him – with Malvasia, which he wanted to transplant to Caprera that constitute a characterizing element for the territory and for the Museum itself. 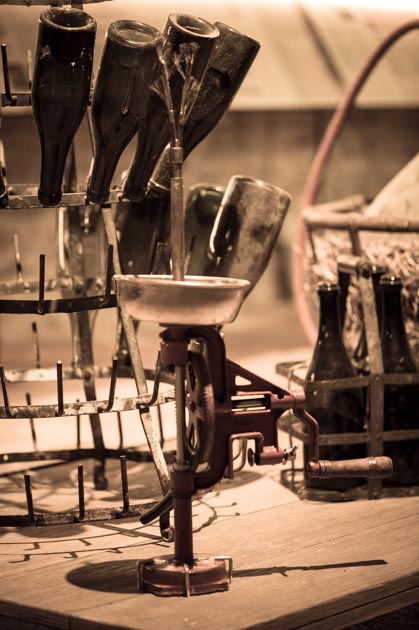 How many sections is the museum divided into and which, in your experience, seems to attract visitors the most?

The six sections of the Wine Museum intertwine historical periods and phases of work. At both ends, the rooms dedicated to viticulture in Roman times and in the nineteenth century in the Parma area. In the center, the rooms are dedicated to the cultivation of the vine, the production of wine and the cellar. At the “center of the center” is the large underground icebox, capable of giving unexpected emotions to the visitor, who arrives at the end of the descent of a long and narrow terracotta staircase.

By “pressing” with your feet the clusters that can be glimpsed (projected) on a platform in the center of the large circular room, you start the flow of images that chase each other on the curved walls, which envelop the viewer and transform the descent into this ravine, in a unique experience.

As particular and unusual is the discovery of everything that “revolves around wine”: barrel and bottle, cork and corkscrew, label: ancient tools and videos of the cooper and the glassmaker and a typological series of corkscrews allow us to deepen the often overlooked aspects of “Wine care” but fundamental to guarantee its quality. 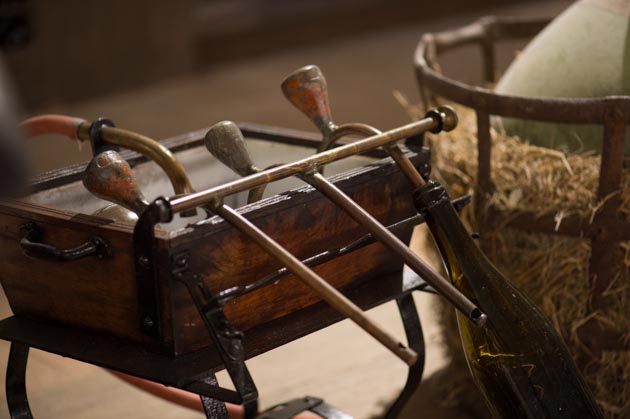 The territory, of which the Museum is an expression, is also linked to Malvasia, which you paid homage to, in 2021, with the presentation of the book “La Malvasia di Parma. Past, present and future ”, by Antonella Pizzi and Roberto Baruffini. To what extent, in the exhibition halls, is there any trace of this wine that is the symbol of the area?

A fine nineteenth-century model of grapes in blown glass and silk produced by Parma artisans represents a cluster of Malvasia and the image of Garibaldi recalls his visit to Maiatico. But the “strongest” evidence I believe is given by a series of historical bottles, dating from 1832 to 1909, all coming from the “Monte delle Vigne” – a toponym already significant in itself – which present, among the most popular wines at the time, just the Malvasia.

Furthermore, the “Cosèta d’Or”, the carved wooden bowl, once used to drink Malvasia and today adopted as a trophy for the annual prize for the best Malvasia in the area, should not be forgotten. One example – the one won by the Museum in 2014 – is exhibited in the fourth room. 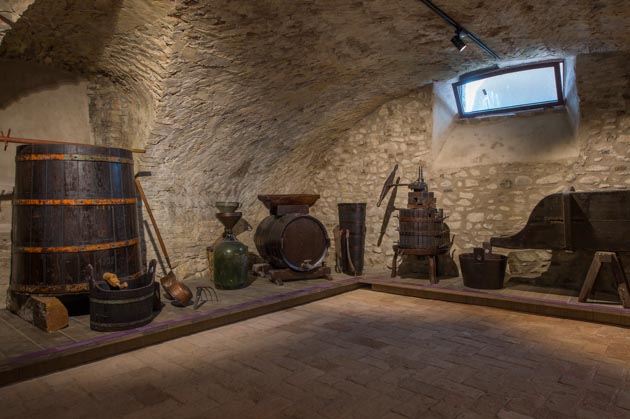 As part of the dissemination of wine culture, are there any activities planned by the museum on this front, especially to attract a younger audience?

We often hear of an emergency, which sees an increasing number of young people addicted to alcohol. The didactic activity developed at the Wine Museum aims precisely to make the new generations understand the value of wine, its characteristics and the risks associated with abuse, which mortifies both its culture and its value. For this reason, we have developed an intense didactic and laboratory activity aimed at local schools, which have free access to the Museum. 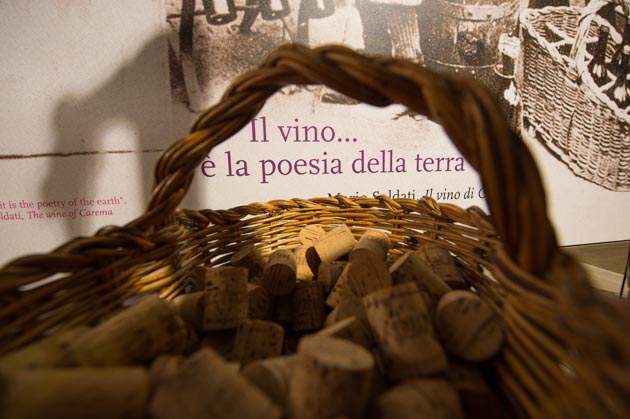 At the same time, we are inviting several bloggers to visit the Museum to grasp its specificities – in Italy there are hundreds of wine museums but this is intimately linked to the Parma area – and to enhance it appropriately. Even the “nights at the museum” designed for the little ones, in a magical and evocative environment such as the basement of the Rocca, characterize the dissemination activity.

When the general situation permits it, however, we would like to propose to the target of young adults tasting cycles of individual wines combined with historical insights related to some sections of the museum.