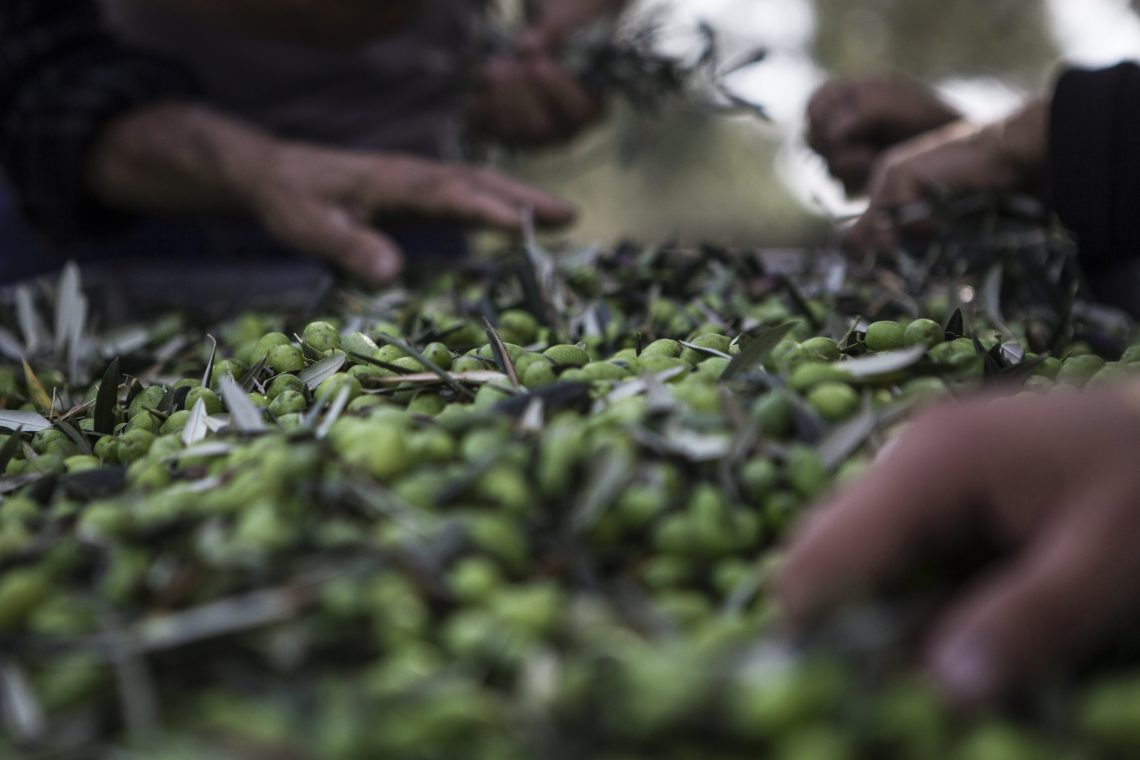 “It is normal for every family in Crete to own not one piece but several smaller pieces of land.

My family had three small olive groves and of each of them I still have memories of my childhood like my grandmother- helping us during the harvest, the smell of the donkey we used  at the time instead of a car- mixed with the smell of grass and often that of the rain, the simple Cretan delicacies we were sharing in the olive grove during lunch breaks, the smell of the mill itself when making fresh olive oil and, of course, its flavor on bread…” 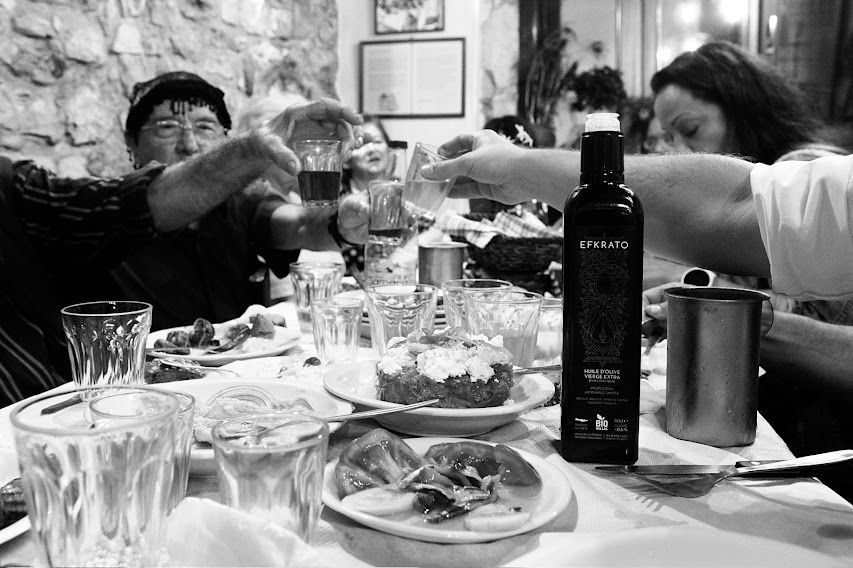 The story of Emmanuel and Andreas, cousins, owners of the EFKRATO family olive groves, seems to have come out of a novel. A story that tells the scent of a generous land like the island of Crete and the hard commitment of those who work the fields day after day in any climatic condition.

The choice to divide their lives between the city and the countryside to undertake the hard job of agricultural entrepreneurs was reasoned but also dictated by the awareness that such an important heritage, such as the family olive groves, has considerable potential that is worth the effort. Above all because so much wealth is located within a geographic, historical, and cultural context of inestimable value such as the wonderful land of Greece. 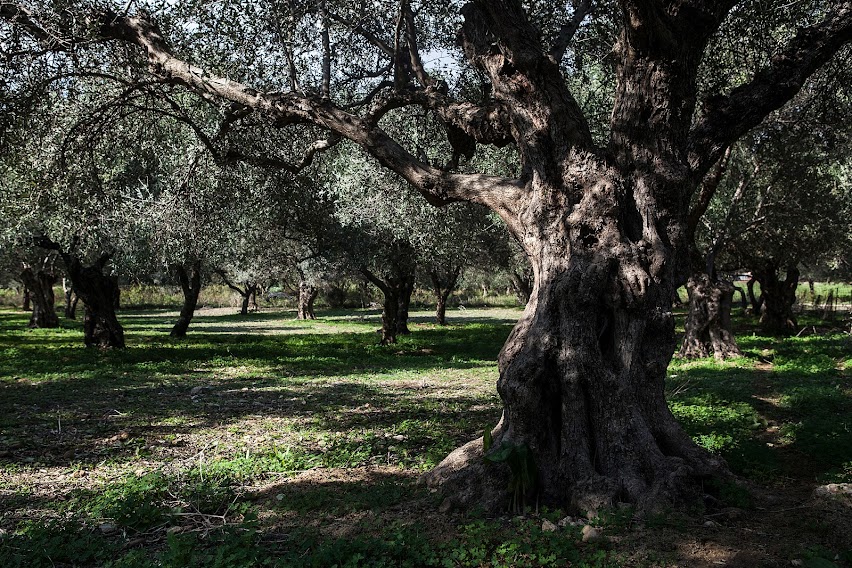 Full of enthusiasm and culturally prepared, Andreas and Emmanuel leave nothing to chance, aware that, despite the precious raw material and pristine land, the apprenticeship never ends as they underline: “The apprenticeship was long and still hard. One of the most challenging obstacles has been and sometimes still is to address the often contradictory views of the local population regarding best practices. It is logical that country people look at “newcomers” with a certain curiosity. Today, one of the main learnings is to observe with patience, respect the rhythms of nature and try to avoid actions that could have a negative impact on the trees and the nature that we love so much. We feel part of nature and this way of thinking does not allow us to try to exploit it but to respect its rhythm. It is natural for us to try to understand how nature works and try to work with it instead of just  pushing to increase production.”

The challenges to be faced today concern above all the climate as Emmanuel observes: “Climate change represents a serious threat in general and, in particular, for the olive groves of the Tsounati variety which need cold, long and rainy winters to thrive. We believe that nature itself can provide the answers and this has led us to seek natural ways to help our olive groves, such as, experimenting with biodynamic cultivation. If climate change forces us to harvest even earlier – continues Emmanuel, the fruits will suffer from high temperatures. 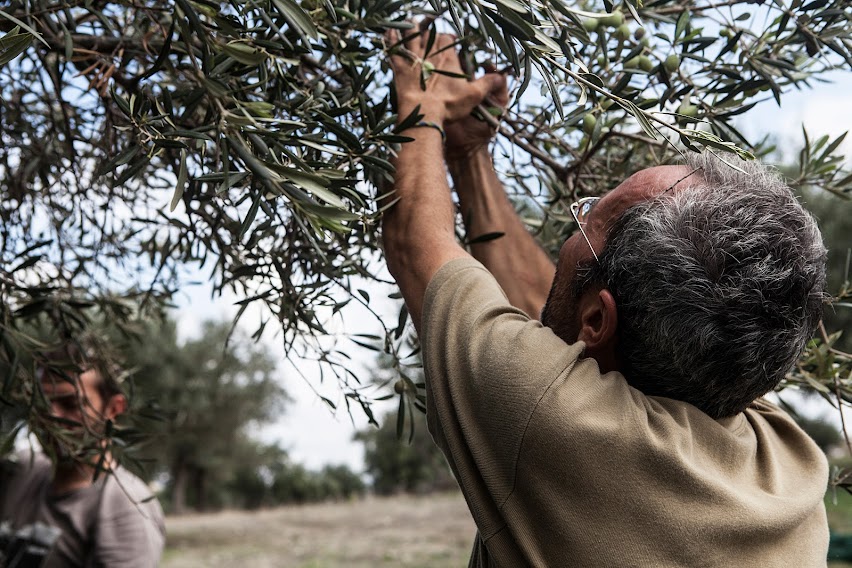 Emmanuel also points out how the long summers of recent years are increasingly visible: “If until a few years ago we wore warm clothes during the harvest in October, now you can go swimming after work. These high temperatures have a negative effect on the fruit of the olive tree – continues Emmanuel- since fermentation can begin minutes after the fruit has been cut from the tree. To compensate for this, we use refrigerated trucks to transfer the fruit to the mill as soon as possible. Even higher temperatures during winter are not beneficial for trees, while higher temperatures during the flowering period in spring can have devastating effects on fruit quantity. Even less rain does not do much good especially in cases (like ours) where the olive groves are not irrigated. 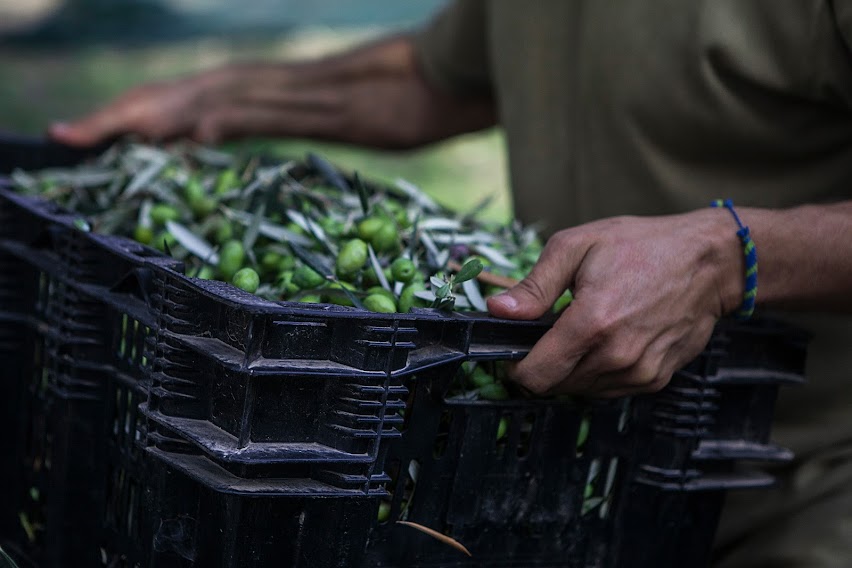 It is equally difficult- as Andreas point out- to spread the culture of good healthy EVOO in a complex economic period where, too often, even in countries where food is culture and the quality of the raw material is excellent, such as the Mediterranean countries, people prefer to save money on artisanal EVOO at the cost of quality, as well as health itself.

It’s proved economic rule, Andreas believes that food must become cheaper to allow people to afford other goods. If you want people to buy more clothes, you need to make sure they can afford enough food. If you want them to spend more on accommodation, you need to make sure their budget allows them to afford accommodation. As an essential necessity, food production is at the base of this chain and as such is under constant economic pressure. Understandably, people don’t like to change their habits – let’s say eat in restaurants once a month instead of twice in order to be able to afford a bottle of high quality Extra virgin olive oil. They would rather compromise with a lower quality simple olive oil. 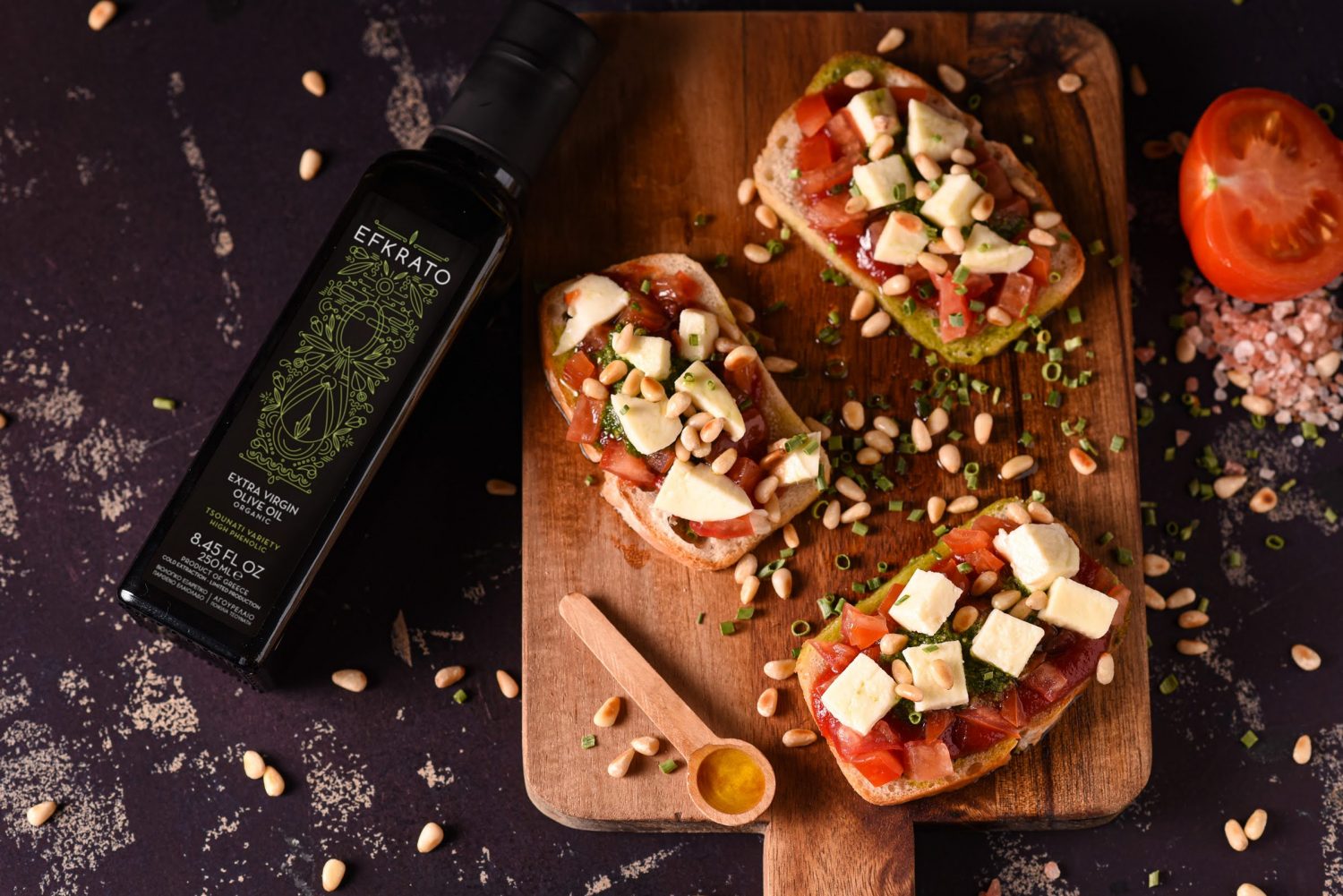 It is true – continues Andreas that interest in artisan products and cooking is growing (there are countless cooking programs on TV!) But, at the same time, it is also true that convenience food is increasingly exhibited in our supermarkets . How do these two contradictory observations fit together? As for olive oil, the food industry has learned a lesson from small producers like us: they have realized that they cannot continue the business as usual and sell a mule for a horse. This is a second learning about how the economy works: sooner or later, the successful new business models of small farmers are copied by large-scale producers, which, in turn, makes it difficult for us to compete.

So the million-dollar question is: How can small scale producers be viable while being obliged to follow significantly more expensive practices?” 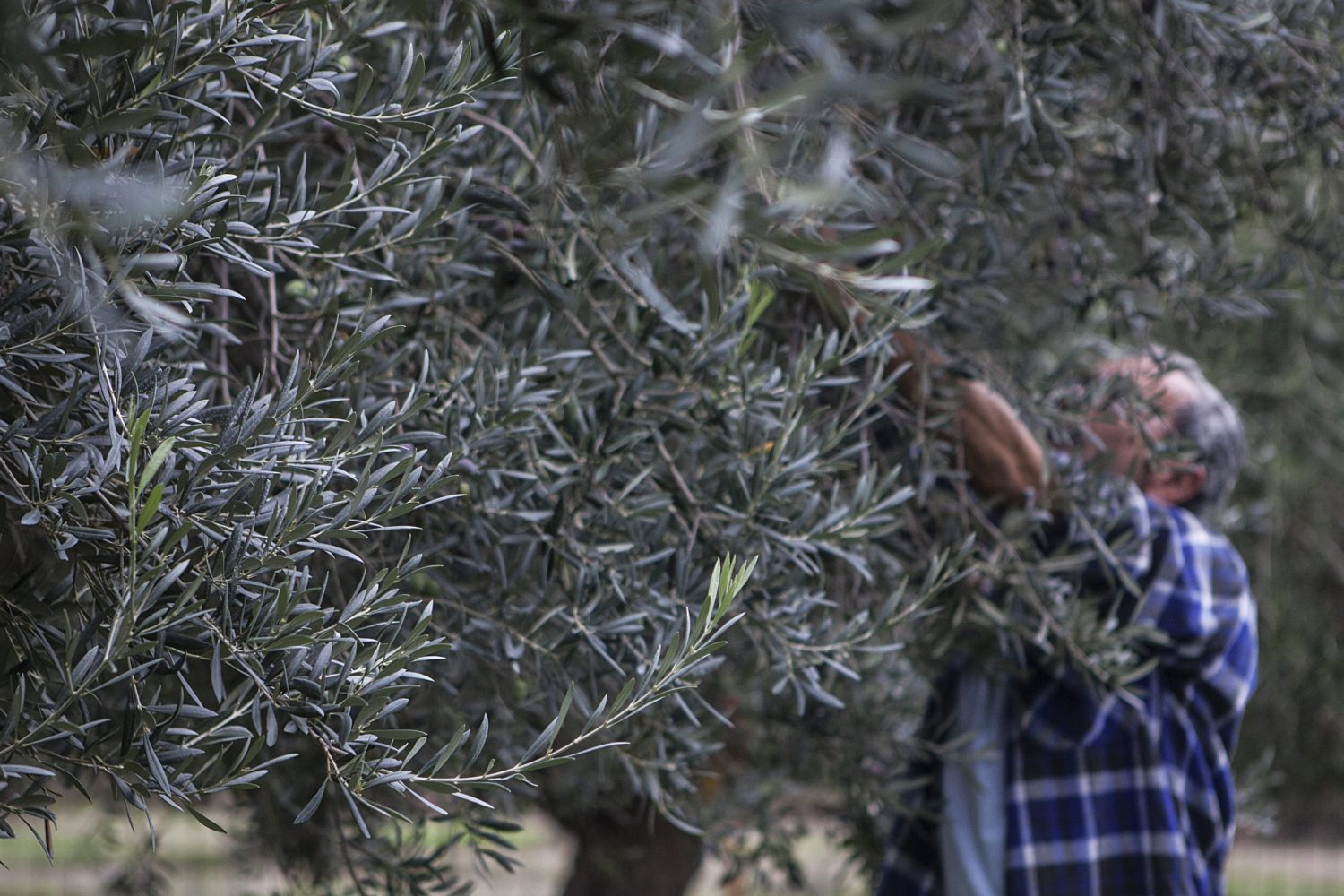 Andreas’s question is simple: no industrial-type company will ever be able to match a small olive oil company in quality, flavor, taste and sustainability.

As the two cousins state: “Fortunately, more and more people realize the importance of living sustainably, the importance of Extra virgin olive oil for our health and the culinary pleasure it can offer. All this creates favorable conditions for an EVOO like ours even if every little success really requires a lot of work”. 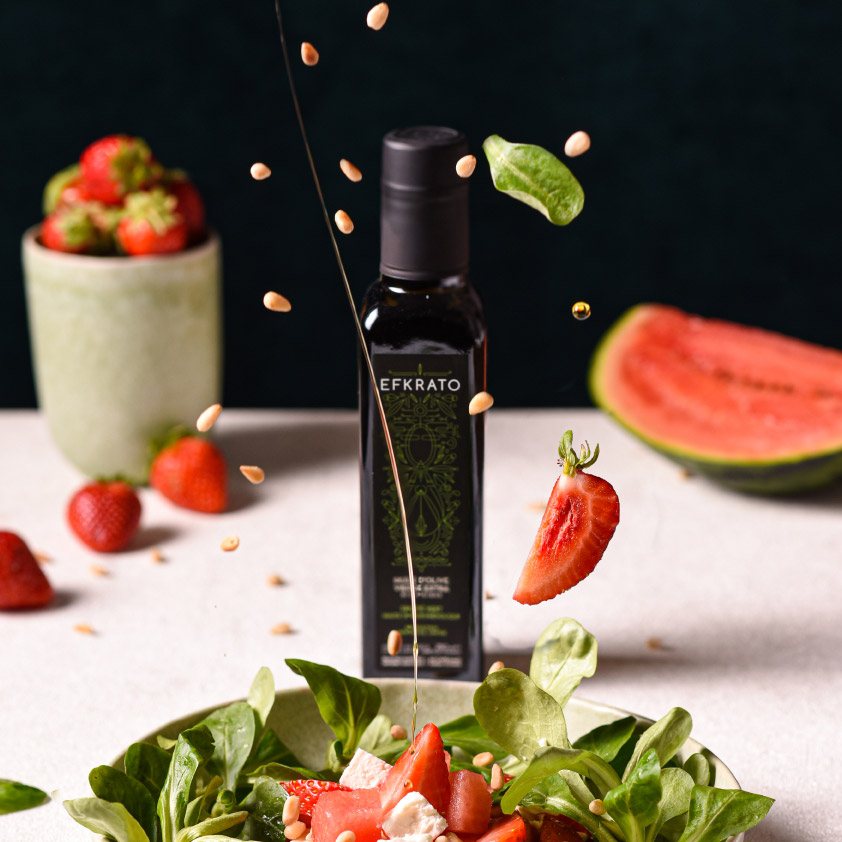 In our first interview Emmanuel and Andreas highlighted a very important passage: “The cultivation methods we use are more rigorous than those of organic farming and practically impossible to apply in large-scale olive oil production. We “collaborate” with sheep and, occasionally, with horses that supply the olive grove with high quality organic manure in exchange for its weeds, while experimenting with biodynamic farming methods”. Sustainability is the added value of EFKRATO, and so is “Tsounati”, the typical ancient Cretan variety with which the company produces oil. 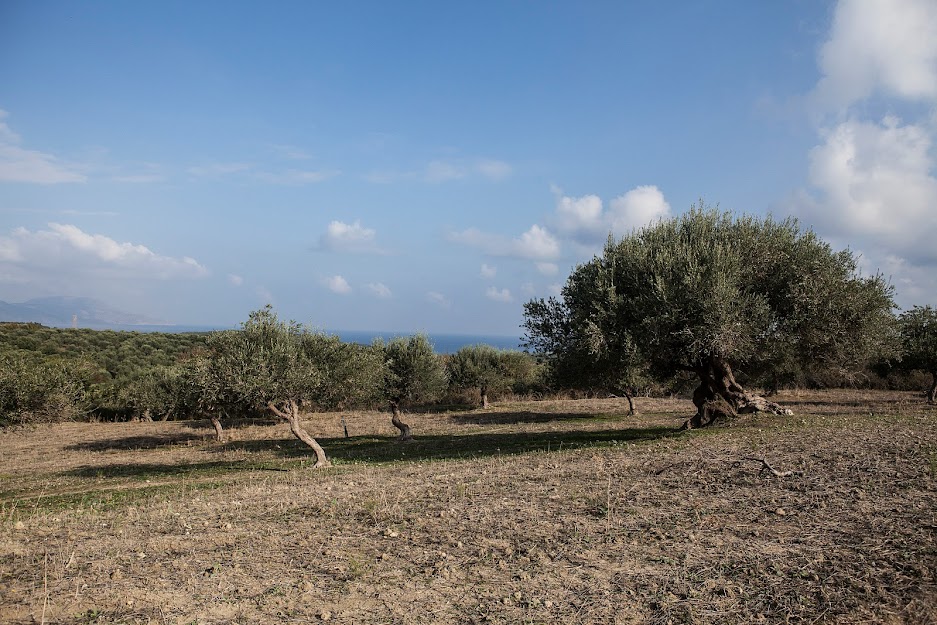 When I ask what makes this cultivar special, Andreas replies: “First, the fact that Tsounati trees make up only about 5% of the total olive trees in Greece. (The Koroneiki tree accounts for about 75%). In the past, many Tsounati trees, many of them centuries old, have been unrooted and replaced by Koroneiki because the latter are more productive and easier to grow. In the short term, this made sense. We doubt that this development in a monoculture is good for the environment. From a gastronomic point of view, Tsounati olive oils like EFKRATO have a more pronounced sensory profile. Bitter and spicy have a relatively long aftertaste (compared to koroneiki). ”Emmanuel adds other details to the characteristics of this truly rare cultivar:“ Its olive oil is denser in the mouth, more buttery and has a distinct organoleptic profile. The size of the fruits is quite large and this, in turn, means that they are more delicate and require more careful handling to produce a high quality olive oil. Especially when harvested early, olives cannot be easily cut from the tree, and they do not form fruit clusters like koroneiki does, while in general the tree’s branch structure is more disordered, making harvesting more challenging. It is one of the oldest varieties in Crete and today it is mainly grown in the western part of Crete. It is said that the Venetians decided this because the temperatures there are lower and more suitable for this variety. The quantities it produces can have considerable deviations from year to year, and perhaps this, together with the fact that its cultivation is generally more demanding, has been the reason why it is not being preferred by younger farmers”. 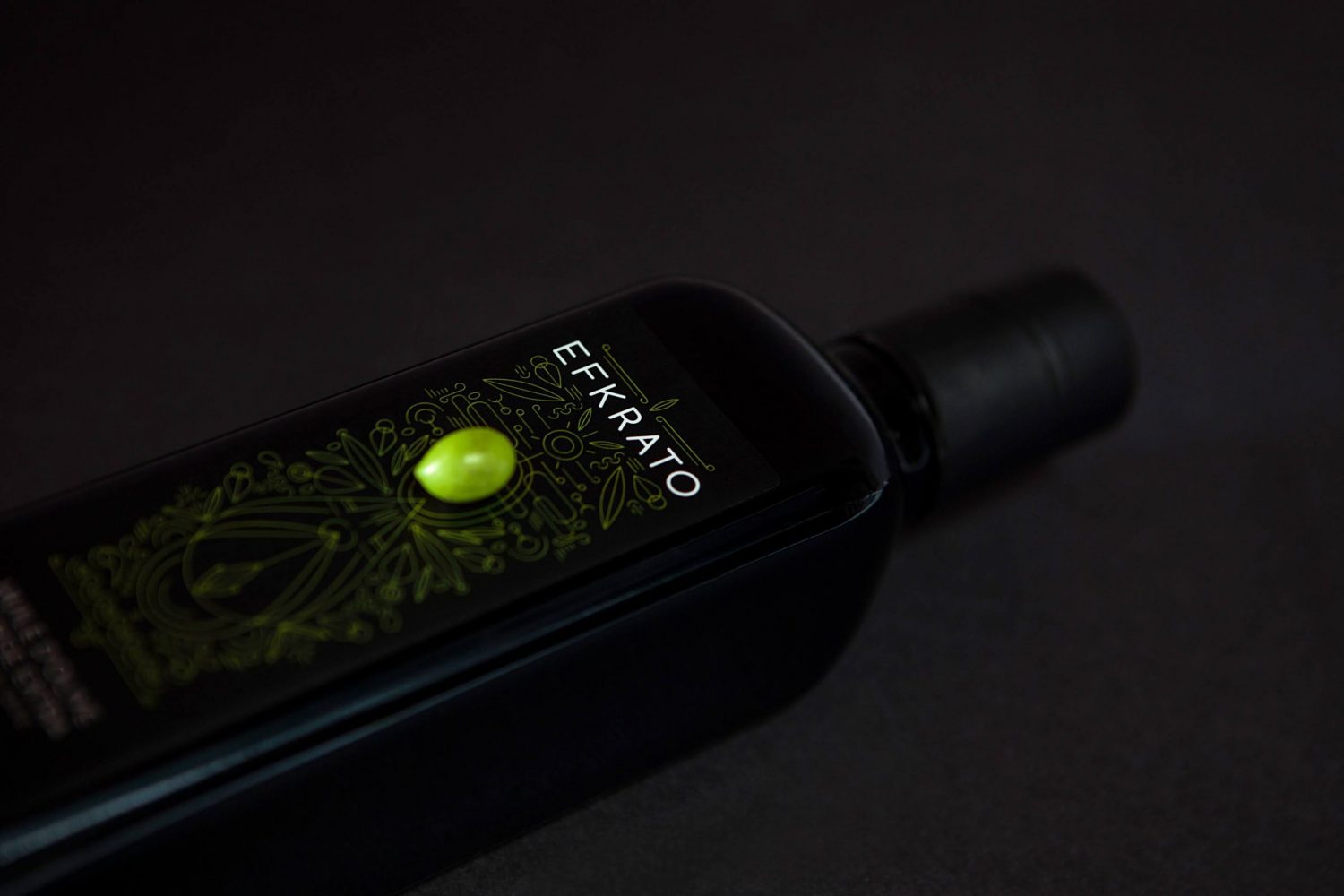 How much knowledge is behind a bottle of EFKRATO EVOO! Emmanuel and Andreas have created a company that is still young but with a millennial tradition behind it. An award-winning EVOO that pushes the two cousins ​​to give their best for future challenges. “We will continue to try to make this business model economically sustainable without compromising the quality of EFKRATO, says Emmanuel.”

“EFKRATO was born as a hobby-adds Andreas. This has allowed us the flexibility to make decisions not always based on what makes economic sense but rather on what might allow us to stay in line with our values ​​and aspirations. At the moment, we are working to make it accessible to people in more places in the world despite its limited production”. 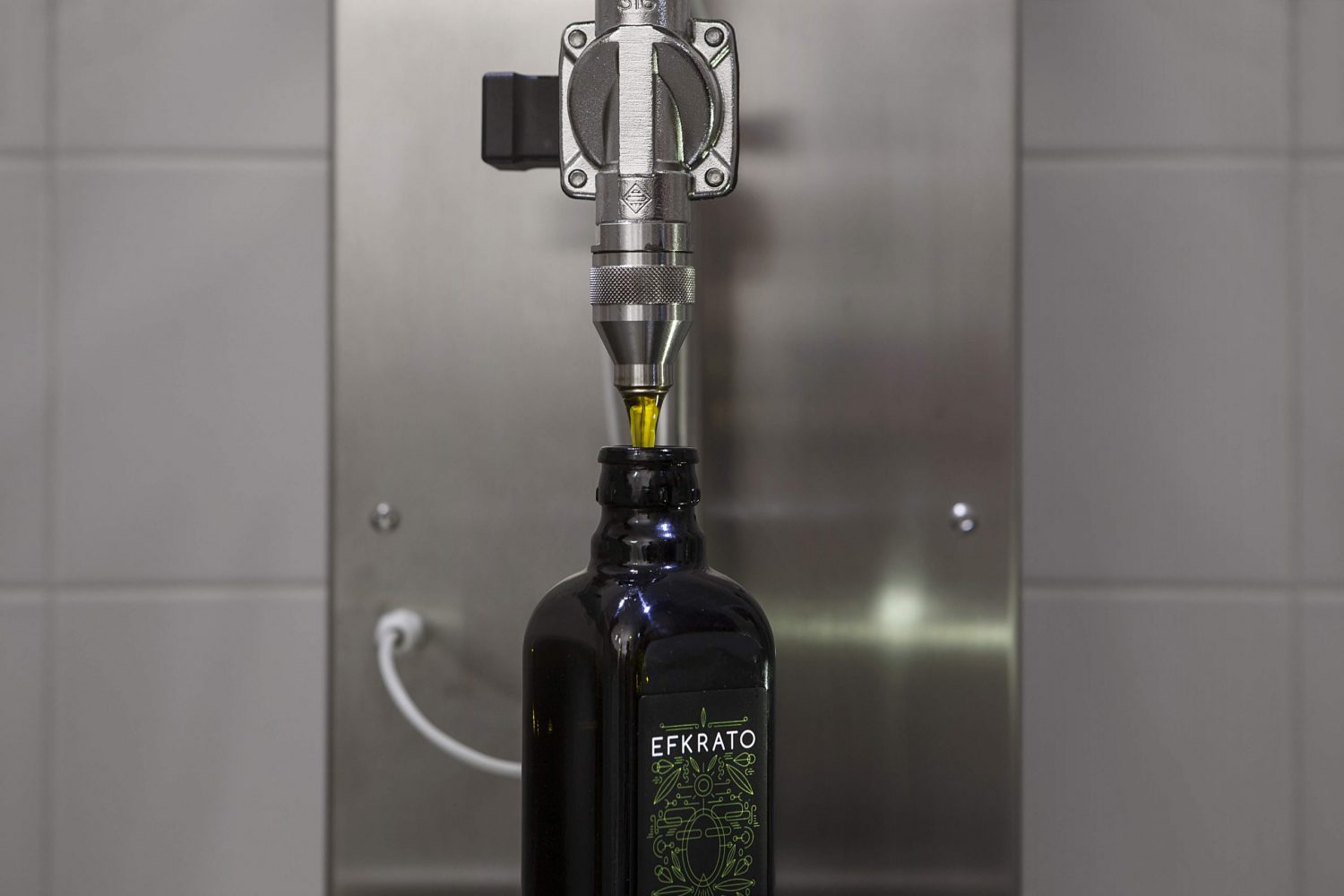 As Andreas points out – each product is linked to its origins, not only in the sense of terroir but also culturally. Each drop of EFKRATO is a worthy representative of Cretan gastronomy and culture.