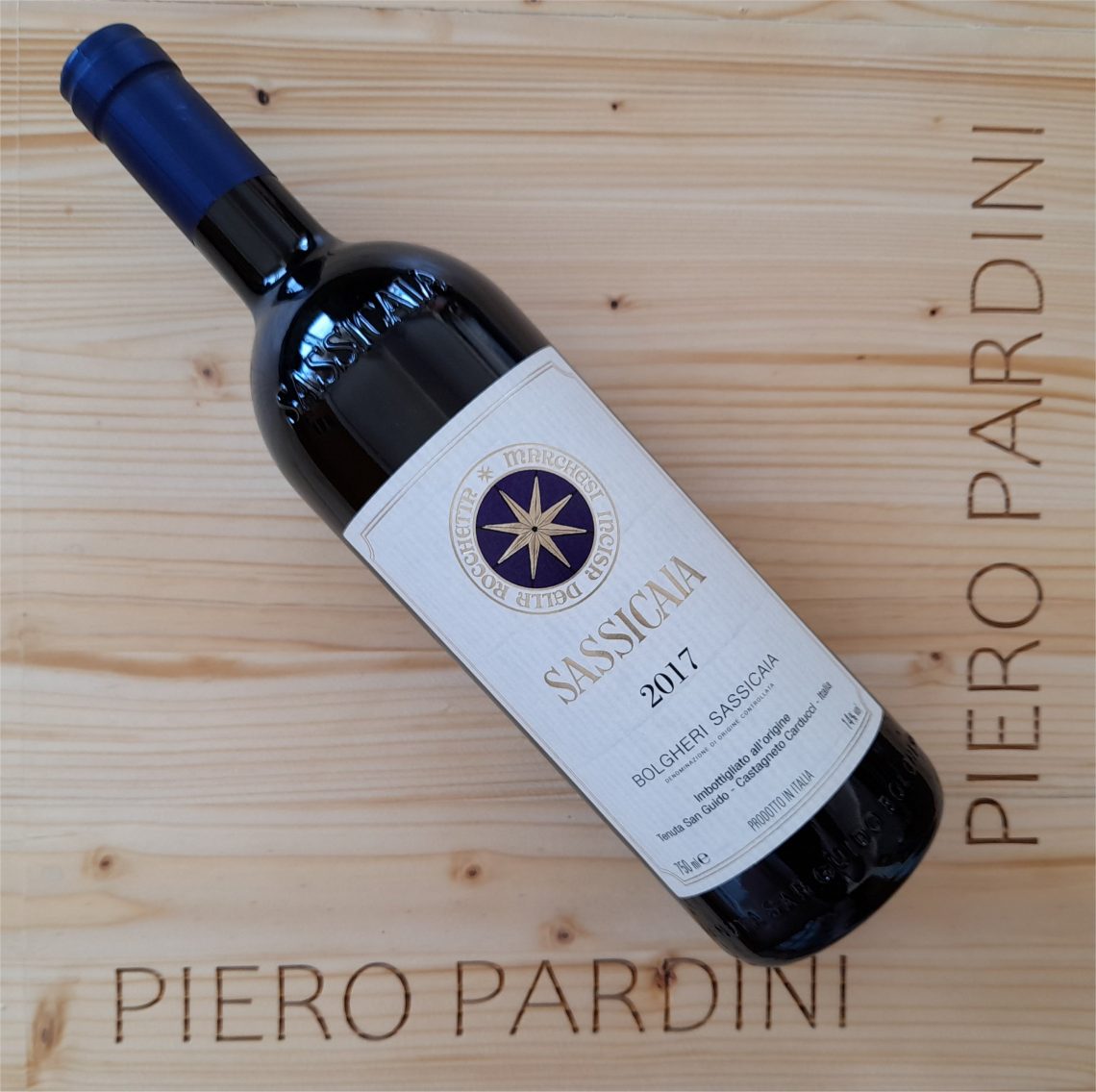 Wine: Sassicaia
Variety composition: 85% Cabernet Sauvignon, 15% Cabernet Franc
Denomination: D.O.C. Bolgheri Sassicaia (D.O.C. Sassicaia).
Alcoholic strength: 14% vol.
Vintage: 2017.
Land: The land on which the vineyards suitable for the production of this wine stand are included in the territorial delimitation of the DOC SASSICAIA. They show different and composite morphological characteristics, with a strong presence of limestone areas rich in marl, as well as stones and stones (from which the wine takes its name) and partially clayey.
Altitude: 100-300 m a.s.l.
Exposure: West / South-West.
Training system: spurred cordon.
Vines density per hectare: from 3,600 vines / ha to 5,550 vines / ha for older plants and 6,200 vines / ha for more recent ones.

Climate trend and characteristics of the year: The 2017 vintage was very hot and sometimes wrongly associated to 2003 or 2012. Actually, even though it was a year when the end of spring and summer were characterized by temperatures often above the norm, the vegetative conditions of the plants and the results in organoleptic terms of the grapes but above all of the wines produced in the territory of Bolgheri, are very pleasant. The autumn and the first part of the winter were characterized by rather harsh temperatures, caused by the north winds and accompanied by average rainfall. Conditions that have favored the necessary vegetative standstill of the vines, favored the natural elimination of the main parasites of the vine and also contributed to maintaining the necessary water reserves in the subsoil in balance. The drastic and somewhat bizarre change in temperatures that rose well above the average at the end of March, has conditioned the flowering but above all the setting, creating clusters of lesser development and sparse bunches with smaller size and a lower quantity of berries. As a consequence, we had a reduction in production volume around 18-20%. The same cannot be said for the quality of the grapes, there was a very sustainable condition for the vines that reached a regularly maturation although the summer was very hot. The rest of the summer was characterized by sunny days, high temperatures and no rains until the end of July. Around mid-August, time when the phenolic ripening of the grapes begun, a perturbation of Atlantic origin brought rains for 2 or 3 days and caused the temperatures to drop significantly. This allowed the plants to continue to carry out their phenolic ripening more than the technical one. The vegetative conditions of the vines and above all the vital functions have never suffered for stress conditions and this has allowed the plants to continue to carry out their photosynthetic capacity on a regular basis for the benefit of the phenolic action determining in the ripening of the grapes. The rains that fell during the most crucial moment of the development of the vines have also allowed the berries to increase in weight and size thanks to cellular distension, diluting the concentration of sugars (glucose and fructose) while maintaining in perfect balance the good endowment of polyphenols. The temperature difference between night and day from Mid August to the end of September, have helped an extremely favorable conditions of primary and secondary aromas. 2 Moreover this has facilitated the increase in acidity that was really indispensable to give freshness and elegance to the musts.

Harvest: The entirely manual harvest began about 8 days in advance starting on August 30th with Cabernet Franc first and then with cabernet Sauvignon. The picking started with the vines on foothills and it was completed with the vineyards on the hills at about 360 meters above sea level (Vigna di Castiglioncello and Vigna del Quercione) between the end of September and the beginning of October.

Winemaking notes: Selection of grapes through a sorting table to eliminate impurities and any presence of camber.Soft pressing and destemming of grapes in order not to break the skins of the berries. Subsequent spontaneous alcoholic fermentation in stainless steel vats at a controlled temperature of around 28° – 30° C (without the addition of external yeasts). The macerations lasted about 11-12 days for Cabernet Franc and 13-14 for Cabernet Sauvignon. Frequent pump-overs out door and frequent délestages during alcoholic fermentation have favored elegant musts with good structure and excellent aromatic component. The spontaneous malolactic fermentation was then carried out in stainless steel tanks and was completed by the end of November.

Ageing: At the end of malolactic fermentation, the wine was transferred to French oak barriques (one third new wood and the rest, first and second passage) where it rested for 24 months of aging period. During this time, the various masses have been kept separated according to the vineyard of origin and monitored. The blending of the selected mass one was made at the end of December, one month and a half prior to the preparation for bottling and subsequent refinement phase in the glass before marketing. 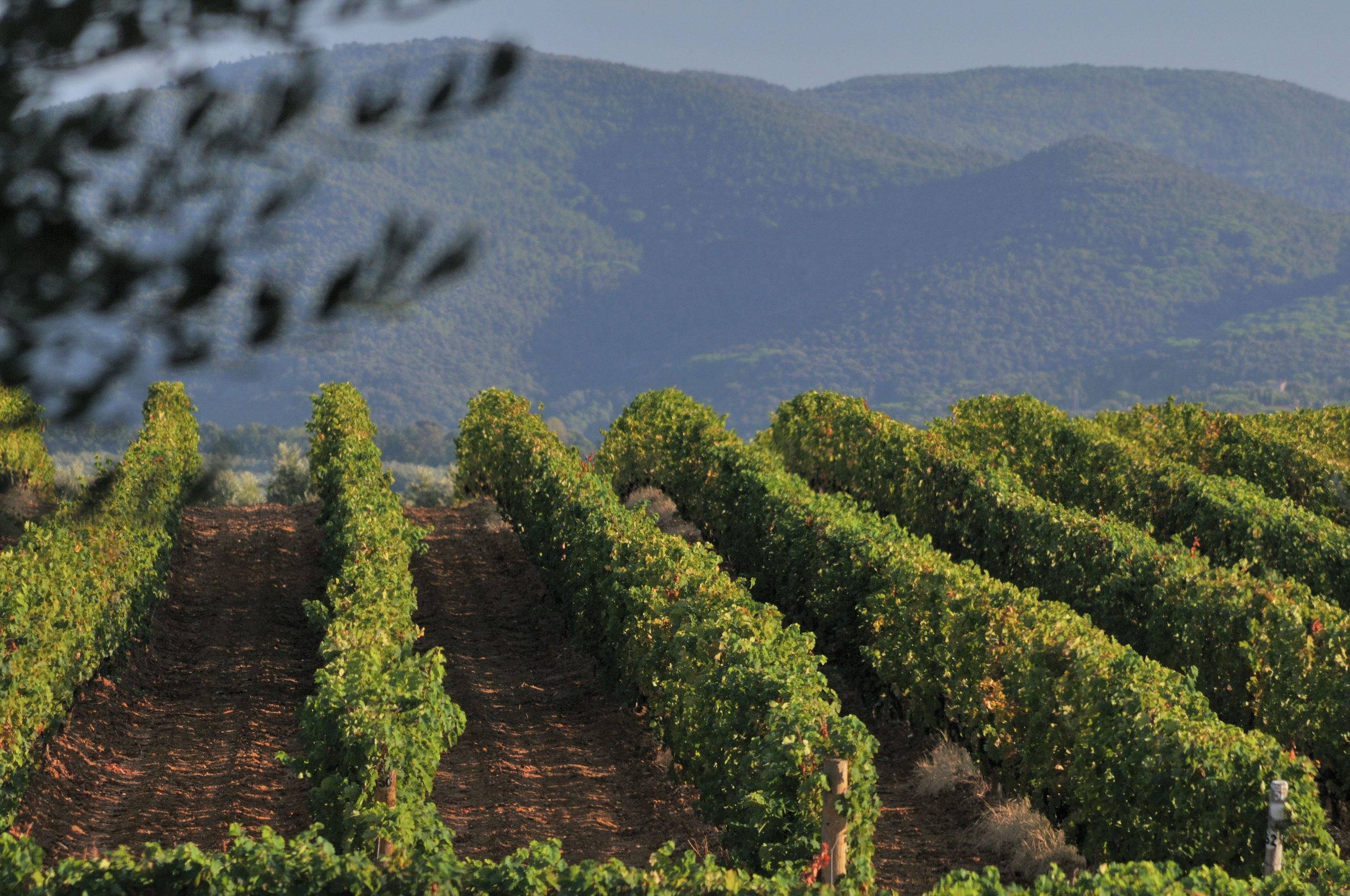 Review:
The sample is consistent, bright, ruby red in color, not particularly intense.
The nose is very intense and complex in its scents. It opens with floral notes reminiscent of a potpourri of wildflowers, followed by fruity hints such as mulberry blackberry, red currant and black cherry jam, delicate nuances of Mediterranean scrub, cardamom and star anise, closing with toasted notes of hazelnut and delicate nuances of sandal.
On the palate it is full, precise and balanced in all its components. All olfactory perceptions are confirmed in the mouth. The tannin is velvety, fine. The persistence never seems to end, delicate toasting and perceptible fruity notes remain perfectly integrated and balanced in the mouth. Impossible not to repeat the tasting.
Although “young”, it is a wine of undisputed quality. In a few years it will be able to express itself with excellent quality. A sample to drink, but also to keep and forget for a few years, and then live it in its entirety. It is recommended in combination with wild boar in dolceforte.