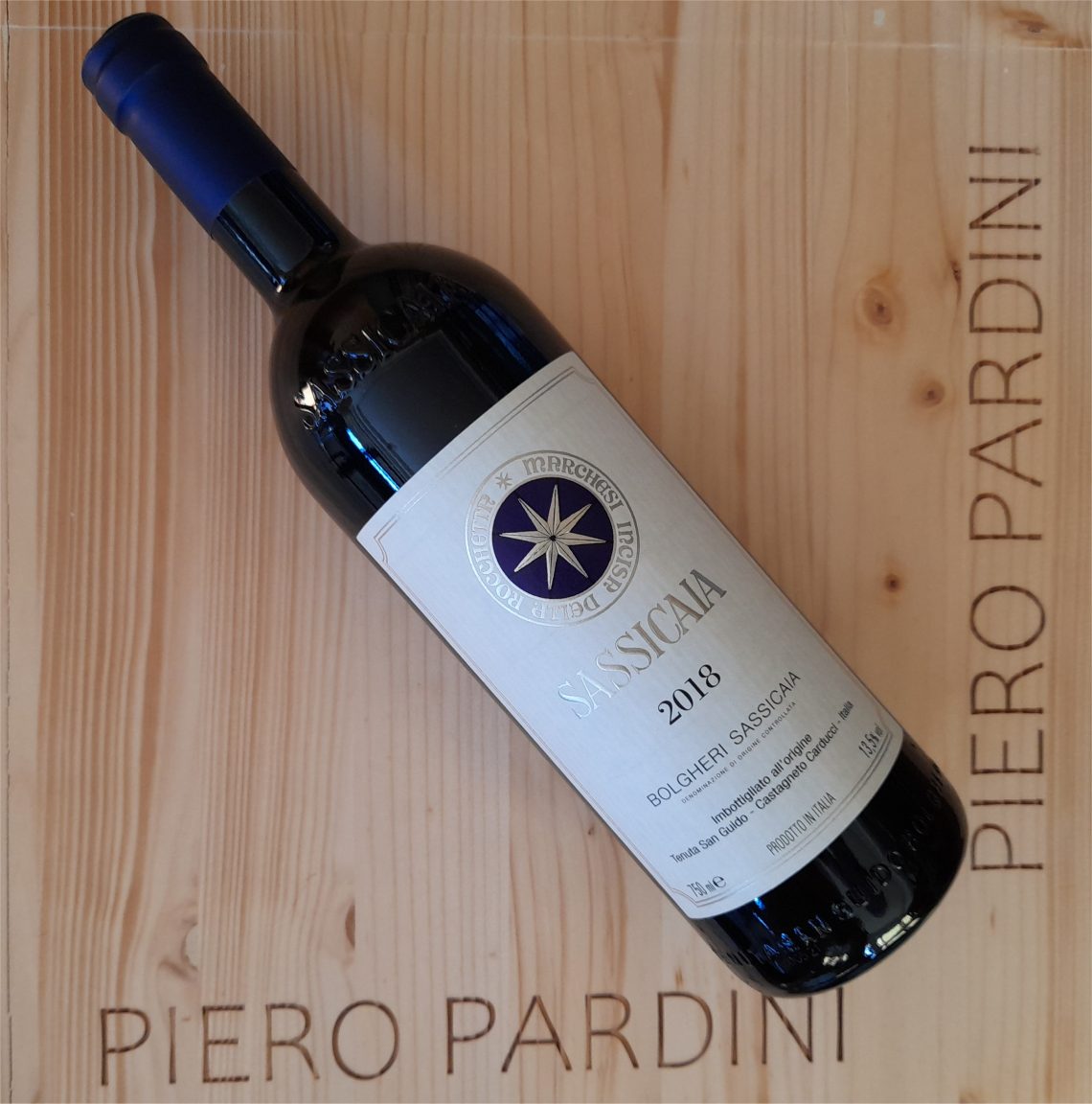 Wine: Sassicaia
Variety composition: 85% Cabernet Sauvignon, 15% Cabernet Franc
Denomination: D.O.C. Bolgheri Sassicaia (D.O.C. Sassicaia).
Alcoholic strength: 13,5% vol.
Vintage: 2018.
Land: The land on which the vineyards suitable for the production of this wine stand are included in the territorial delimitation of the DOC SASSICAIA. They show different and composite morphological characteristics, with a strong presence of limestone areas rich in marl, as well as stones and stones (from which the wine takes its name) and partially clayey.
Altitude: 100-400 m a.s.l.
Exposure: West / South-West.
Training system: spurred cordon.
Vines density per hectare: from 3,600 vines / ha to 5,550 vines / ha for older plants and 6,200 vines / ha for more recent ones.

Climate trend and characteristics of the year: The 2018 vintage was a classic year for Sassicaia. Autumn and early winter were characterized by temperatures above seasonal norm with sporadic rains, sometimes alluvial. This situation lasted until February, with greater intensity of rain and some snow at the highest altitudes. The situation was radically changed by “Burian”, a wind from Siberia that in the last week of February, caused temperatures to drop well below zero, accompanied by snowfalls, even in Bolgheri. A situation that had not occurred for years, with day and night temperatures that for over a week have always remained between -2 and -5 ° C. From an agronomic point of view, this was positive in causing the vegetative stop and eliminating the parasites of the vine. It also helped feed the water reserves. At the beginning of March, temperatures rose slightly. But immediately after that, a further wave of frost affected all of Italy, especially the Tuscan coast. The second part of March and early April were characterized by temperatures below seasonal average and rainfall. Spring arrived in the second decade of April, with rising temperatures and sunny days. May started with rain and windy days. The vegetative trend was excellent, very luxuriant, given the really favorable year also in terms of the water reserve of the soils and temperatures. Throughout the period from spring to late summer, temperatures remained normal, without excess heat and with occasional rains, that favoured the phenological phases of flowering and fruit set in a perfect way. During the month of July only, the heat became intense, with limited temperature range. This situation lasted until just before mid-August, when a turbulence with abundant rains, brought refreshment to the vines and normalized the temperatures. From August 16th the good weather was re-established, though with no more excessive heat days. As a result, the hanging time of the grapes was longer, so they could ripe for longer time, especially the more precocious varieties such as Cabernet Franc and Merlot (although the latter is not used for Sassicaia). Sunny days, cool temperatures (especially at night) and the absence of sea winds, allowed for a truly excellent phenolic ripening of the grapes, with the possibility of developing positively both aromas and acidity.

Harvest: The entirely manual harvest began regularly, although with a delay of about 7-8 days, compared to the norm. It started on September 6th with Cabernet Franc, continued on September 16th with Cabernet Sauvignon, until October 4th, ending with the vineyards located at higher altitudes of about 360 m above sea level (Vigna di Castiglioncello and Vigna del Quercione). The production was slightly lower than expected but of fantastic quality, with an excellent level of phenolic and technical maturation, not excessive sugar content, guaranteeing moderate alcohol content and excellent aromatic complexity.

Winemaking notes: The grape selection was carried out on a sorting table to eliminate impurities and some rare cases of millerandage. Pressing and destemming of the grapes was soft and delicate, in order not to damage the skin. Subsequently, spontaneous alcoholic fermentation was carried out in stainless steel at a controlled temperature of about 26 ° / 27 ° C (without any inoculation of yeasts). The macerations in this vintage lasted for about 13-15 days for the Cabernet Franc and 15-17 days for the Cabernet Sauvignon. Frequent pumping over and délestage were repeated every day during the primary fermentation. As a result, the musts were characterized by great elegance and marked acidity. The malolactic fermentation took place in steel starting with the first ten days of November and ending at the end of the month, allowing the introduction of the musts in wood from the first ten days of December 2018.

Ageing: At the end of the malolactic fermentation, the wine was placed in French oak barrels, (for almost two third new wood and the rest, first and second passage) where it spent a period of aging of 24 months. The masses were kept separated according to the origin of the vineyard and monitored in the long fining period, for a further selection. The assembly of the selected mass was carried out at the end of December 2020 after which the preparatory stages for bottling began. Bottling took place in January. Subsequent phase of refinement in glass before the appearance on the market.

Review:
The sample has a ruby ​​red color, bright, not intense, of good consistency.
On the nose it is an aromatic riot. Fruity hints of blackberries, juniper berries, scent of broken dark chocolate stick, but also notes of scrub and Mediterranean herbs and a delicate nuance of precious woods.
The sip is unique, precise, almost perfect “given the young age”. In the mouth it is persuasive, delicate, with a silky and well-smoothed tannic texture, good balance, with a long and persistent aftertaste of ripe fruit and fine spices.
A wine with great aging potential, reminiscent of the 2016 vintage.
It is recommended in combination with Chianina with flakes of white truffle from San Miniato.