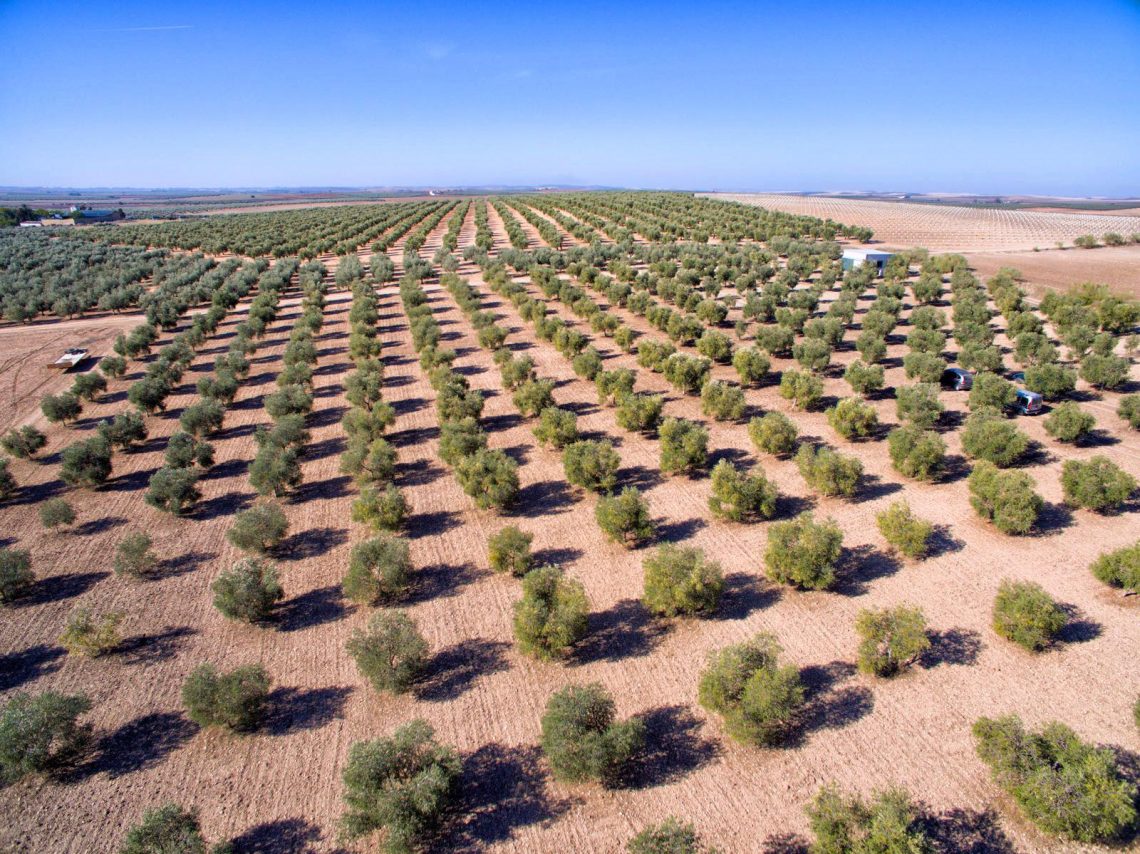 Behind every company there is always the story of a bet. And behind every bet there are stories of women and men who build dreams.
Those who bet on the land and cultivate it according to the dictates of organic and sustainability also give us consumers a dream: that of a better future for the younger generations.
Those who bet on land also give each of us a certainty: that of bringing healthy and good products to the table. A privilege nowadays.
In 2015, María Miró Arias, a veterinarian, mother and wife, bet on that land cultivated for decades by her family, buying from her retired father the land that today gives its name to one of the most awarded Spanish extra virgin olive oils in the world: 1948 Oleum.
Maria belongs to the fourth generation of olive growers of this family business born thanks to the entrepreneurship of Don Evaristo Miró Cordobés, in the first half of the twentieth century.
A story that tells of a Spain rich in tradition in the sector. Until 1948, the oil obtained from the mill, located in the Finca Recacha, in the Sevillian city of Lantejuela, was marketed under the name of “Herederos de Evaristo Miró”. 1948 was the last year in which the oil was marketed with that name, so when the great-granddaughter Doña María Miró Arias, decided to resume the business, in the Sevillian city of Écija, she chose 1948 as the name of the company next to the Latin translation of oil, ÓLEUM. 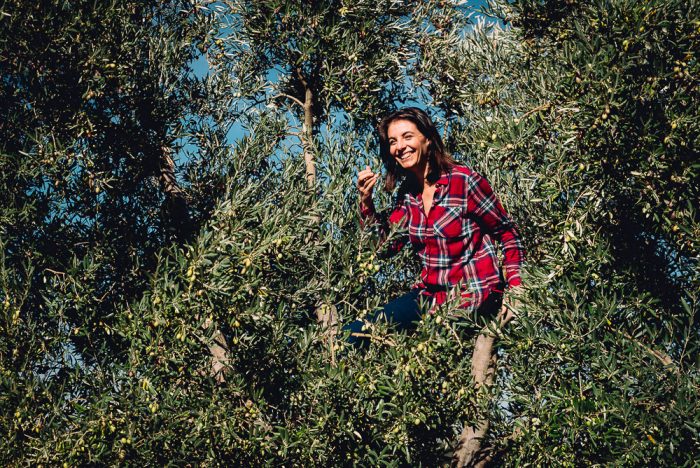 Our project was born in 2015, when we took over the family ecological olive grove. We are the fifth generation of farmers and, although up to that date, our professional life had been different, we have always maintained that roots to the land. My name is María Miró Arias and I am a veterinary doctor, specialized in the conservation of native breeds and rural development. With the birth of my second daughter, family and work reconciliation became impossible for me, so I decided to take some time off (sometimes it is good to stop a bit and look with different eyes). 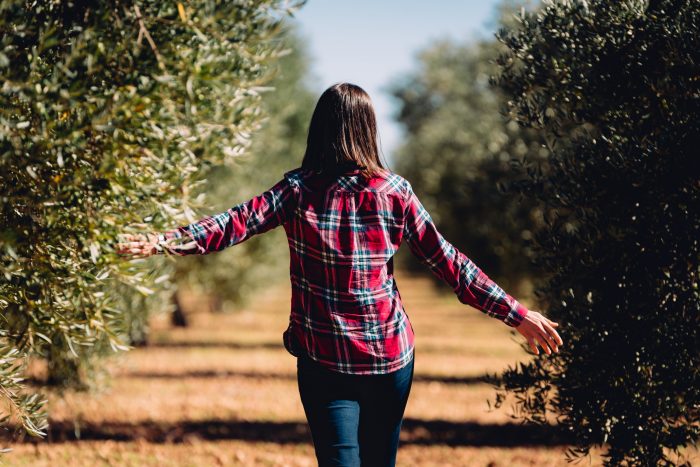 But my concerns and my biological rhythm did not handle that emptiness very well, I needed a purpose, a new challenge. For this reason, my family proposed to me the management of the ecological farm. My father had retired a few years ago and we thought it was a good time for the generational changeover. Thus, we began this sweet transition, with countless moments together, father and daughter. Very tough, as all beginnings are, but very satisfying. Until that date, my family sold the harvested olives to an organic oil mill, where they congratulated us year after year for the quality oil obtained from them; Thus, during the 2015 harvest, the spark arises: at the foot of the field, I suggest my father buy a part of the harvest from him to market our own oil. That same afternoon, my husband and partner, Rafael Arevalo, and I, pencil in hand, and with ideas flowing at full speed, we began to create a name, an image, a brand, a project that has permeated our philosophy of life. 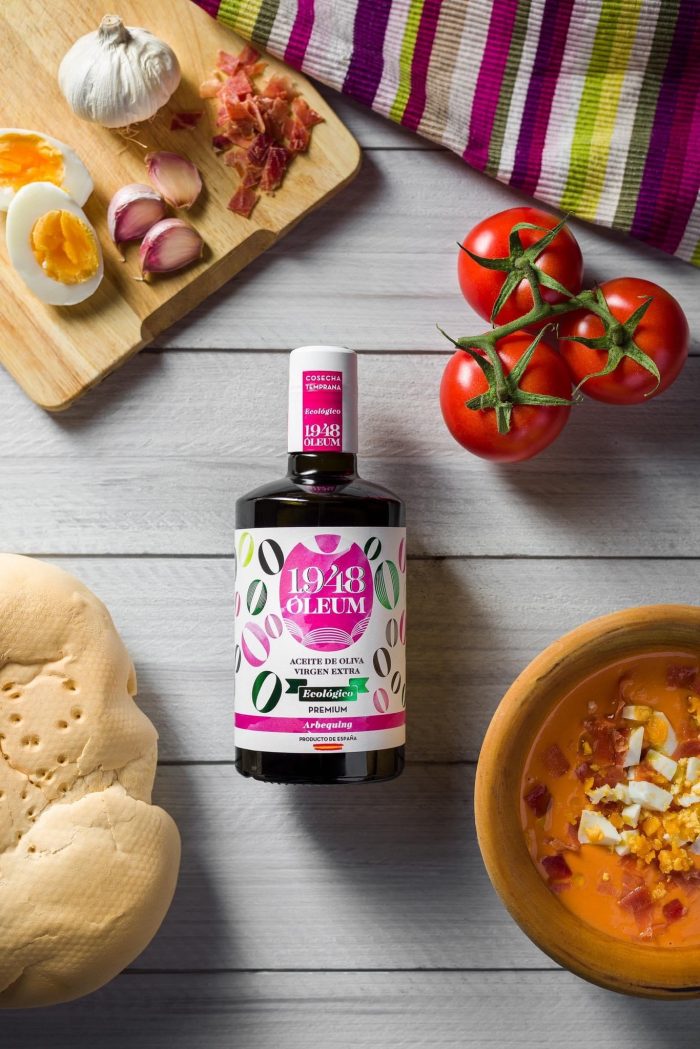 What does the name mean?

Since the beginning of the 20th century, in the Recacha farmhouse, together with my great-great-grandparents (and later, great-grandparents and grandparents) lived several families who worked for them. I had cattle (sheep, chickens, pigs…), a grain mill, an oil mill. love hearing the stories from my father, sometimes funny, sometimes harsh and sad. It was in 1948, when the oil mill became obsolete and oil was never made on the farm again. Since then, my family has sold the harvested olives to other mills. In addition, in 1948, my parents and in-laws were born, who cared to give us an education and studies but never took us away from our territory. They transmitted to us that respect and love for the countryside that we share with our daughters today. Thus, that year is a fetish date for us, it represents the fact of resuming the bond with oil and, in addition, it is a tribute to our parents, as thanks for instilling in us a love for agriculture. On the other hand, we also wanted to commemorate the importance of oil in our area for more than 2000 years, when our liquid gold was the economic engine and currency of our hometown, Ecija, baptized Astigi in Roman times. As a curiosity, it is worth mentioning that the Monte Testaccio in Rome is an artificial hill built in an orderly manner, based on broken oil amphorae, 80% from the Betica province. The inscriptions carved with calamus in the still fresh clay of the amphora include the names of Hispalis, Corduba and Astigi en masse. (Seville, Córdoba and Écija). 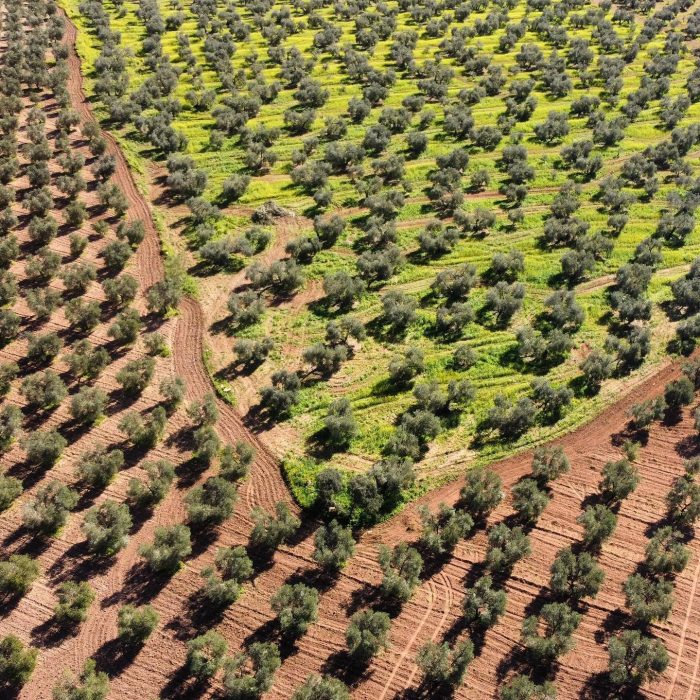 In which area of ​​Spain is the farm located and what is the characteristic of this geographical area to make olive production special?

Our farm is located in the south of Spain, at the confluence of the municipalities of Lantejuela and Ecija, in the area of Recacha, in the heart of the Sevillian countryside, (Andalusia, Spain). It is a fertile territory, surrounded by vast expanses of cereal crops, beautiful sunflowers and olive trees, seas of olive trees. The soil is rich in nutrients and with a structure adapted to our climate, plagued by high temperatures and low rainfall, but with mild nights almost all year round where there are usually no frosts that damage leaves or fruits. In recent years, super-intensive olive plantations are proliferating, whose hedge arrangement reminds us of vineyards, but we remain faithful to the traditional olive grove, where each tree has its space and its roots can explore looking for water and nutrients without competing with each other. and in balance with the environment. The farm is located within a protected area called Red Natura 2000, where wetlands and lagoons abound and whose biodiversity of native flora and fauna and migratory birds are a claim for ecotourism and ornithological tourism. We live in paradise and we love to go on oleo tourism routes, workshops and tastings in the olive grove itself. 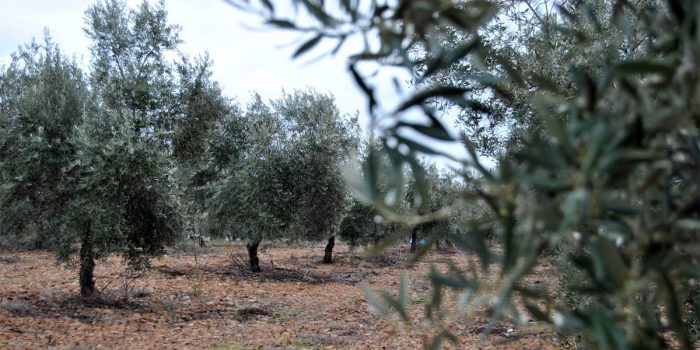 What are the cultivars on the farm?

Our organic olive grove has two varieties of olive trees: Arbequina and Picual, which provide us with two different oils with very characteristic nuances and appreciated by the most demanding palates. The Arbequina variety is native to the north of Spain, of Catalonia. Its thick and leafy crown and its good adaptation to the south, has made its plantations proliferate a lot in our area. Our Arbequina olive oil has green, sweet and fruity fruity, pleasant aroma, surprising notes of tropical fruits, banana, apple and dried fruits in the mouth. Ideal for grilled fish, fruit salads, light dressings and pastries. The Picual variety is native to eastern Andalusia, in the province of Jaén. They are more slender trees, resistant to drought and highly adapted to our climate. Our olive oil of this variety offers an excellent intense and balanced green fruity, slight bitterness and itching, aroma of the countryside on the nose, nuances of olive leaf in the mouth. Its explosion of flavor in the mouth makes it ideal to pair with steamed vegetables, green salads, grilled meats, dressings. Our olive grove and our oils are organic certified by the CAAE (ES-ECO-001-AN Operator 25339): Every year we undergo exhaustive controls to guarantee that we do not use fertilizers or synthetic treatments, nor do we apply herbicides and maintain a respectful agricultural activity with the environment. Our Extra virgin olive oils are therefore free of residues and are highly appreciated by consumers concerned about a healthy and sustainable diet. 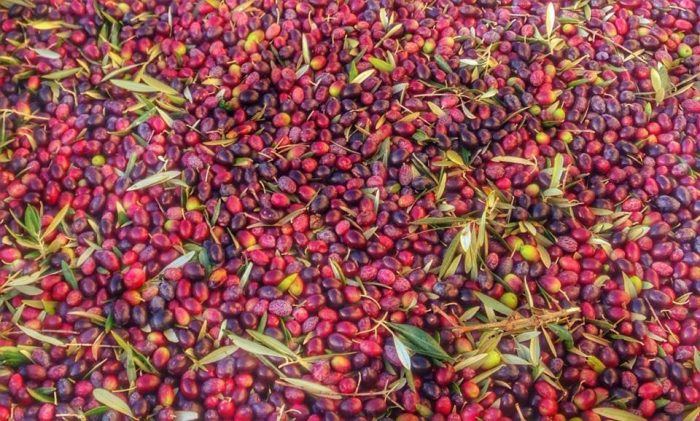 In 1948, Oleum prevailed for excellence, therefore, 100% of our production is organic extra virgin olive oil. Our territory is our greatest treasure, that is why we try to transmit our culture and our roots so that the consumer, in addition to acquiring premium aromas and flavor, also feels attracted by our geography and our history, thus creating an emotional bond based on trust and authenticity. From the beginning, we have been clear that 1948 Oleum is not just oil, it is something more. For this reason, we are committed, first of all, to quality. To do this, we waive the amount; We carry out an early harvest, when the olive is still green, before maturing (purple/ black tones). Thus, at the beginning of November, the oil produced and stored in each olive reaches its maximum value, thus managing to capture all the aroma and flavor of the countryside, with the characteristic nuances of each variety. Although it is true that harvesting later (the olive harvesting campaign in Andalusia lasts until the end of March), the fat yield is higher, so more kg of oil would be obtained, but with one more mature, less green nuances. , of lower quality, although they are still virgin or extra virgin (EVOO). Most commercial EVOOs come from a very ripe olive, it is a shame that many consumers have never even tasted an early harvest EVOO. In addition, we are in this, another positive quality is that the content of natural antioxidants, the well-known polyphenols, are also in a higher percentage, thus achieving two objectives: The first of them is to obtain an oil with properties and qualities that are beneficial to health. , since many studies and investigations show that these substances protect against certain degenerative diseases. The second objective is to delay the process of maturity and rancidity. The oil, whether in the tank or in the bottle, is still alive. 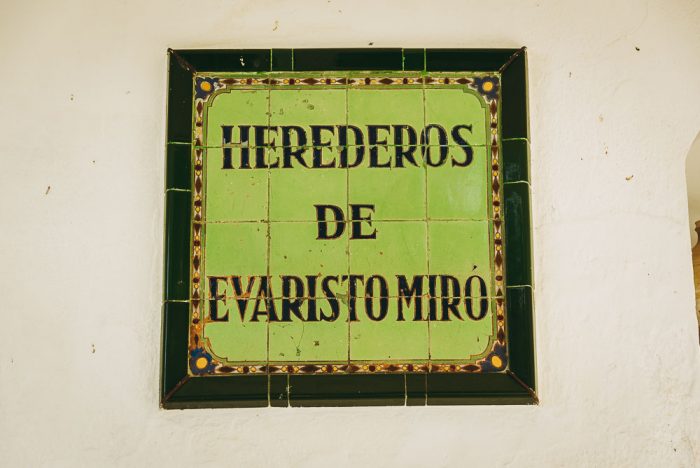 But, unlike wine, unfortunately, the quality of the oil does not improve over time, it evolves. In the first months, its nuances mature. In the Arbequina variety, for example, an early harvest EVOO that had banana nuances, was reminiscent of greenish yellow banana, tight and tight; But, that same EVOO packed in November, when you open the bottle a few months later, it will remind you of a delicious fruit or ripe banana porridge. As excellent as it may be, as the years go by, that precious bottle will uncover a rancid and unbalanced oil. Not spoiled, because olive oil does not expire, but it will only be a reminder of what it was. Therefore, the higher the polyphenol content, the longer we can enjoy its fresh flavor. For example, in 2019, our Picual variety contained 1443 mg / kg of oil, considered healthy above 250 mg / kg of oil), this is almost 6 times healthier. All these positive attributes are what we try to make known and disseminate, with the help of chefs such as Daniel del Toro or emblematic restaurants such as Maria Castaña, La Tabernita, Ágora or Laurel, where they cook typical Ecijan, Andalusian and Mediterranean dishes with our two varieties of organic EVOO. A pleasure for the senses of visitors and local consumers, who are, after all, the best ambassadors of 1948 Oleum, because they know that we are something more. 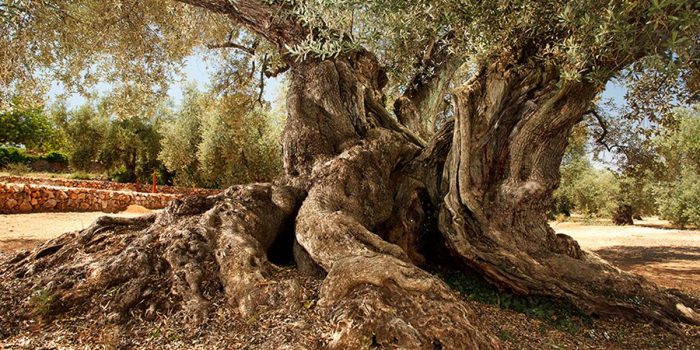 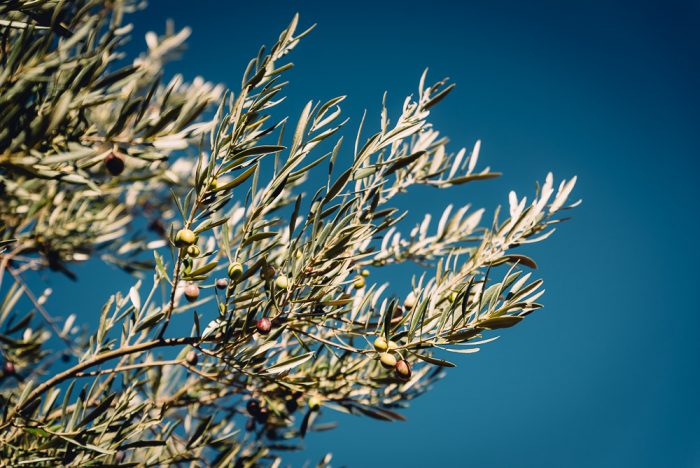