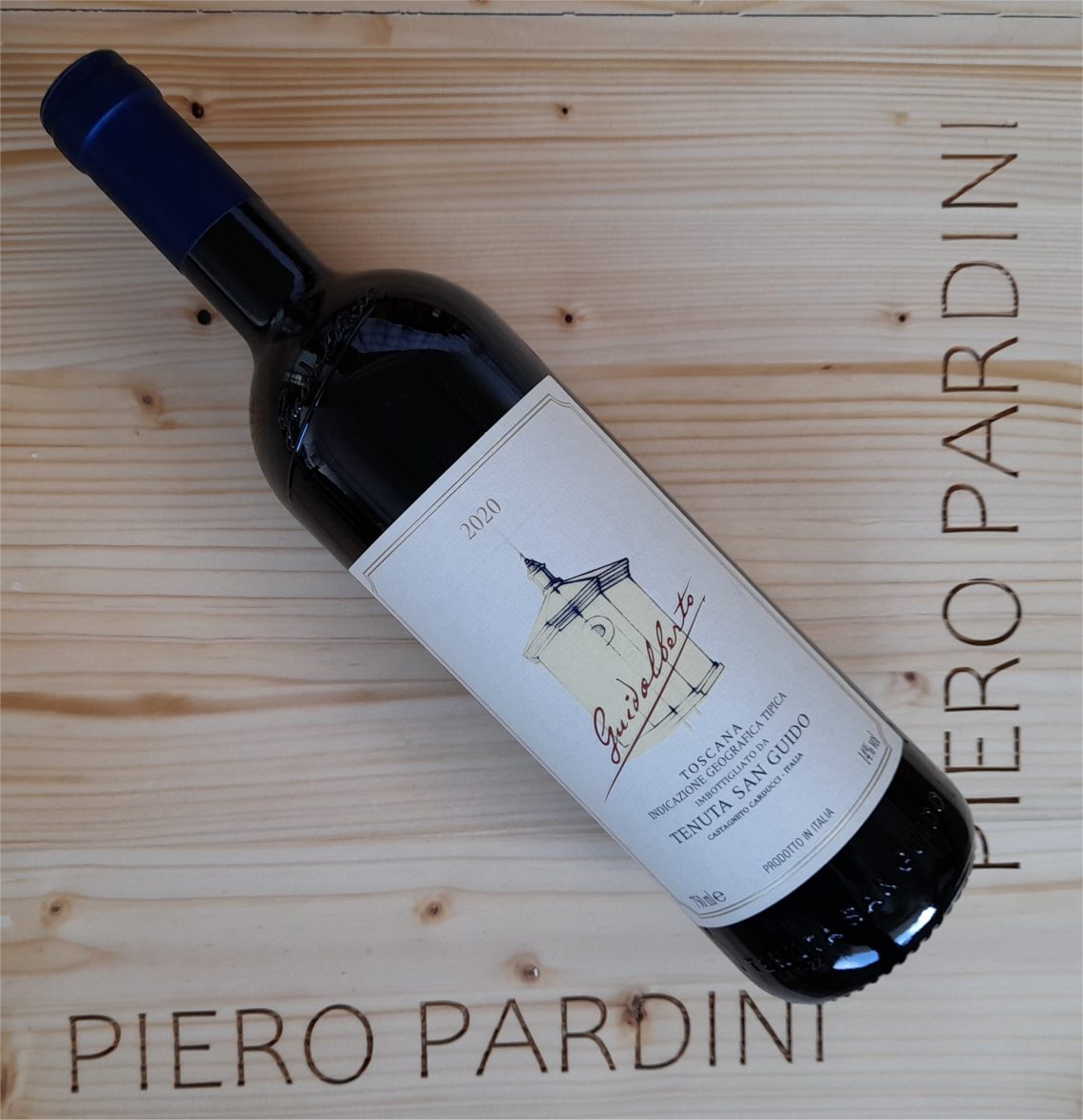 Wine: Guidalberto
Variety composition: 60% Cabernet Sauvignon, 40% Merlot.
Denomination: I.G.T. Toscana.
Alcoholic strength: 13% vol.
Vintage: 2020.
Land: the soils have varied and composite morphological characteristics with a strong presence of limestone areas, rich in Alberese and Gabbro, as well as stones and pebbles, and are partially clayey.
Altitude: 100-400 m a.s.l.
Exposure: West / South-West.
Training system: spurred cordon.
Plant density: 6,250 vine stocks per hectare.
Climate trend and characteristics of the year: Generally a hot year. The autumn was humid with heavy rains that occurred from mid-October and lasted until the end of December. Temperatures were somewhat mild and, at times, even above the seasonal average. Since February, the intense cold has arrived with temperatures that have dropped approaching 0° C. March began with strong sea winds and rains but with mild temperatures that contributed to the swelling of the buds, especially of the early varieties such as Merlot.
At the end of March, a disturbance from the north led to a sharp drop in temperatures with north winds and even some night frosts. This weather condition did not create excessive damage to the vines but however, in some Merlot plants located at lower altitudes and where the buds were in a more advanced stage of development, there was a bud selection. This caused the vegetative development on the “axillary buds” or secondary, resulting in a lower production per plant. A fact that affected about 30% of the Merlot vineyards. Although this aspect determines a lower production, it has the advantage of offering a better quality and concentration of the fruit. The month of April and most of May were mild with the alternation of sunny days and average temperatures with rainy days and cooler air. Daytime temperatures tended to increase in seasonal values, unlike those at night which remained below the seasonal average. A weather condition that has slowed down the vegetation of the plants. The first decade of June was affected by abundant rains (especially from 8 to 11 June) and lowering of temperature especially at night and early in the morning, with temperatures not above 25-26 degrees. A rather unusual spring that did not cause damage to the vines but led them to greater vegetation and production during the late spring. Situations that required greater attention from agronomists (control of funguses) and interventions on the field to control the vegetation. In mid-June, the climate recovered, bringing sunny and warm days. The heat was later interrupted by a disturbance in mid-July which contributed to lower temperatures and offered coolness to the vines. August, on the other hand, was a very hot month with temperatures well above the seasonal average and causing an early technical ripening of the grapes. Fortunately, a disturbance that occurred at the end of August prevented the plants from going into stress, but the ripening of the grapes, due to a hot and sultry climate, led to an anticipation of the harvest period by about a week. The grapes, although with a higher sugar content, were of excellent quality, with adequate phenolic ripeness. In this vintage of Guidalberto there is a higher percentage of Merlot, compared to the norm, due to the excellent ripeness of the grapes which gave excellent results. Acidity and PH in balance and important structure of the musts (average extract around 32 mg / l) as well as freshness.
Harvest: The harvest, all done by hand, began with the Merlot at the end of August and continued from 6 September with the Cabernet Sauvignon. The harvest ended at the end of September. It was faster in 2020 due to the rapid maturity reached by the grapes, and not wanting to exceed the alcohol content, but also due to the lower production. The cause of this lower production is due to the late spring frosts which affected the primary buds.
Winemaking notes: Sorting of the grapes in the field during manual harvesting and subsequent selection upon arrival in the cellar using a sorting table. Soft pressing and de-stemming of the bunches to avoid the pressure of the grapes and excessive release of tannin. Alcoholic fermentation carried out in stainless steel vats at a controlled temperature maintained around 27-29 ° C, without the addition of external yeasts. The macerations of this vintage were slightly reduced: about 12-14 days for the Merlot and 13-16 days for Cabernet Sauvignon grapes, with frequent pumping over in the air and delestage to obtain more balanced musts, favoring aromatic extraction and softening of the tannins. The malolactic fermentations, which began in late October and were completed in mid-November, were also carried out in steel tanks, without inoculation. From the beginning of December, the musts were placed in barriques for 15 months of aging.
Ageing: Aging in 225-liter barriques in partly French oak and partly (20%) in American oak for a period of 15 months. Use of 45% of new wood, 30% of second passage woods and 25% in equal shares of third and fourth passage. Subsequent aging of 3 months in glass before the start release on the market.

Review:
Limpid, intense ruby ​​red color, good consistency.
The olfactory range is wide and complex. Hints of freshly cut red flowers, followed by aromas of red berries and cherry durone. The range of addictive scents closes with notes of aromatic herbs and a nuance of dark spices.
The sip is pleasant, important, with perfectly smooth tannins. The finish is particularly long and persistent, reminiscent of a ripe fruit accompanied by a scent of spices.
Tried in combination with larded quail.

—
Other company labels in Wine Guide
—