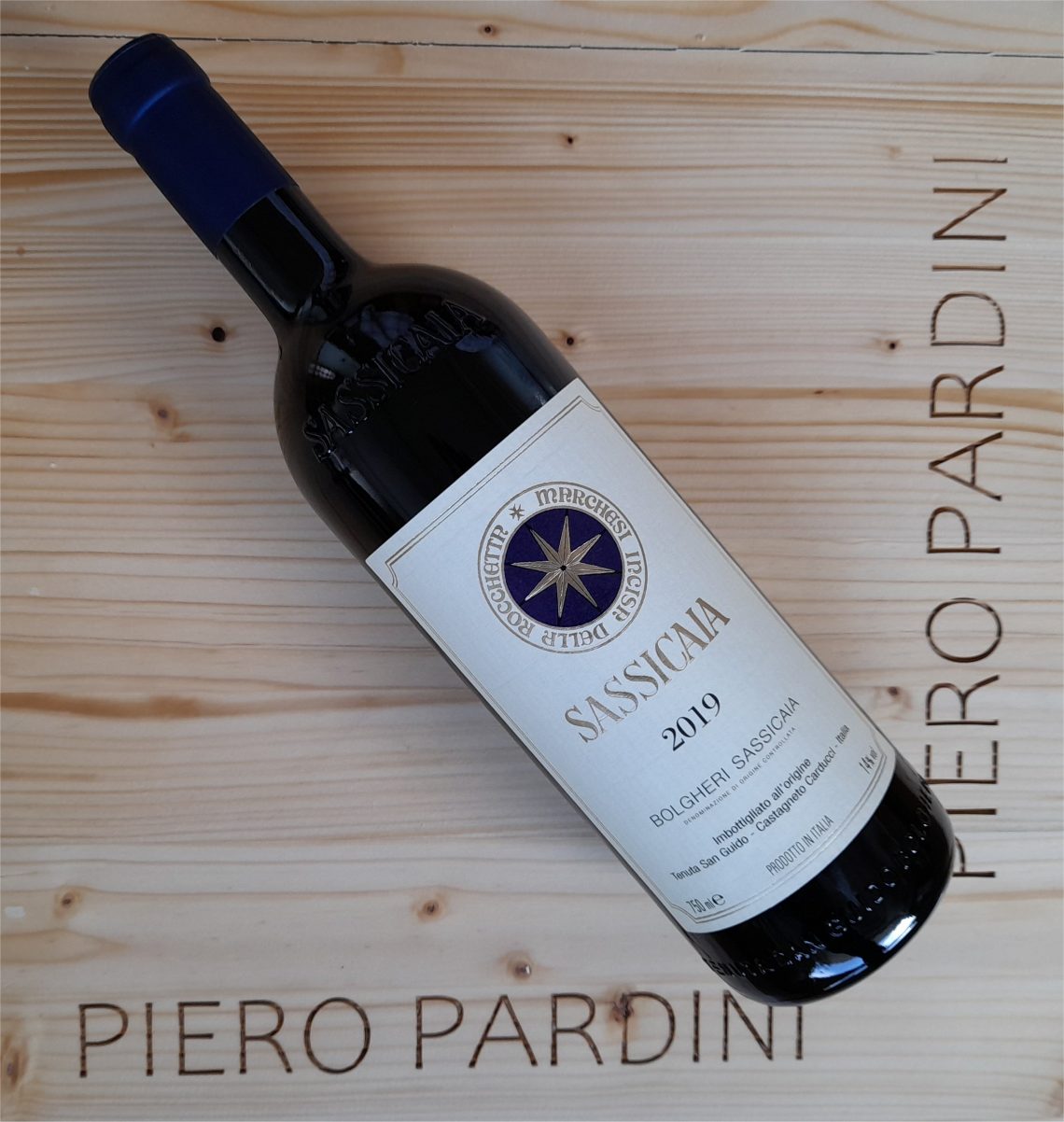 Wine: Sassicaia
Variety composition: 85% Cabernet Sauvignon, 15% Cabernet Franc
Denomination: D.O.C. Bolgheri Sassicaia (D.O.C. Sassicaia).
Alcoholic strength: 13,5% vol.
Vintage: 2019.
Land: the plots of land that are suitable for the production of this wine are included in the territorial delimitation of the DOC SASSICAIA and entirely within the boundaries of Tenuta San Guido. They show different and composite morphological characteristics, with the presence of limestone areas rich in marl, as well as stones and pebbles (from which the wine takes its name) and partially clay.
Altitude: 100-300 m a.s.l.
Exposure: West / South-West.
Training system: spurred cordon.
Vines density per hectare: from 3,600 vines / ha to 5,550 vines / ha for older plants and 6,200 vines / ha for more recent ones.

Climate trend and characteristics of the year: An excellent year of great quality and ripeness of the grapes, although the production was slightly lower than average. After an autumn with mild temperatures and frequent rains, the winter was quite dry and with temperatures often above the seasonal norm. Spring has come a little early and, from mid-March, the beautiful sunny days and the consistent increase in temperatures have anticipated the swelling of the buds. However, in April the climate changed again with a substantial drop in temperatures and the return of rains. The whole month of April was very rainy, and this situation normalized the water supply of the soils. Two short, small hail storms at the end of April, helped to thin out the young shoots but without compromising the production potential. The continuation of spring was rather unusual with rains and cold temperatures also affected by the north winds. A climatic condition that has imposed great attention on the vineyards by agronomists and which, at the same time, has delayed the vegetative growth. Since the end of May the weather conditions have improved and since June summer has arrived with sunny days, normal temperatures, and excellent ventilation (especially at night).
Favorable climatic conditions that allowed an excellent development of the most important phenological phases of the vine (flowering and fruit set). Flowering took place between the end of May and the beginning of June, starting from the vineyards located more in the plains and ending in the vineyards located on the high hills. Excellent fruit set which took place regularly and in completely optimal weather conditions. Smaller bunches with the right number of grapes per bunch.
The end of June saw intense temperatures but fortunately this sultry heat lasted only for a short time, stabilizing the continuation of the summer on temperatures well within the seasonal average. Thanks to the sea breezes and the good diurnal range, the plants were able to benefit from excellent ventilation that favored the development of aromas. A disturbance which occurred in July between Sunday 7 and Monday 8, brought further benefit to the plants and the rain restored the optimal conditions of the soils. July and August were hot months but still with normal temperatures, without any excess, except for the last week of July where the intense heat persisted for about a week. Immediately after mid-August, rains occurred which brought refreshment and helped normalize the vitality of the plants. The phenolic ripening of the grapes took place slightly later than in previous years by about 7-8 days. The lower temperatures from the end of August allowed the grapes to reach an excellent balance between technical maturity and phenolic maturity. A wonderful situation as it occurred in 2016. The significant temperature range between night and day favored the growth of very crunchy and healthy grapes. Beautiful immediate extraction in young musts and good concentration of the fruit. Sugar levels on average of 230 g / l on Cabernet S. and 240/260 g / l on Cabernet F and perfect analytical values. It is a Sassicaia vintage that is characterized by a strong aroma but also by a present but not intrusive structure. The tannins are soft, almost unnoticeable but still with a wine of great extract (33.5 g / l dry extract).

Harvest: The manual harvest began in the second week of September with the Cabernet Franc grapes and then continued with the Cabernet Sauvignon, starting first from the vineyards located at lower altitudes and ending in the first decade of October on the hills over 300 meters above sea level (Vigna di Castiglioncello and Vigna del Quercione).

Winemaking notes: Selection of the grapes through a sorting table, to eliminate impurities and any presence of imperfections. Soft pressing and delicate destemming of the grapes by means of suitable machinery not to break the integrity of the berries and avoid excessive release of tannins. The alcoholic fermentation (completely spontaneous and without the addition of external yeasts) ended in mid-October and took place with regularity and maximum temperatures of 26°-27° C. Frequent delestages and pumping-over have allowed an excellent aromatic extraction and freshness in terms of acidity of the musts. The malolactic fermentations, (always without inoculation), carried out in steel were completed regularly at the end of November thanks to the low external temperatures. In early December, after frequent decanting to clean the musts, the wine was put into barrique from the first ten days of December 2019.

Ageing: At the end of the malo-lactic fermentations, the wine was put in barrique using 40% of new wood, 40% of first passage and 20% of second passage. We used French oak barrels (Troncais and Allier in particular) with a fine grain and light toasting so as not to abound in the release of tannins. Sassicaia 2019, after about 25 months of aging in wood, was decanted into steel tanks and further selected before final assembly and then bottling. Subsequent refinement in the bottle before release.

Tasting Notes
Upon examination in the glass, the sample is limpid, ruby ​​red in color, bright, intense, with a good consistency.
On the nose, despite its “youth”, it offers a variegated and complex scent of aromas. The bouquet of scents is an expression of the territory, with hints of cherry, aromatic herbs, the Mediterranean scrub, the undergrowth, and a nuance of toasted almonds complete the aromatic riot, of very fine and intense quality.
On the palate it seduces with its pleasantness and aromatic strength. Its fresh acidity is well supported by an important but well composed tannin. Each of its components is perfectly balanced and well defined. A wine to drink, but also to keep for a special event.
It is recommended in combination with traditional Tuscan grilled meat dishes.